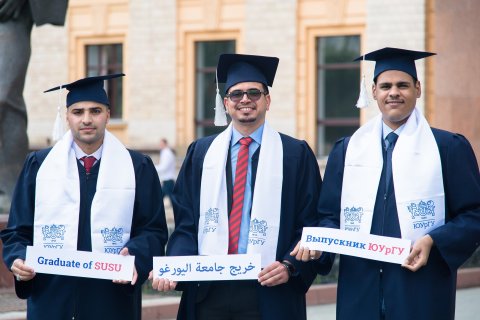 Each year, international students from different countries and various majors graduate from South Ural State University. Their great accomplishments include research articles, conference presentations, certificates, and active participation in extracurricular life of the university. A few of them shared their success story with us. Institute of Architecture and Construction

“Pursuing my master’s degree at the Institute of Architecture and Construction, I had a great opportunity to be exposed to research activities. Together with my academic advisor, I had a great opportunity to write an article for an international scientific journal which is called “The Bioclimatic Analysis of the Constructivism Monument – House of Architect K. Melnikov”. Inspired by this experience, I am currently working on my other publication devoted to the architecture of Columbian Amazon inhabitants which should help me to get a promotion as a research assistant. During my study at SUSU, I benefited not only from interacting with SUSU’s professors but also from meeting experts in my field outside the SUSU while attending international architectural competitions. This experience allowed me to meet people and build professional connections. Simultaneously with my main degree in SUSU, I had a chance to obtain professional education at the Strelka Institute in Moscow. SUSU has become for me not only the connection with the professional community but also with the rich  Russian culture.” 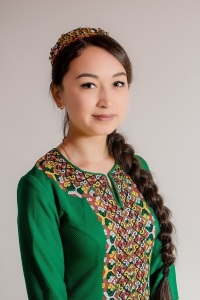 Institute of Linguistics and International Communication

“First time I left my home country and came to SUSU to pursue my degree in International Studies in 2015. Professors and staff at SUSU were very welcoming and helpful which allowed me to go through the cultural adaptation process very smoothly. Here I met many new friends and got familiar with other cultures. The multicultural and welcoming environment in SUSU helped me to widen my horizons and motivated me to actively participate in campus life activities.  Generally, I very much enjoyed taking part in large events and one of the most memorable events for me was the World Festival of Youth and Students 2017 Sochi. The University offered me to participate in this Festival and supported with the application process. Attending this fabulous event, I greatly expanded my knowledge about global problems and possible solutions.  Together with the team, we were building the future world concept! I also actively participate in SUSU’s associations and events.  Being a representative of Turkmen students at SUSU’s Association of International Students (AIS), I help new students with academic issues they face and cultural adaptation.  Also, I help to organize cultural events, such as  Nawrus” and Festival We are Different, but We All are Together. I also had a great chance to intern at the Center of Sociocultural Adaptation at SUSU which allowed me not only to expand my knowledge in intercultural communication but also to share my multicultural experience at the cultural forums, such as “Morning-2019” in Tyumen. I participated in the discussion about intercultural communication and how to make it more successful . Also, three years in a row I participated in an annual educational campaign called “The Nationwide Dictation Quiz” aimed to test the knowledge of the Russian language and I was always awarded the winning prize. Friendly speaking, my study experience at SUSU has become the foundation for my future career in intercultural communication. SUSU has become my second home after my family home.” Institute of Sport, Tourism, and Service

“During my study at SUSU I was actively involved in the Association of International Students (AIS) where I served as a representative of the students from Iraq. It was my honor to initiate and organize cultural events on institutional and regional levels devoted to Arabic culture, one of them was the Day of Arabic Culture. Besides that, I supported international students to go more smoothly through their adaptation in SUSU and promoted intercultural friendship among students. I also initiated and organized sport events in AIS, such as mini-football, billiards, basketball, badminton championships and International Sport Festival. Sport is generally is an important part of my life. and football is my passion. I serve as a football referee on national and international tournaments and played in a SUSU’s international football team. Last year our team took the second place in the 8th Annual City Mini Football Tournament among National Youth Teams. My active participation was awarded during the SUSU’s Best Representatives Festival. SUSU is my second home which I love so much! Here I met great professors and staff who is always ready to help. I met lots of different people in SUSU, most importantly people from different countries. It is amazing that SUSU unites all us together!” 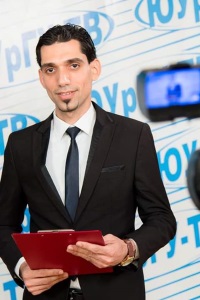 Institute of Social Sciences and Humanities

“While studying at the Faculty of Journalism, I had great opportunities to participate in multiple projects and conferences which significantly expanded my knowledge in the field. During the forum of “Communication Leader of the XXI century”, I made a presentation aimed to highlight the importance of fact-checking in media.  Most recently, my article “Election-2019 in European parliament 2019” was published on SUSU’s Portal. The culmination of my study was my master’s thesis devoted to Arabic news coverage in Russian media.  My experience at SUSU could not have been better! I am very glad to have an opportunity to study at SUSU where I gained knowledge from the best professors. Here I met new friends and established connections with people from different cultures and countries. I am eager to continue my education at SUSU and planning to start my PhD program soon.” Institute of Linguistics and International Communication

“I always wanted to become a teacher of the Russian Language and Culture at Chinese school and I came to SUSU to study Russian. I have been working on improving my Russian very hard, took multiple language tests and obtained the third certification level. This certificate allows me to conduct professional activity such as teaching the Russian language abroad. My interest in Russian language and culture inspired me to write my master’s thesis about Russian and Chinese proverbs. The findings I presented at scientific conferences. In SUSU I got familiar not only with the Russian culture but also with other cultures, such as Indian, Turkmenian, Arabic. Being a representative at the International Student Association, I helped to organize cultural events, such as Nawrus, The day of Arabic Culture and New Year’s in the Tradition of the Island of Sri Lanka.  I want to say that SUSU has become for me not only a university but a family. Here I met well-respected professors and new friends who made me to believe in myself. I am grateful to SUSU for education, motivation, and inspiration! I wish our university development and prosperity!” School of Economics and Management

“During my study at SUSU, I had multiple opportunities to participate in various olympiads, festivals and conferences and I always tried to do my best. Annually, I participated in the Green Apple International Festival of Marketing, Advertising and PR-communications and took prizes in different contests.  I also had a great chance to test my knowledge in Economics and Management at the International olympiad in Saint-Petersburg where I was awarded the second prize. Along with my study, I actively participated in campus extracurricular activities. Being a Mongolian representative in the International Students Association, I helped with the organization of cultural events and supported new coming international students with their adaptation. I am also a big fan of  sport and participation in sports events at SUSU helped me develop this passion. I played in n a flat ball team and we usually take the winning prizes at the tournament. I also volunteered at World Taekwondo Championships, in 2015. Overall,  I had a very enjoyable time at SUSU. Our University for me is not only the place to study, but it is also my second home, my big multicultural family. Here I met  people from different cultural backgrounds who became my best friends. I am so grateful to professors that taught me, they are like parents for me.  I always felt that I belong to SUSU’s big family.”