Research in the sphere of ecology is one the three prioritized directions of research and educational activity at South Ural State University together with digital industry and materials science. Implementation of ecology-related projects of the university in cooperation with such partners as Rosprirodnadzor Directorate for the Chelyabinsk region, Emerson Corporation and MMK PJSC is targeted at formation of a favorable environment in Chelyabinsk and the region.

One of the most important directions of the university’s development is ecology. Relevance of this research direction is, first of all, predetermined by the region’s needs. Chelyabinsk is a city populated by 1 million people; there are more than 10 large industrial enterprises, mainly metallurgical ones, located in the city. According to the Rosprirodnadzor Directorate for the Chelyabinsk region, Chelyabinsk is placed the 12th among Russian cities by the mass of pollutants emitted by industrial enterprises and motor transport. The totality of ecology-related problems raised a pressing issue on the necessity to establish Centre of Excellence at SUSU in order to solve environment-related problems. Research fellows and faculty staff united their efforts in a number of ecology-related projects.

In June of 2017, SUSU and Rosprirodnadzor Directorate for the Chelyabinsk region signed an agreement intended for cooperation in the main spheres of operation.

For example, by a reference to the parameters and goals of a monitoring system of an industrial enterprise, based on the experience of Rosprirodnadzor for the Chelyabisnk region, functions of the innovative software model, which calculates emissions of an enterprise and helps preventing air pollution instead of fighting its consequences, have been determined. This joint invention will allow creating one of the essential mechanisms to ensure implementation of the national project called “Ecology” in such cities as Chelyabinsk and Magnitogorsk.

Specialists of the university took part in formatting of a number of expert testimonies on the harm caused, which were used in surveillance activity of the Rosprirodnadzor.

Within the International Scientific Council meeting held at SUSU on May 31st through June 1st, President of Emerson Company Michael Train highly praised the strategy of development targeted at improvement of the environmental situation.

“Such direction as ecology, as I think, is very topical. Today, research carried out at SUSU is of interest for the whole world. Scientists of the university are solving the problems of water shortage and air pollution. In a short period of time, SUSU has made a considerable progress in research in this direction.” 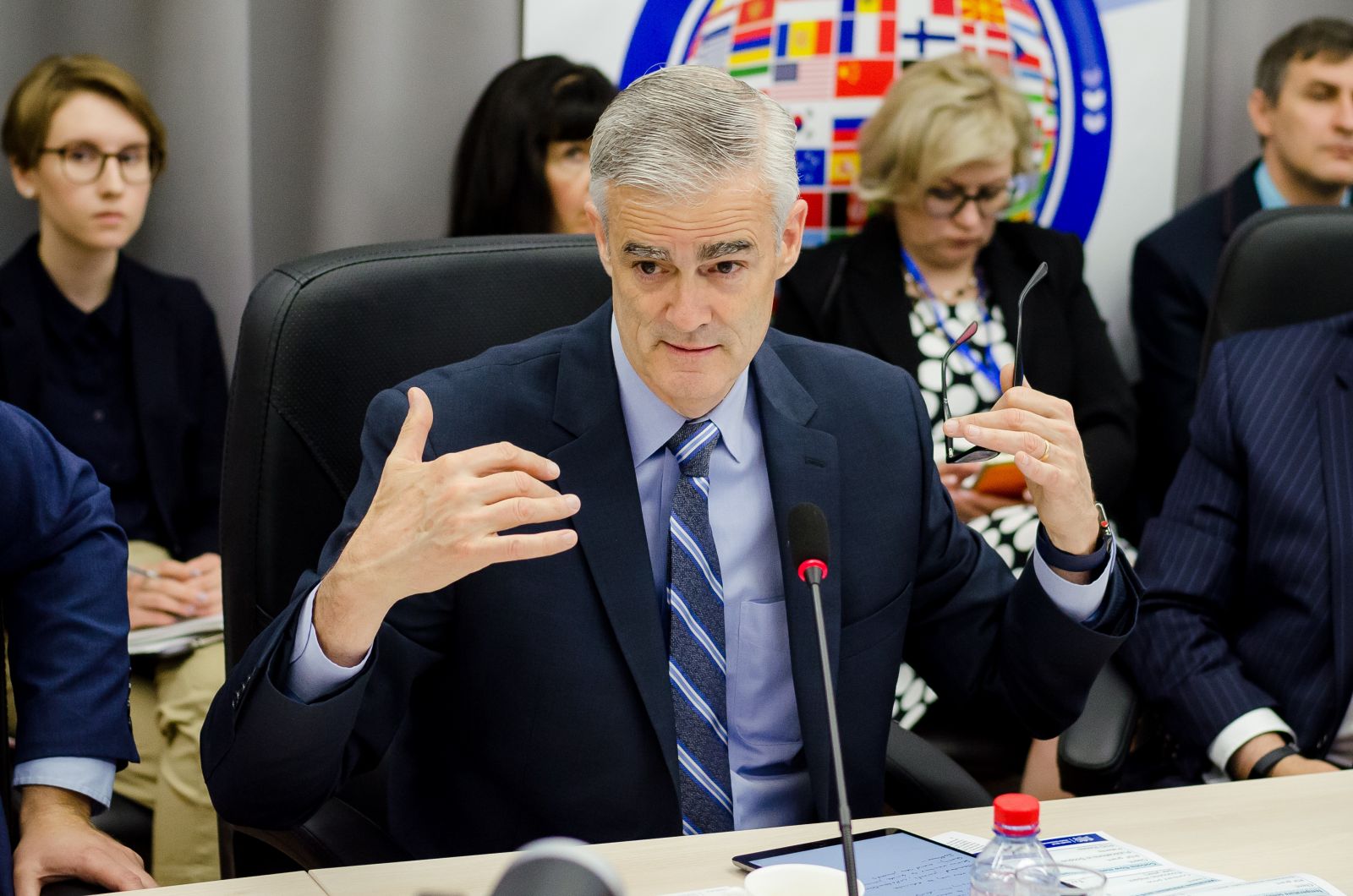 President of Emerson Corporation, Michael Train, emphasized that ecology is one of the key research directions.

For over 30 years, South Ural State University has been performing training of specialists in the sphere of ecology. These specialists have acquired a good reputation for themselves in the region and beyond its borders. There are more than 20 PhD theses defended on ecology-related problems. Every year, more than 10 research articles get published in journals of Top-25 level, indexed in Scopus and Web of Science databases. 3 to 4 scientific grants and more than 10 projects get implemented upon orders by enterprises. Thus, the university has a considerable educational and research background in ecology-related problem solving.

“A set of actions targeted at improvement of environmental situation was determined by a Presidential Decree, and a national project entitled ‘Ecology’ was approved at the end of 2018. In this regard, the university has set the goal to establish a Russian Federal Centre of the Best Available Ecology-Related Technologies and Competencies. The set goal is to be fulfilled within the following blocks: Clear Air; Clean Water; Developing a Technology for Solid Waste Recycling; Environmental Law; and Humanitarian Eco-Engineering. Active work is being done in each of the directions, and various departments of the university get involved,” says research fellow of the SUSU Research and Innovation Services, Oleg Bolshakov. 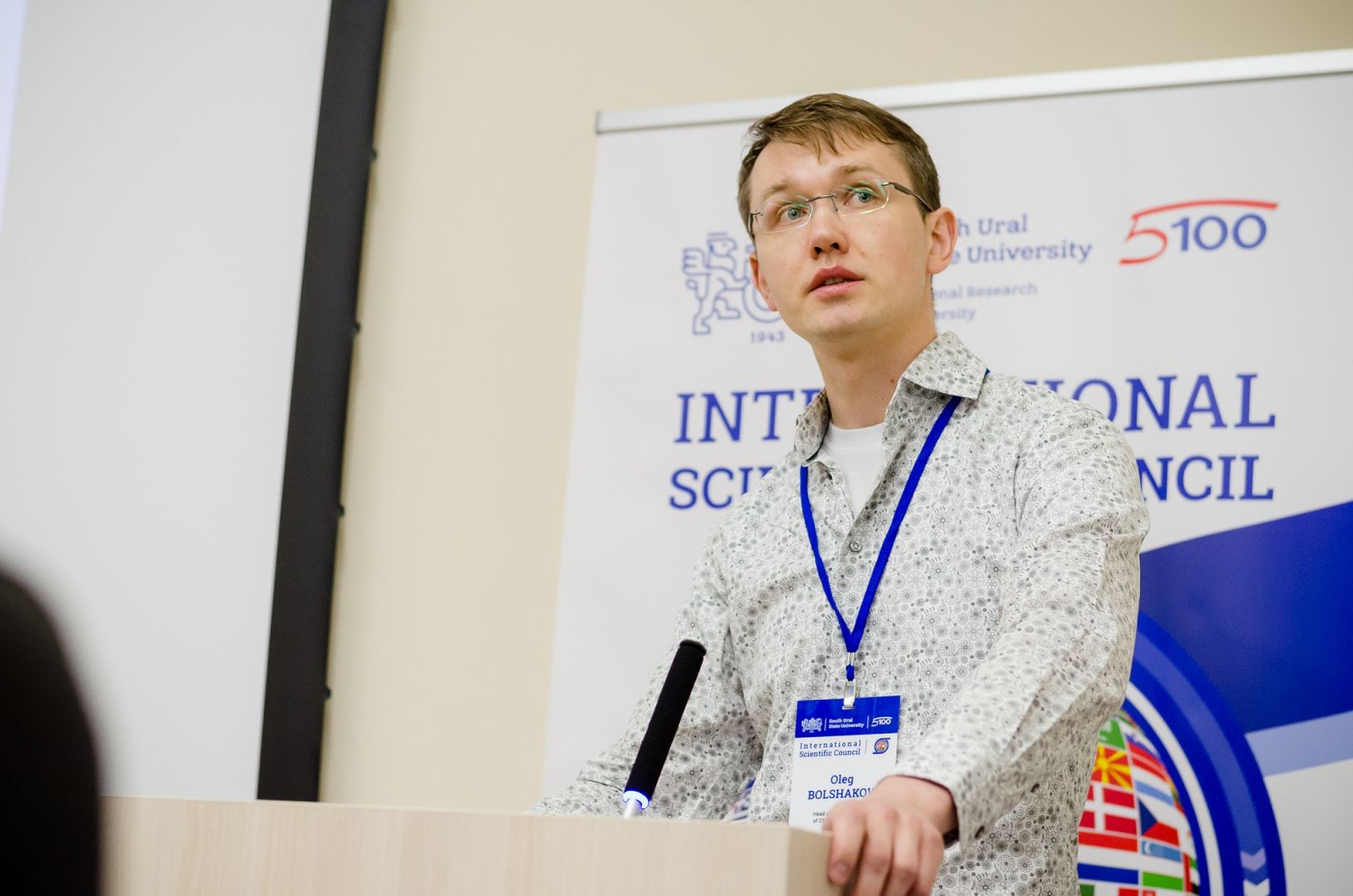 What do we breathe with?

Air pollution is one of the most urgent problems of the humanity. According to the World Health Organisation, 9 out of 10 people around the world are breathing with polluted air. At that, there is no an efficient tool yet which would allow for online assessment of the impact that each source of pollutant emissions – motor transport or enterprises – have on the ecological state of the city aerial environment.

The problem is to be solved by Eco-monitor, an interdisciplinary project of the Institute of Natural Sciences and Mathematics of South Ural State University. Its end product is a computer program which implements a mathematical model created on the basis of unique inventions of scientists with regards to the contemporary global experience.

“We need to know the concentration of each substance within certain territory and whether it is safe to stay there. If there are several industrial enterprises located in a certain part of the city, we need to take into account the contribution of each of them into the air pollution. This is why we are developing the mathematical model and the software for the ecology monitoring system,” says the project leader, Associate Professor at the SUSU Department of Applied Mathematics and Programming, Dmitry Drozin.

Prototype of this software has been developed. It calculates distribution of pollutants throughout the territory based on data obtained from the network, and allows for not only determining concentrations of pollutants in any location but also calculate alteration of these concentrations depending on weather conditions. In a prospect, the software is going to take landscape into account. Partners on this block of research are: Rosprirodnadzor Directorate for the Chelyabinsk region, the Ministry of Ecology of the Chelyabinsk region, and MMK PJSC. Director of the Department of Analytical Equipment and Environmental Programs at Emerson Company, Aleksandr Moev: Emerson and SUSU are planning to work together to improve the ecology in the region

Moreover, formation of air monitoring systems with the use of sensors produced by Emerson Company is considered for the nearest future. Director of the Department of Analytical Equipment and Environmental Programs at Emerson Company, Aleksandr Moev, noted that the partnership between SUSU and Emerson might have a positive effect on environmental situation in the region.

“We work on modelling of environmental situation, and our role is to help setting the goals and adjusting research solutions for their practical application. In the future, we have plans to create a joint laboratory which would develop new applications for ecology.” Dean of the Faculty of Chemistry of the SUSU Institute of Natural Sciences and Mathematics, Vyacheslav Avdin: SUSU managed to develop new photocatalysts for water treatment

Another interesting project conducted by South Ural State University scientists is an integrated system of eco-treatment of wastewater from agro-industrial enterprises which affect the environment quite notably. Agriculture and food industry enterprises produce a considerable amount of organic wastes which quickly decompose and emit toxic compounds. Purification of wastewater from such enterprises requires special approaches. For that, South Ural State University scientists proposed to create constructed wetlands and use hybrid techniques based hydrodynamic cavitation and photocatalysis.

“The invented photocatalysts are 5 times more active compared to their commercial analogs. Photocatalysts are TiO2/SiO2 mixed metal-oxide, in which photocatalytically-active TiO2 grains sized about 5nm are evenly distributed in an inert silica gel. These materials are efficient in regards with resistant organic compounds, including phenol, benzo[a]pyrene, dyes, pesticides, herbicides, etc.,” Vyacheslav Avdin, the Dean of the Faculty of Chemistry at the SUSU Institute of Natural Sciences and Mathematics, describes the essence of the method.

One of the prospective inventions by SUSU scientists is the project called “Sorbent”, which has been being implemented for more than 15 years. The university researchers invented a sorption material which has no analogs around the world and which is capable of irreversible absorption and withholding of heavy metal cations, including radionuclides, in its structure. Metals-pollutants get included into the sorbent’s structure with the following mineralization (the process is analogous to the natural formation of ore minerals). Return of heavy metals into the medium under treatment is impossible without application of special techniques.

“The invented sorbents are cheap and easy to use. They have proved themselves to be excellent in irreversible sorption of not only heavy metals but radionuclides as well. The project has been highly praised by the Ministry of Ecology of the Chelyabinsk region and the Rosprirodnadzor Directorate for the Chelyabinsk region,” emphasizes the project leader, Doctor of Sciences (Engineering), Professor Gennady Mikhailov, Head of the Department of Materials Science, Physical and Chemical Properties of Materials of the SUSU Institute of Engineering and Technology. 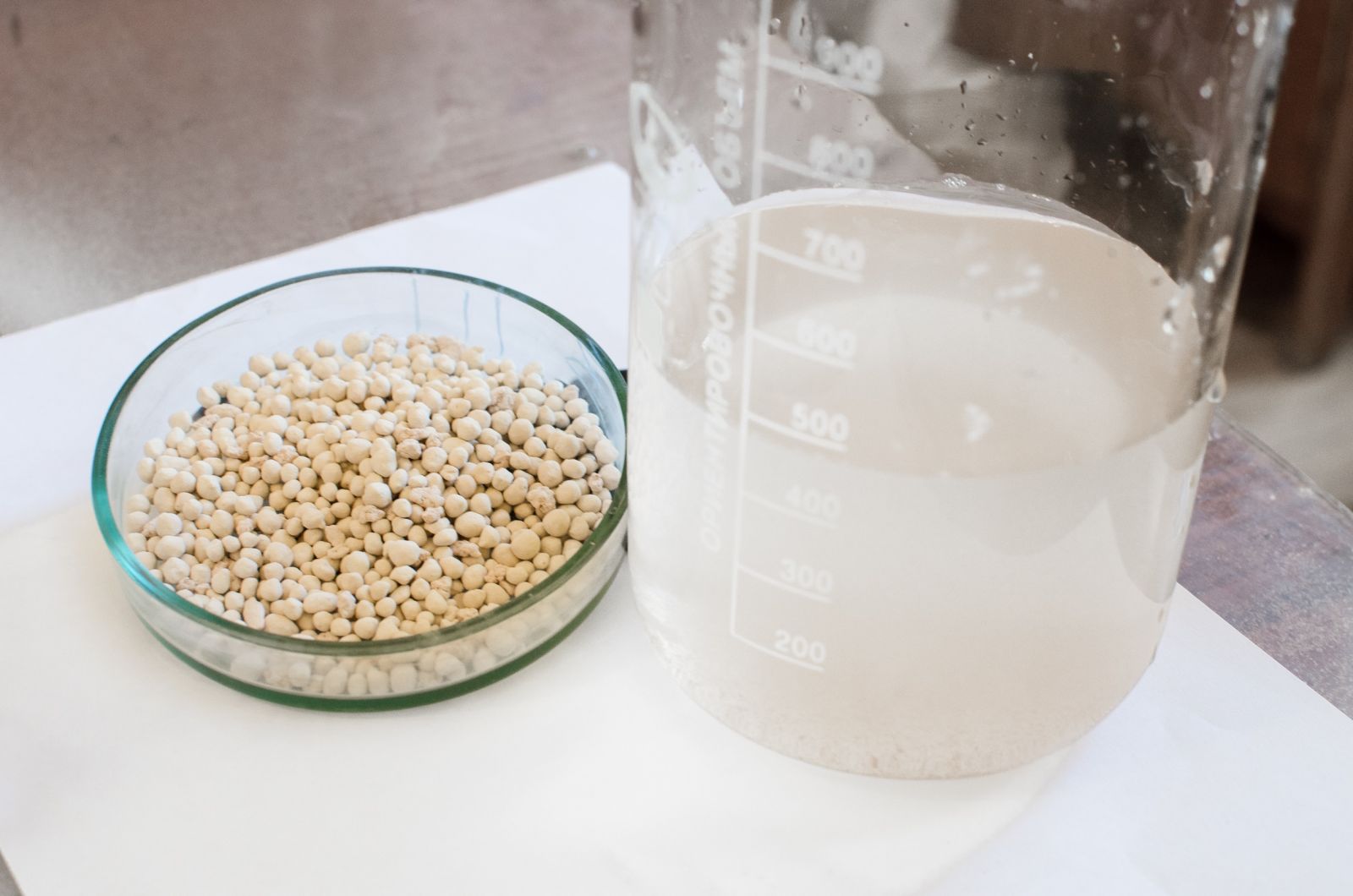 Mobile system of express-analysis of water has been being developed in cooperation with NPO Technomash Federal State Unitary Enterprise. The main requirements for the analysis systems are sensibility and selectivity. The technology under development is based on the use of fluorescent quantum dots. Analyzing unit weighs no more than 2 kilos and is currently being tested in Moscow.

In this research direction, South Ural State University established international collaboration with the University of Oviedo (Spain) and with Ghent University (Belgium). More than 20 articles have been published in journals of the Top-25 level (indexed in Scopus and Web of Science databases); 5 Candidate’s, 2 Doctor’s and 2 PhD dissertations have been defended.

Building houses out of wastes and forming an ecological worldview

SUSU scientists also propose an original solution of the problem regarding disposal of industrial wastes by using them in production of building materials, which simultaneously solves three problems: economizing the resources of energy raw materials, disposal of wastes, and improvement of environmental situation.

The scientists also invented granulated material used in oil-extracting industry in order to enhance efficiency of productive capacity of wells using the technique of hydraulic fracturing. The material gets obtained by a simple and efficient technique with the use of slags of copper-smelting and blast-furnace manufacture. Previously mentioned Sorbent project, designated to produce materials for purification of natural surface water, also includes application wastes of blast-furnace, ferroalloy and steel-working manufactures.

Humanitarian engineering is very important in development of outlooks for places of our future habitation, therefore, the block of research entitled “Technology of Humanitarian Eco-Engineering” includes two components: establishment and promotion of an image of the Chelyabinsk region and development of educational experiences and techniques, targeted at forming an ecological worldview among young people.

Development of a regulatory basis for solution of pressing ecology-related problems is the most important stage in preparation for improvement of the environmental situation in the region; therefore, employees of the SUSU Institute of Law are working on improvement and development of the current statuary frameworks of environmental regulation and on ecology-related legal support of enterprises’ activities in the block of research called “Environmental Law”.

Unique projects in the sphere of ecology, developed by SUSU scientists, allow for an efficiently fight against pollution of the environment, which is very important considering the industrial specificity of the region. The work in this direction, which is of high priority for one of the largest Russian higher education institutions, is to continue. Successful experience of SUSU scientists can be adopted by other regions of Russia with a difficult environmental situation or get applied around the world as well.

June 5 is professional holiday of Russian ecologists. The corresponding Decree No.933 as of July 21 of 2007 “On the Ecologist’s Day” was signed by the President of the Russian Federation, Vladimir Putin.

World Environment Day, or the Ecologist’s Day, is celebrated in practically all European countries. This holiday was established on December 15 of 1972 upon initiative of the UN General Assembly in order to “draw attention of the society on the necessity to safe and improve the environment”.

The day has been chosen for a reason as well: the first special UN Conference regarding the environmental issues was held on June 5 of 1972.