SUSU Scientific Library: Modern Technologies for the Comfort of Users 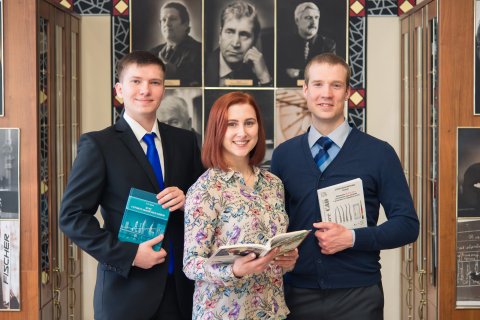 Russian Library Day is celebrated May 27th – this day is also called Librarian Day. At South Ural State University, the Scientific Library began operating from the moment of the university’s founding on December 15th, 1943. The Scientific Library is one of the most important parts of SUSU’s information space, preserving the results of the university’s research and academic work.

The SUSU Scientific Library is the largest library in the Ural region. It is a library and informational structure which includes the university’s central library, the libraries of four branches in Chelyabinsk and Tyumen regions, and three faculty libraries. The library has 32,000 users, including students, post-graduate students, and the university’s professors and staff. Since 2008, the scientific library has been headed by Candidate of Sciences (Pedagogy) Svetlana Smolina.

The library has unique collections including modern research, academic, and reference materials from Russia and abroad, as well as a collection of rare books from the 19th and 20th century. The printed collections are supplemented by millions of electronic documents: books, journals, newspapers, and audio and video materials.

“The library has a collection of around two million printed publications: books and periodicals in Russian and foreign languages. The library also has a license for access to twenty Russian and foreign electronic resources, which include around twenty million documents. Today, we are a modern, high-tech university library with a universal collection of books and electronic resources,” noted the director of the SUSU Scientific Library.

Priority on Increasing the Competitiveness of the University

The SUSU Scientific Library makes its contribution to the development of the university and supports university’s key areas with informational resources. The priority for the library, according to staff, is to support SUSU’s competitiveness in the global market of research and academic services.

The specialists of the library take part in the creation of scientometric reports and update the university’s profile, as well as the individual profiles of its staff. This makes it possible to monitor SUSU’s publication activity indicators in real-time, which is a very important component of the university’s development.

Modern Technologies for the Comfort of Visitors

The library uses one of the best international automated library informational systems – Virtua from the company VTLS (USA). This system organizes the operation of libraries’ electronic catalogues, automates all of the digital processes for serving users and work with the catalogue, and integrates the library into the university’s corporate information and analytical system.

The electronic catalogue of the SUSU scientific library contains bibliographic information of all forms of documents which make up the library’s catalogue, in Russian and in foreign languages: books, periodicals, articles, dissertations, abstracts, and full-text digital documents.

The library has specialized equipment for the convenience of people with disabilities. In particular, some of the tables are equipped with micro-lifts, allowing visitors to regulate the height of the tabletop. The computers are equipped with a speech synthesizer and a function for information input on a tactile Braille display. There is also a stationary electronic video magnifier, a portable device for text recognition and reading aloud, and much more.

The library’s visitors also actively use the library’s website, which presents information about the library, its structure, services, and resources, and allows access to full-text information. In addition, visitors can view their electronic logbook online so that they can return their books on time. The library also has an active presence on social networks.

Events for Students and Staff

The library pays special attention to scientific, academic, and cultural work. Student Olympiads and research conferences are organized with the participation of the library’s specialists. Library staff and invited guests – representatives of the largest suppliers of informational material – hold various trainings, seminars, and lectures. These events teach visitors to navigate high-quality information resources and understand the methods of searching for scientific information, and work with bibliographic data.

The library regularly organizes non-traditional meetings on library practices with visitors: training from the Ministry of Emergency Situations entitled “Anti-Health and Safety, or an Informal Conversation about Safety”, mind games, excursion quests around the library, and other events.

In honour of Russian Library Day, invitations are open to all who wish to participate in a closed excursion around the scientific library. Staff will demonstrate modern technologies and show what was used in libraries in the last century, and will also show the rarest books in the SUSU collection. Participants of the excursion will have the chance to take photos and videos. Registration is required. The excursion will be held on May 27th at 15:00.