Russian Scientists and Students Announced Development of a “Smart” House 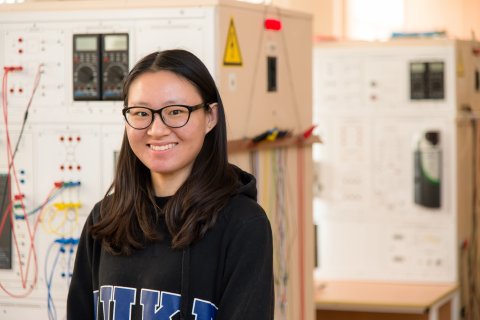 Within the technology of Industry 4.0 (the 4th industrial revolution), South Ural State University implements a number of prospective student projects, one of which is a “smart” house based on efficient energy consumption and an intelligent smart grid system.

“Smart House” is an innovative residential space which is not only efficient from the perspective of resource consumption (electricity, heat and water) but also well-designed regarding the aesthetics and comfort of its interior as well as its landscape design.

Project-based learning at SUSU is carried out on interdisciplinary basis: in order to implement a project, the team gets formed out of students of various majors and training levels. At first, there were 5 Master’s degree students taking part in developing the components form the “Smart House”. In half a year, the number of participants has increased to 17, including international students (3 students from China and 2 from Iraq).

“The project is ultramodern, prospective, highly demanded in the market and quite attractive for participants of any age, gender and education, because power supply and gadgets can be applied in one’s own house,” says Director of the SUSU Institute of Engineering and Technology, Sergei Vaulin.

Aside from the “smart house”, students and specialists at SUSU are working over other “smart” directions: power supply based on a mobile energy complex; smart accumulator based on a super-flywheel; smart yard (including a parking lot with sensors indicating the presence of a car, a system of yard monitoring, and power generation by a smart speed bump).

Gadgets for house control, software and systems for control, alarm and identification are being actively developing as well. SUSU students choose out of a wide range of objectives: electric power generation on the bases of renewable sources, power saving of all types, accumulation, alarm and monitoring systems, gadgets of any difficulty level, software and commercialization (of both the own project due to financing by foundations and/or sponsors, and of the global complex project in general).

Projects and education programmes of the Institute of Engineering and Technology get tested in leading laboratories of SUSU, established in cooperation with the world’s industrial leaders in the sphere of automation, digital transformations and power engineering. Also, the university carries out implementation of joint R&D projects in the sphere of power engineering and performs student exchange with North China Electrotechnical University (China) and Aristotle University of Thessaloniky (Greece).

“I am studying at SUSU on Master’s degree programme in Electric Power Engineering, and I acquire knowledge which are going to come in handy for my future work in the industry. When I came to Russia, I was surprised by the difference between the new-for-me country and my home country, China. Everything was different! At first, I was a bit nervous because I didn’t know how things here are going to work out. But I got adjusted quite fast. The method of teaching in Russia and in China is principally different: lectures and workshops here are more vivid and animated. Every lecture is interesting as you never know what the lecturer has got to surprise you,” says a SUSU student from China, Liu Lin.