A Formula for Health: Russian Scientists Design Medications of the 21st Century 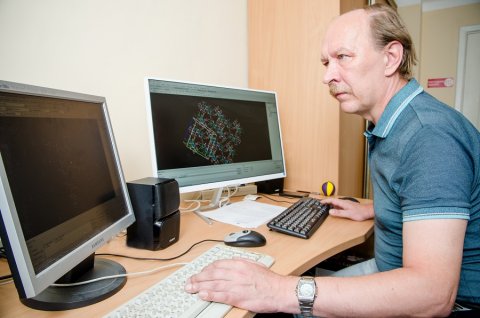 Scientists of the Computer-aided Drug Design Laboratory at South Ural State University help accelerating the process of designing and improve the medical formula of many vitally important medications, as well as eliminate their toxicity and heavy side effects. A new method of computer-aided diagnostics of molecules from both outside and inside helps achieving this.

Medications without side effect

Head of the SUSU Computer-aided Drug Design Laboratory which has been created within Project 5-100, Candidate of Sciences (Chemistry) Vladimir Potemkin works on research of medications and their biological activity. Uniqueness of this Laboratory is in the fact that scientists have a chance to carry out the entire cycle of designing new medications in an integrated manner.

“The thing is, the global problem of the pharmaceutic sphere is high toxicity and allergic capacity of many medications, even of those of very high quality. Development of a new medication is a very long and costly process. Usually, it takes 12 years and up to one milliard dollars to design one medication using a traditional trial-and-error method,” says Vladimir Potemkin.

The idea of researchers from South Ural State University is to invent new methods of forecasting the medications, which is going to shorten the process for two years at minimum. The research is carried out with the use of unique software invented by research fellows of the SUSU Computer-aided Drug Design Laboratory.

Studying molecules from both outside and inside

“It was 10 years ago that we proposed a method for development of new medications called ‘Cinderella’s Shoe’. The idea is to create a complementary field, and a molecule will fit into this field just fine. This is how we can design future preparations and their biological effect. This can be used for further virtual screening of potential medications,” explains Vladimir Potemkin.

This method assumed assessment of a molecule by its external characteristics, i.e. the analysis of molecular interior. However, the presence of some properties is determined by the inner content as well. Therefore, scientists of South Ural State University ventured further and proposed grid methods of assessing the molecular interior. These methods allow analyzing internal structure of a molecule and its interrelation with biological activity.

“We invented new methods for rational design of medications. These unique methods are based on replacement of anti-pharmacophore atoms of molecules, which are blocking the therapeutic effect, with new atoms. By doing this, we enhance the gain of biological activity. The discovered regularities get put into the program which uses them for further forecasting of new medications. This allows obtaining a more efficient medication,” says the Laboratory head.

Results obtained by South Ural State University’s scientists are described in one of the latest articles entitled “Grid methods of molecular interior assessment”, which has been published in Current Medicinal Chemistry high-ranked journal, included in Scopus scientometric data base (Q2).

Software developed at the SUSU Computer-aided Drug Design Laboratory is presented on the website www.chemosophia.com. It allows determining interrelations between biological activity of a substance and its structural parameters and carrying out design of new medications on the basis of discovered regularities.

“Due to advanced computing devices and some original ideas, the process of analysis goes very quickly. Our team invented unique analytical methods of integration, which has never happened before; we also invented one quantum free-orbital approach. In contrast to traditional quantum methods which can spend days reading one molecule, our approach allows reading even proteins within minutes,” stresses Vladimir Potemkin.

The obtained virtual formula of a substance that might be efficient for curing some disease needs to be synthesized. For that, SUSU scientists are cooperating with the University of Delhi (India). Supervisors of two groups of chemists specializing in synthesis, Dr. Brijesh Rathi and Dr. Puunam also are research fellows of the SUSU Computer-aided Drug Design Laboratory. Positive results have already been obtained. For example, the scientists managed to design antimalarial drugs that have shown high activity in vitro.

Close cooperation is carried out with the Laboratory of Genomic and Postgenomic Research in South Africa, where medications get developed to fight the causes of a disease, not its consequences. Also, joint research of biological activity is carried out with the Helmholtz Centre (Germany). In the future, scientists are planning to simulate a complex of ferments with medications, because methods invented by SUSU scientists allow researching electronic properties of medications’ ferment systems, as opposed to any globally known method.