«This Is a Tribute to Our Veterans»: More Than 200 People Were Dancing around to the Victory Waltz at SUSU 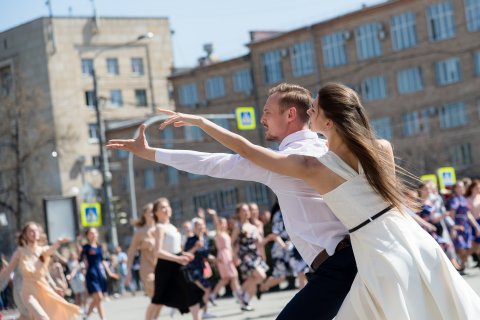 For the fifth time in a row South Ural State University has organized the Victory Waltz. More than 200 people took part in this dance flashmob dedicated to the heroic act of the Soviet soldiers in the Great Patriotic War.

The Victory Waltz is rightfully one of the most big-scale events among the May 9th celebrations. As a token of the imperishable memory and gratefulness for the great courage and self-sacrifice of the Soviet people, young men and women were waltzing around to the sounds of the melody played on the same occasion back in the year of 1945. SUSU Rector Aleksandr Shestakov delivered a greeting speech for the veterans, homefront workers, and the university’s academic and administrative staff, and students.

«My congratulations to you on this great holiday of our country – the Victory Day. We gained this victory at a very hard price: many people, who just finished school and did not even have time to enrol with a university, went off to war. And our Victory Waltz is a tribute to the memory of the young men and women who risked their lives to make our country free again. We are organizing this important event for the fifth time already, and among its participants are students – the future of our city, our region and our country. This is a tribute to our veterans and our younger generation». The Victory Waltz is a university-wide campaign, in which students of all the SUSU schools and institutes, as well as those from other universities take part. The author of the idea and the organizer of this moving flashmob is the chief editor of SUSU-TV television and radio broadcasting company Natalya Tuchkova.

«Today, about 140 dancing couples have performed on the square in front of the SUSU’s main building. It’s good to see that for the second year in a row, among the Victory Waltz participants are the school pupils from Lyceum No.11. The second-graders prepared hand-made souvenirs to present them to the veterans,» notes Natalya Tuchkova. 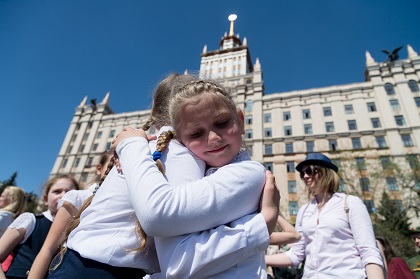 Following the tradition, SUSU prepared a special surprise for the audience. This year, students were joined by elder couples – participants of the city-wide Couples Celebrating Golden Anniversary of Their Marriage project. The campaign was supported by the band of the Federal National Guard Troops Service of the Chelyabinsk Region, which played ceremonial melodies. Another surprise was that the principal performer of the Chelyabinsk State Academic Opera and Ballet Theatre named after M.I. Glinka Inga Karpova was dancing alongside everybody else.

A SUSU alumnus and a professional choreographer Tatiana Muller acts as the long-time production director of the Victory Waltz. She explained this year’s performance idea.

«By our dance we were trying to show the connection between the generations. When the waltz ended, our participants formed into several families, with grandmothers, grandfathers, students, and later children ran up to them. This was a way to stress that a war leaves its trace in all generations of a family, from its youngest to its eldest members, and that every family suffers from the aftermaths».

That day the representatives of the elder generation, students and school pupils were performing to show their gratitude to the veterans and homefront workers of the Great Patriotic War, who were invited to the Waltz as honoured guests. Chairperson of the SUSU Council of Veterans Nadezhda Kuzmina, a Siege of Leningrad survivor, also participated in this event. That was how she explained what this campaign means for them.

«I like this tradition very much: the reverent attitude of young girls to waltzing, and the fact that young men, more used to marching, learn how to dance… How they were running towards each other and were smiling! What is it if not happiness? We often invite the veterans to celebrate big holidays, and it’s very important for them. They are very grateful to participate in events like this and ask ‘We’d be happy to receive invitations even more often’. And we do try to render support to them». 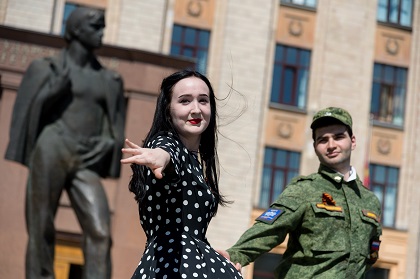 Young men in military uniform and girls in dresses looking just like those their grandmothers had been wearing overwhelmed the whole city with their sincere dancing once again. For these guys this campaign is no ordinary dancing. It is a chance to feel the greatness of the Great Victory anniversary and the importance of the heroic act performed by the veterans so that their children, grandchildren, and great-grandchildren could have a future.

«I’ve participated in the Victory Waltz for the first time. For me it’s a very patriotic and heartwarming campaign, which gives us a chance to say that young people do not forget that the veterans gained this victory for us. We’ve always remembered and will remember about their heroic act,» shared SUSU student Adelina Serebrennikova.

Such local companies as Stolle café and pie-house, and Chelyabinvestbank also made their contribution into the holding of this flashmob. The Victory Waltz organizers expressed their hopes that this campaign, that touches people’s souls, will continue to be held in the future as well, and that it will attract even more young people as its participants.

Dance Flashmob Dedicated to the Victory Day Is Held in Chelyabinsk;

Veterans And Students Waltzing Around;

Like in 1945. Residents of South Ural Region Dancing around in Victory Waltz