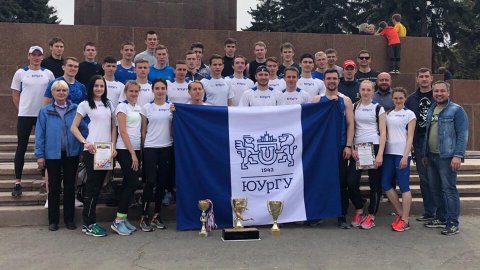 On May 5, the team of athletes from South Ural State University triumphantly performed at the traditional city relay, held on the occasion of the Spring and Labor Day celebration. It was the first time that the relay was held as part of the Universiade of educational institutions of higher education of the Chelyabinsk region. SUSU students earned the highest reward.

The relay was held for the 87th time. On that day, more than 5 000 athletes took to the streets. Head of Chelyabinsk, Vladimir Elistratov, started the competition with a welcoming speech:

“Dear athletes, veterans and future participants of traditional sport competitions! I congratulate you all on the upcoming start of this unique competition, the history of which dates back to 1932, when the first track-and-field relay was held in Chelyabinsk. Later, it got supplemented by a cycle-race and a roller-ski race. Today, this is the most massive sport event of our city! Last year, 1800 athletes took part in the competition. I am sure, this year we are to break this record! From the bottom of my heart, I wish you all good spirits, success and positive emotions!”

The relay featured seven student teams, more than 100 people. 18 of them were students of South Ural State University. University students competed in one race with teams of enterprises, sport clubs, and children’s and youth sport schools. Relay participants had to complete 16 relay legs of various distances: 10 of them men’s and 6 women’s. SUSU students became the winners of the mixed race and were awarded the Bronze Runner, the higher reward of the relay. Moreover, the team of SUSU took the 1st place in men’s race.

“Students of our university have participated in the traditional city relay from the moment of the university establishment. These victories, among everything, are the merit of coaches, Deans and Heads of Departments. They did their best to keep good athletes at the university, to explain them the importance of studying. I would like to wish the winners to keep the bar high, get together in the next year and repeat the success!” stressed Head of the Department of Sports Perfection at the ISTS, Director of SUSU’s Physical Education and Sports Club, Albert Aminov.

The victory of SUSU athletes proves the quality of their training, high level of resources and facilities of the university, and active life position of the university students. We congratulate the team and wish them future success!