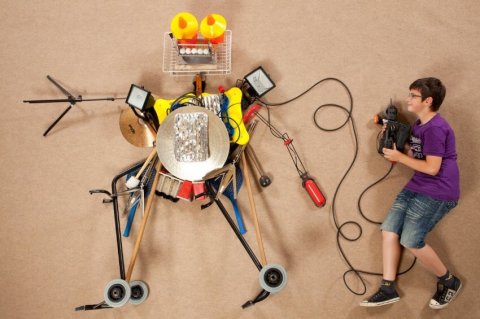 On May 17th-18th, dozens of venues dedicated to modern technologies, science, and technical creativity will open. Residents of our city and region will see the process of creating robots, automobiles, and aircrafts. The Rukami festival includes contests in technical creativity, excursions, master classes, scientific lectures, an exhibition by the engineering groups of the Chelyabinsk Region, and a performance, installations, and photo zones.

The Rukami festival will be held for the first time in Chelyabinsk, and will become the biggest event in technical creativity in the Chelyabinsk Region. The Chelyabinsk festival is part of the Rukami project – a federal, non-commercial project of the Kruzhok Movement under the National Technology Initiative which aims to bring technical creativity, «maker» work, and the creation of projects within their groups to the attention of young people and general public.

On May 17th, the participants of the festival will visit three venues in the city. At South Ural State University, there will be robot battles and excursions at the scientific laboratories. At the Quantorium technopark, scientific battles and a hackathon will be organized, and a children’s technical Stand Up will be held. VR and AR technologies will be demonstrated at the IT Park, and the «IT Technologies of the Future of Russia. A Glance into the Future» press-conference will be held.

On the second day, May 18th, the festival will move to the Yu.A. Gagarin Central Park of Culture and Recreation, where the whole territory will be taken over by technical and innovative projects presented by the major commercial companies of our city and region, state institutions, and young scientists. The main stage of the park will host the awards ceremony for participants of regional contests in technical creativity, cover groups will perform, and the best engineering solutions by young researchers will be demonstrated.

Entry is free. Additional information about the event can be found in the group https://vk.com/rukami74 and on the event’s site http://rukami74.ru/.

Information about the Rukami project

Rukami is a non-commercial project initiated by AO RVK and fulfilled by the NTI Project Support Fund. This project was approved by the Russian Federation Presidential Council on the Modernization of the Economy and Innovative Development of Russia in 2018 as a key project for the fulfilment of the Kruzhok Movement under the National Technology Initiative’s road map. The project aims to bring the attention of young people and a wide audience to technical creativity, «maker» work, and the creation of projects in their own groups.

Rukami includes a number of regional maker events which demonstrate projects of technical creativity, the best of which are presented in Moscow. The key event of this project is the Rukami International Festival, which gathers technical enthusiasts from Russia and abroad, uniting the best practices and formats. The project includes an educational and networking program for the management teams of groups, which allows them to not only attract new audience, but also support it, forming a strong society.

The Kruzhok Movement is a Russian society of enthusiasts of technical creativity build on the principle of horizontal links between people, ideas, and resources, and formed based on the existing road map of the NTI. The goals and opportunities within NTI are integrated into the Science National Project.