Become a Tutor for a SUSU International Student 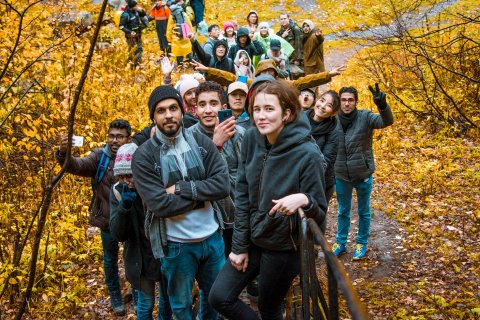 Last year, before the 2018-2019 academic year started, SUSU organized a group of tutors ‒ mentors from among the university students, who were helping foreign citizens during the first days of their adaptation in the environment which was new for them. The task was to meet the international students (groups of students) in the airport or on the railway station, and to provide them with brief guidelines and transfer them to the university campus. Tutors were also helping to solve the issues on staying in Russia and in our university: getting registered with the migration service, executing the insurance, taking the medical examination, getting a room in a dormitory, and receiving information on the location of the academic buildings and the relevant infrastructure.

“Most guys, who come to study at SUSU from abroad, do not speak Russian. It was decided to organize the work of volunteers on helping the foreign citizens with the issues of staying in Chelyabinsk, and in turn that could help the volunteers in practicing their foreign languages with the native speakers and in learning about cultures new for them,” says specialist of the International Student Support Valeria Chachina.

The season of most active work includes the months of August, September and October. This is the time when foreign citizens obtain their visas and come to study at SUSU. After that the tutors, in the course of the academic year, take the initiative and organize excursions and other events for international students to help them in their social and cultural adaptation, unlocking the students’ soft skills and group initiatives aimed at active participation in studies and in the university’s extracurricular activities, thus making students more interested in the SUSU’s internal environment.

“We organize different events for international students in the course of the year. First, we introduce them to the university environment, and during the period of their studies we show our city, our region and our culture to them. There are cases when we accompany foreign students individually, when they need, for instance, to go to a shop or a shopping mall, but are scared to do that on their own. Our tutors offer their help in all such cases,” notes Valeria Chachina.

The project facilitates the creation of a more favourable atmosphere for further fruitful development of the international collaboration through actively involving citizens of other countries into the university life, as well as the achievement by the university of its goals on attracting new students through the interaction with the tutors.

Students from 52 countries from around the world are studying at SUSU, and this figure increases year after year. SUSU students of the 2nd, 3rd, 4th and 5th years of study are invited to join the team of tutors. Knowledge of foreign languages is desirable, and the wish to help people is obligatory!

To join the Tutor of a SUSU International Student team, be sure to fill out the application form (https://forms.gle/M9DwDMRmsJ5H9LS9A) before May 15th.