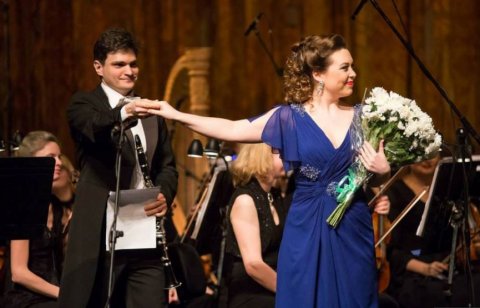 A Triptych for One Actress: Euripides-Shakespeare-Boccaccio (by Nina Mazur)

In all the three stories of this play, Nina Mazur wanted to portray strong female characters that have become archetypes: the tragic and monstrous Medea, the unhappy and pragmatic Lady Capulet, and the lively Giacomina that personifies the Renaissance heroines. The three stories share the same central idea of motherhood. Despite wars, crimes, duels, and plague women remain loyal to their ultimate purpose - become mothers and create life on earth.

The Orchestra (by Jean Anouilh)

A low-grade orchestra in a small French spa town plays timeworn music to a disinterested audience. The central idea of the play is the love triangle between the members of the orchestra - Madame Ortans, Leon and Susanna Delicias. During one of the concerts, the conflict spirals out of control and becomes a public scandal ending in a suicide. The fun of the cabaret turns into a tragic awareness of one’s worthlessness and sorrow for the days gone.

Monserrat Pratdesaba was born in 1963 in Catalonia. Her blues career started in the legendary club “La Cova del Drac” in Barcelona where she was nicknamed “Big Mama”.  Big Mama heads the Barcelona Blues Society and is a member of the Association of Professional Musicians in Catalonia “Musicat”.  In 2013-2016 Monserrat Pratdesaba was one of the twelve members of the European Blues Union. She is the winner of multiple blues music awards and infects everyone she meets with the eternal music of the soul.

Enjoy a breathtaking show of the State Academic Folk Dance Ensemble named after Faizi Gaskarov, the well-known team from the Republic of Bashkortostan. Its recent 80th anniversary has proved the continuing popularity of the dance ensemble and audience’s admiration with their talent. The repertoire of the dance ensemble is extensive and bursts with colours and emotions.

Viva Opera is one of the world’s most famous music festivals well-known in Russia, Europe, South America, and Asia. During its 13 years of existence, the festival has seen the greatest opera stars from all over the world, including the soloists from the Bolshoi, La Scala, the Mariinsky Theatre, the Teatro dell'Opera, and the Vienna State Opera. The concert will consist of two parts and include in its repertoire the essentials of opera classics. Over a hundred musicians, vocalists, soloists, and technicians are engaged in the concert to make your evening an unforgettable experience.