April 12 is a special day for Russia as the country commemorates Yuri Gagarin’s first space flight. For over 50 years, we have felt pride for the triumph of the Soviet space program in putting the first man into space. On April 12, many Russian cities organise a variety of exhibitions, conferences, seminars, and film screenings dedicated to space.

Back in 1961, Gagarin’s space flight united the whole country. Yuri Gagarin became a Soviet icon whose name was used for various patriotic purposes by the authorities. Gagarin inspired a fantasy that enchanted millions of Soviet children - the dream of flying to the Moon and Mars. In commemoration of the 58th anniversary of Gagarin’s flight, we translated one of the first Soviet articles written after that historic event. The article was published in the Pioneer journal in May 1961. The bus stopped. The door opened, and a man in the bright orange space suit and white helmet went outside. Surrounded by the excited crowd of people, he headed towards the launch pad, where a spacecraft was waiting for him.

It seemed the giant rocket, glittering with the letters “Vostok” in the April sun, was quietly gazing at the sky. Compared to her, the people standing nearby looked tiny. That rocket was huge that it took an elevator to get to the top.

The man in the space suit was slowly walking towards the spacecraft.

The technicians were still busy with the final checks of the rocket when, seeing that short guy in the orange suit, they stood motionless. Gagarin was looking serious with his grey-blue eyes; his gaze seemed cold and distant. Maybe it was just an illusion as the unusual clothes and the helmet had entirely transformed the man the technicians knew so well.

– Yeap! the astronaut responded, and his absent look changed into a broad smile, revealing a pretty cheek dimple.

– Have a good landing!

Gagarin laughed. People gathered around him, shaking his firm hand and hugging him.

– Careful or you’ll tear the suit. What will I wear in space then? he smiled and blushed. 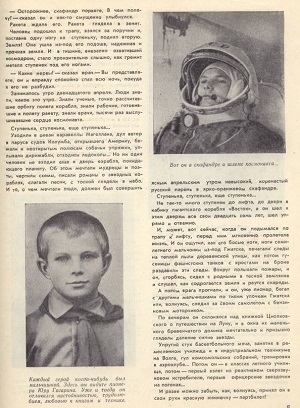 The spacecraft was waiting for him. She was looking up. The man approached the ladder and touched the rails. He went up the first step. Earth! At that moment, he felt like he was torn away from it, away from his sweet and safe home. In the silence that fell, the sound of his footsteps was almost ear-splitting.

– What nerves! the doctor said. Can you imagine he’d been sleeping still until I woke him up?

The world saw Magellan’s ships, the discovery of America, arctic expeditions, the first flight of a dirigible, and the first icebreaker in the polar waters. But the world had never seen a man entering a spacecraft and leaving the planet until that morning. People had dreamed about that moment writing stories and designing grand space projects. The space dream of the whole humanity was to be realised on an April morning by a young Russian guy in the bright orange space suit.

There were not many steps before the elevator, before the door to the cabin of Vostok. But Yuri’s path to that door lasted for all the 27 years of his life. Maybe at that moment, when Yuri was mounting the steps, his life flashed before his eyes. Maybe Yuri remembered his childhood and the feeling of his bare feet against the warm surface of the village street in his native Gzhatsk. Or maybe Yuri remembered how the fascist tanks desecrated his beloved land while he was trembling with fear in a stuffy hut with his family.

And when the enemy was defeated, Yuri, a young pioneer, would run along the quiet streets of Gzhatsk with other boys feeling excited for his small toy plane flying around.

During his childhood, Yuri would often spend his evenings reading Tsiolkovsky’s Moon travel stories and hear the distant stars calling for him.

The basketball team, vocational school, Komsomol, flying club - young Yuri had time for doing anything. Then Yuri got accepted to a flight school where he experienced his first supersonic aircraft flight and earned his first officer shoulder straps. Later Yuri received his first party membership card. 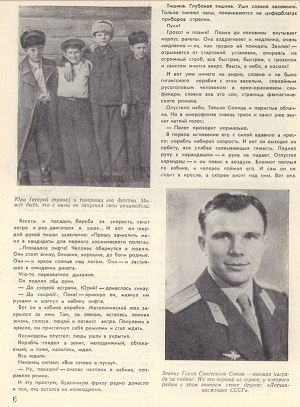 It was not long before Yuri applied for the first space flight in human history.

The elevator! Gagarin turned around to face the people below. Yuri was looking at them, and his heart filled with warmth and love. He turned to the bright sun shining above the forest. And then he glanced at the rocket that was standing still waiting for him.

For a moment, Yuri stopped breathing. He lifted his arms.

– See you soon, Yuri! he heard a man in the crowd shouting.

– See you! Yuri shouted back and waved. Then he stepped inside the elevator.

He soon found himself in the cabin. The metal hatch closed behind him. There, behind the hatch, Yuri left his earth life. Half lying in his chair, he fastened the seatbelts and waited.

The launching site became deserted. Everyone was waiting.

At last, there came a signal: ready to launch.

Everyone heard that phrase through the radio, and then silence fell. One could only hear the loud ticking of the clock. A thunderous noise and blinding flames wrapping around the spacecraft. It seems the rocket shudders at the fire and is reluctant to leave the firm land. In a moment, she soars into the sky moving faster and faster and carrying the first human being up there, to the stars.

The sky became calm and clear. There was no trace of the rocket, no sign of Yuri Gagarin in his bright orange space suit. Was it just a page from a fantasy book?

Through the microphones, there finally came a distant voice.

– The flight is going alright.

As the spacecraft was accelerating, Yuri was forced into the chair. When the rocket entered the orbit, the pressure disappeared. Yuri raised his hand holding a pencil, and the hand did not fall. He left the pencil and saw it float. Yuri felt like he was almost hanging over the chair. Yes, he thought, this is the famous weightlessness described and dreamed about by so many writers, and no one has ever felt it for so long! Yuri caught the pencil and recorded the meter readings. Writing seemed more comfortable in space than on earth.

Through the radio, Yuri heard his favourite songs playing for him.

There was no time to waste.

Yuri saw the Earth through the window, and it was so big and bright and warmed by the sunbeams. He noticed the vast fields, massive forests, mountain ranges, and river threads.

Gagarin took a telegraph key and transmitted a message. Then he switched on the microphone and said, The flight is going alright. I feel good.

The astronaut glanced at the meter readings again and wrote them down. 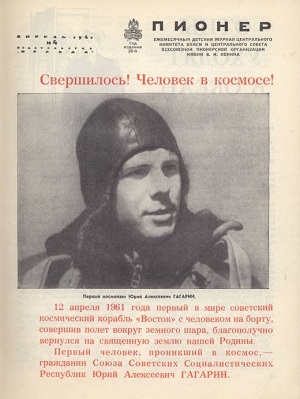 Yuri noticed the gentle shining above the Earth's horizon. And the Sun was so blinding it was painful to look at it.

The earth team asked how Yuri was doing and how the flight was going.

– The flight is going alright, and I feel good too.

Behind the thick window glass, Yuri saw a scattering of islands and then the familiar shape of Africa.

– I am continuing my flight. Everything is working alright. I am going forward.

It seemed the whole planet was listening to his words coming from so far through the radio. How are you doing there, Yuri?

The spacecraft entered the Earth’s shadow. There was no light below. Maybe it was an ocean, a huge black ocean.

Yuri was writing down the meter readings and kept looking through the window when, at last, he orbited his planet.

It was time to go home, and the retropropulsion system was on. The Earth was approaching.

– Earth! Hello, my dear Earth! Yuri realised he was singing. A song was coming out from him involuntarily.

The Earth was closer.

The world saw Magellan’s ships, the discovery of America, arctic expeditions, the first flight of a dirigible, and the first icebreaker in the polar waters. But the world had never seen a man in space, near the Sun and bright stars. Until April 12, 1961.

Moscow. The report to Khrushchev. The Red Square. And lots of congratulations, hugs, and kisses. And even the red tie, presented to Yuri by young pioneers.

His name is known in every country, and everyone recognises his young and smiling face, the face of a brave man.

The stars shine as usual. Every night they look down thoughtfully. As usual, boys and girls from many cities wear their pioneer ties and dream of flying spacecrafts to the Moon and Mars.