Write Correctly! SUSU Will Once Again Become a Venue for the All-Russian Campaign Nationwide Dictation Quiz 2019 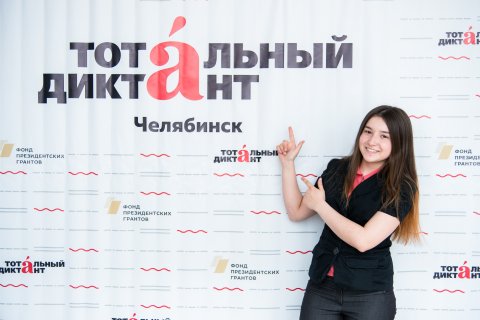 The campaign has been held in Chelyabinsk for 7 years now. In 2018 SUSU became one of the biggest venues of the Nationwide Dictation Quiz campaign in the South Ural region. And in 2017 our city took the third place in Russia and the first place in the Ural region as per the number of foreign participants who passed the test called TRUD (the quiz-based tasks specially adapted for foreigners, as well as an abstract from the dictation quiz).

The text for the 2019 quiz was written by Pavel Basinsky, a Russian author, literary scholar and critic, books reviewer of Rossiyskaya Gazeta newspaper, jury member of the Solzhenitsyn Prize and of the Yasnaya Polyana Literary Award named after Leo Tolstoy. Based on the scenarios by Pavel Basinsky, documentaries about Maxim Gorky, Mikhail Zoshchenko and other writers were shot, as well as a feature film directed by Dunya Smirnova Story of One Appointment (2017), which received the Best Scenario Award at the Kinotavr Film Festival.

For the quiz participants at South Ural State University the text will be read out by lecturers of the SUSU Department of Russian Language and Literature Larisa Vybornova, Larisa Kornilova, and Alena Tezina.

“This campaign is a good opportunity to not just check your literacy skills, but also show that you care about the problems of development of modern Russian language, demonstrate your love of expressive, precise and beautiful Russian words, as well as your interconnectedness with great Russian culture,” says Director of the Institute of Social Sciences and Humanities Elena Ponomareva.

In 2019 the SUSU’s international students will once again have a unique opportunity to pass the quiz in small groups, what makes it more comfortable for them. Moreover, specialists from the Department of Russian as a Foreign Language of the Institute of Linguistics and International Communications work with students since they have a many-years experience in this field. In addition, the interns from the Department of International Relations, Political Science and Regional Studies, who study Chinese and enjoy helping our students from China in learning Russian, will be involved in the preparation to this year’s quiz.

Participation in the Nationwide Dictation Quiz gives every person a chance to check their knowledge of the Russian language and excites interest in literacy improvement. On April 13th thousands of people will be writing the original-text based quiz, and those who will succeed, will be awarded special gifts from the university partners.

You can pass the Nationwide Dictation Quiz at:

The international participants will be taking the test in Sigma educational building, as well as in Rooms 429 and 443 of the Main University Building.

The campaign aims at proving that it may not be easy to study Russian, but it certainly is fascinating and useful, and also at uniting all those who can or wish to speak Russian and write in it. Anyone, regardless of their age, education or citizenship, may take part in the campaign.