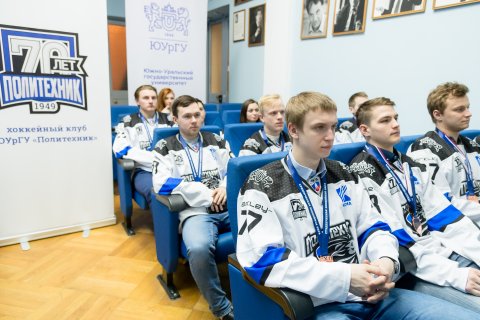 On the International Students’ Day, a match of all-time stars of the Student Hockey League is to be held at South Ural State University. A video conference entitled “Students meeting the outstanding Russian hockey player, coach Vladislav Tretiak” was held at SUSU. The purpose of this event which was held within the project of the Russian Union of Rectors was to popularize sports and promote healthy lifestyle among young people.

When opening the video forum, the President of the Russian Union of Rectors, the Rector of MSU Victor Sadovnichy addressed participants of the meeting with a welcoming speech:

“Today we are being watched in tens of cities by about a million of university students. Thank you for taking part in this video conference! I think back to the World FIFA Championship, when in this very classroom we had a meeting with Semin and Slutsky and discussed upcoming battles on the football field. I saw students cheering. I am very grateful to all who supported the Championship back then. Our country showed that we can receive guests and that we love our friends, love sport and can organise memorable events. Basically speaking, the today’s meeting is continuation of that beautiful story.

I’ve known Vladislav Tretiak and have been his friend for a long time. In the 70s of the last century I didn’t miss a single coverage of hockey matches. You know, back then the whole country had been rooting for our team… That time was a wonderful time for ice hockey, when the great Tarasov out of nowhere recruited players and formed a team with which no one in the world could compare. Back then we were students, postgraduates, young researchers… We used to postpone all our businesses just to see the coverage of matches where Tretiak was playing, where our team was playing. The athletes were fighting fiercely! The song of Pakhmutova entitled ‘A coward doesn’t play hockey’ is very truthful. It reflected the spirit of the Great Five. Tretiak was standing between the goalposts in this fierce fight, sometimes event intolerably fierce, when an avalanche of players who are ready for everything to notch a goal is speeding towards you. Everything is a blur, when suddenly Tretiak is extending his hand showing the puck in his glove… He is an impervious goalkeeper! Of course, this is due to his character, but the most important are talent and hard work.

Our meetings with such people are extremely important both for the unity of studentship and for the country in general. You will need to maintain this spirit not only in sports but also in science, in technology, in business, in economics and in other spheres. We are great! We can do our job well and be the leaders!”

Possessor of 76 gold medals (the accomplishment has been recorded in the Book of Records), World champion, the best athlete and the best goalkeeper of the world… Titles of the legendary Vladislav Tretiak can be recited endlessly! But in real life he is an ordinary and a very interesting and communicative person. Vladislav Tretiak told students about coming to high-performance sport, about his defeats and victories, about the team spirits and competitors, about contribution of coaches and the price of success.

“Speaking in front of you today is a big honour for me because you are our present and our future. The way our country is going to go on depends on you precisely. The most important thing is to gather up experience and hang upon the knowledge that your teachers give you, just like we hung on words of the great Tarasov. Many things depend on the leader.

I got lucky to play in the best team. The undefeatable Red Machine! But in order to become undefeatable, one needs to overcome difficult challenges in life. I was raised in a family of a military man. My Dad was an air force officer, he didn’t like hockey. Everybody in the country did but my father… He wanted me to follow his steps. And my Mom played Russian hockey, taught physical education at school and wanted me to become a hockey player. It happened so that I had met expectations of both my father and my mother: I started playing for the CSKA team and have risen to the rank of a colonel. My father was strict, and discipline in my childhood was tough. Though it had its perks: in 21 years I haven’t missed a single training session! I had neither holidays nor Birthday parties in my life. Only training camps and sharpening of skills.

…Don’t take a grudge when your teachers or your coaches criticize you. You should thank them for that. They only want you to be the best. They give their hearts to you. I would really like student hockey to develop in our country. This is very important! I hope this meeting is not our last one. I would like to wish you health, happiness, good luck and achievement of your goals! The truth is, this does not always happen right away. But after a while you will certainly get a chance to become the best of the best.”

During the video conference, the Rector of SUSU Aleskandr Shestakov addressed Vladislav Tretiak with an interesting offer, and his initiative had been supported:

“Today, our meeting is featuring the Polytechnic ice hockey team which celebrates its 70th anniversary this year. In this season, we took the bronze of the Student Hockey League. I would like to ask the great Vladislav Tretiak say a few parting words to our young athletes. Hockey for Chelyabinsk residents is an important sport… And we have an offer. On January 25, all higher education institutions and all students celebrate the International Students’ Day. What if we organise a match between the leaders of hockey and the Chelyabinsk student team on this day in Chelyabinsk?..”

“I played in the youth team against your team in Chelyabinsk. Chelyabinsk gave us Makarovs and many other hockey players who brought honour to our country. It is only due to strict discipline (without expulsions) and precise fulfillment of the goal set by the coach one can achieve a success. I wish Chelyabinsk’s athletes good luck. Thank you very much for loving hockey! I accept your offer. Do invite us. Let us organise such a match,” answered Vladislav Tretiak.

“Today we awarded our heroes, the players of the Polytechnic. They become bronze medalists of the region and received a set of bronze medals of all-Russian scale event, the Student Hockey League. During the video meeting of Vladislav Tretiak with young athletes of the country, the legendary goalkeeper supported our initiative. On the International Students’ Day, we are going to play in a match of all-time-stars of the Student Hockey League. This will allow our university popularizing hockey in particular and sports in general.

SUSU supports about 30 sports; we hold the university’s Spartakiad and multiple competitions. Our university has a very good sports complex. The university invests funds so that students could use all these facilities. We have many students who exercise various sports at a serious level. It might be that not everyone should aspire to be champions, but physical exercises are very important for oneself (this forms one’s strong will) and for being healthy. Good health helps studying. All of this is necessary so that young people could achieve success in life.” 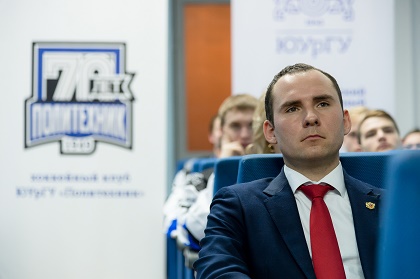 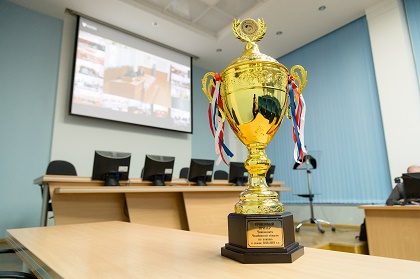