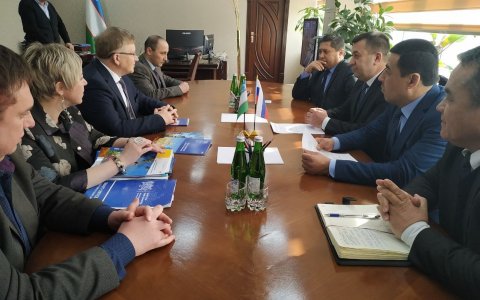 February 26 through March 2, delegation from South Ural State University made an official visit to Uzbekistan. Previously, by the results of the Russian-Uzbek Educational Forum entitled “New Employees for the New Economy” which was held in Tashkent on October 18 and 19 of 2018 and featured Presidents of both Russia and Uzbekistan, a final resolution has been published. This resolution states the necessity to establish branch institutions of Russian higher education institutions in the Republic of Uzbekistan. Presently, SUSU is actively working on establishing connections with higher education institutions of Uzbekistan. Details of cooperation get elaborated, curricula get coordinated, students and interns get invited.

In particular, it is planned to perform cooperation with Andijan Machine Building Institute in such majors as Life Safety, Ecology and Chemical Technology, Pyrometallurgical Processes, Information Technology in Economics, and Developmental Psychology and Age-Related Counseling.

Departments of the institutes are already coordinating joint curricula and signing agreements on invitation of students and interns. It is also planned to organise internships for lecturers as well as student exchange, vocational enhancement courses, and reading lectures on a number of subjects using distance-learning technologies of the SUSU Institute of Open and Distance Education.

Yulia Rudneva; photos from personal collection of the interviewees