SUSU Invites Everyone to Nowruz Celebration 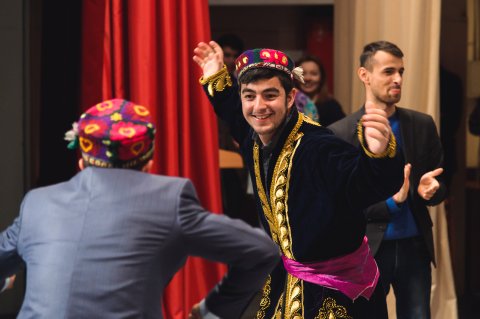 On March 21st a celebration of Nowruz will be held at South Ural State University. The attendees will learn about the traditions of the Turkic peoples and will see the performances by SUSU international students in national garments.

Nowruz is the most important holiday of the year for many nations in Asia celebrating the coming of spring and of the New Year under solar calendar. It coincides with the vernal equinox, which falls on March 20th-21st every year, and symbolizes the beginning of new life and nature rejuvenation.

SUSU celebrates Nowruz every year. The SUSU International Office and South Ural Association of International Students act as the organisers. The event aims at creating an atmosphere of unity of the peoples of Russia and other countries, making the attendees familiar with their traditions and culture, as well as forming a space for maintaining the intercultural communications.

This year’s event will be held on the university stage in the Activity Hall. The attendees will hear speeches by SUSU Rector Aleksandr Shestakov and by the representatives of different expat communities and public organisations located in Chelyabinsk and the Chelyabinsk Region. Chairperson of the Kyrgyz National and Cultural Autonomy Mekendeşter Zyina Bakirova, and Chairman of the Tajik National and Cultural Centre Somoniyon Islomudin Radzhabov and other officials are invited to the celebration. Also the representatives of the Youth Assembly of South Urals will be among the event’s guests of honour.

After a short official part SUSU students from Kazakhstan, Tajikistan, Uzbekistan, Kyrgyzstan and Turkmenistan will perform. They will sing traditional songs and perform traditional dances in national costumes. At the same time, in the hall on the second floor of the main university building an exhibition of folk arts and crafts will be open, where books, household items and other objects representing the culture of the Turkic peoples will be displayed.

Not only SUSU students, academics and staff members are welcome to the university Nowruz celebration, but all those willing as well (you will only have to produce your ID).

The festivities will start in the Activity Hall of the main SUSU building (76 Lenin Prospect) at 15:00. The exhibition will opens at 14:00 (hall on the 2nd floor of the main university building).