Virtual IT Maslenitsa Finished at SUSU 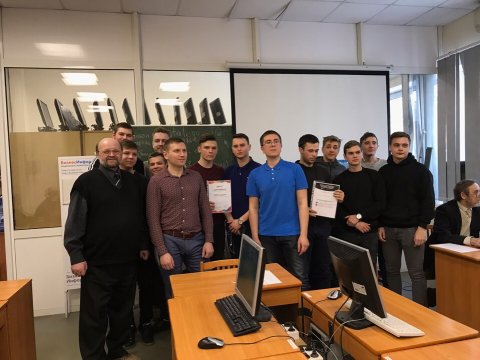 On Thursday, March 7 of 2019, a traditional “capture of the winter town” took place within the first-in-Russia IT Maslenitsa, organised by students of the School Economics and Management. Meanwhile, the School of Electrical Engineering and Computer Science held the PUBG Mobile Tournament, a multi-user online game in the style of a royal battle.

The game featured five teams. After a short battle, the winners got valuable prizes. Participants of the competition were students of HSEM and teams from SUSU’s Institute of Engineering and Technology.

The project was sponsored by Intec Web Company, with which the Department of Information Technology in Economics has been cooperating for more than 8 years.

1st prize was awarded to a united team of group EU-219 headed by Nikita Sidorenko. The prize was 2-year free hosting of websites of the group’s students on servers of the Intec web Company.

Members of the teams that took the 2nd and the 3rd places were each awarded certificates for a site for one year from the Intec web Company.

IT Maslenitsa finished with traditional pancakes for all participants.