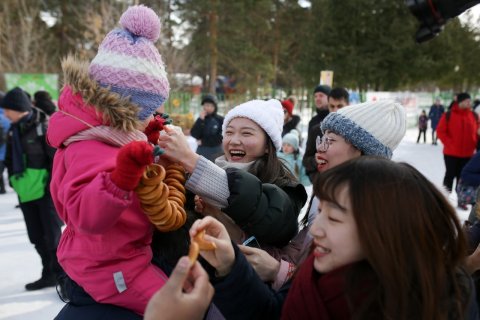 What is Maslenitsa, and what traditions it includes? International students of the Department of Russian as a Foreign Language of the Faculty of Pre-University Education have learned all the specifics of celebrating the week of bidding farewell to winter.

The intercultural exchange and language immersion are the key to successful foreign language training. The Department of Russian as a Foreign Language jointly with the Sociocultural Adaptation Centre have organised Maslenitsa festivities. During the whole week international students and attendees were getting familiar with the traditions of the celebration: were learning to make pancakes, playing Russian folk games, and doing circle dancing.

“Language learning is impossible without cultural immersion. It’s fascinating and unites attendees and students from different countries. Through games and competitions students communicate and learn to understand each other. It’s important not only to know the right word but also understand the image behind it. Now our international students know exactly how to celebrate Maslenitsa, what one needs to do with a jumping rope and a lacing cord, and what pancakes taste like. Many people tried making pancakes themselves and decided that those were most delicious of all,” says Head of the Department of Russian as a Foreign Language Elena Kharchenko. On Monday the international students learned about Maslenitsa. The volunteers of the Sociocultural Adaptation Centre dressed in bright costumes greeted the students and charged them with positive vibes for the whole Maslenitsa week.

Tuesday started with a traditional ceremony called Zaigrysh (Start of Merriment). The attendees of the courses on pre-university education played different Russian folk games: tried rope jumping and fortune telling, as well as did circle dancing and took pictures with Maslenitsa effigy.

“Russians are already tired of winter, they need the sun. They invite everyone and tell about Maslenitsa. They are used to wearing dresses of red colour, the colour of the sun. So we celebrated Maslenitsa together with them. We were singing, dancing and making pancakes,” says an attendee from Sri Lanka Sanjana Probod. “The final day of the week is the most important during Maslenitsa, because on this day people say ‘Forgive me’ to each other. This is amazing! I think that this is the time when everyone can change his/her life for better. I like Russia very much!”

Wednesday, known as Lakomka (Sweet-tooth), was the most delicious day. A teacher from the Department of Russian as a Foreign Language Irina Kislova held a master class on making pancakes. The attendees not only got to taste pancakes, but also learned how to cook them. For some students it was a first time that they tasted a raspberry jam or condensed milk.

“Maslenitsa is an old Russian tradition of bidding farewell to winter! Usually this a merry and tasty celebration held during one week. Everyone treats each other to pancakes. We also celebrated this festival together with our teachers and other attendees. We cooked pancakes, it is a very simple, unusual and tasty Russian dish. I enjoyed this festival very much. I respect Russian culture and this holiday,” shares an attendee from Bangladesh Sharif M.D. Shariful Islam.

“Maslenitsa is one of the most popular holidays in Russia. Every March, when spring comes, people celebrate Maslenitsa. The festivities last for one week. Pancakes are the symbol of this holiday. A pancake looks like the sun ‒ it’s of round shape and yellow colour. The staff of the Sociocultural Adaptation Centre invited us to taste home-made pancakes and taught us how to cook them. It was very interesting,” says an attendee from Egypt Hagag Mustafa. 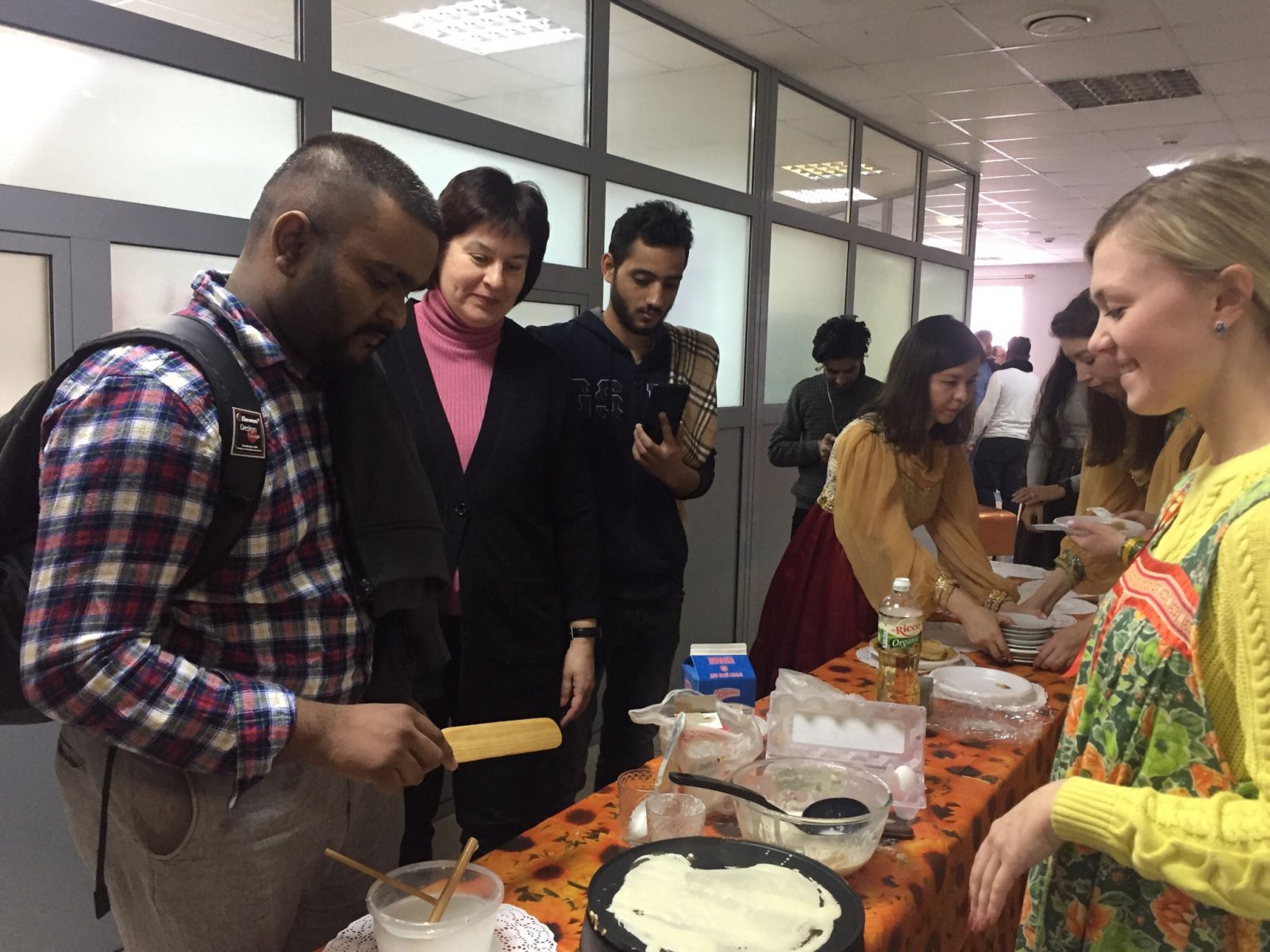 On Thursday the Sociocultural Adaptation Centre organised a master class on making dolls. Among the participants were groups of students and attendees from the People’s Republic of China.

“Many interesting events were planned as part of the Maslenitsa celebrations. During the whole week, March 4th through March 7th, we were holding different events jointly with the Department of Russian as a Foreign Language. We made pancakes, played games and bid farewell to winter. Students learned about the traditions of celebrating Maslenitsa. One of the events was a master class on making Maslenitsa talisman dolls. The attendees enjoyed it very much, so we decided to organise this master class once again,” shares Head of the Sociocultural Adaptation Centre Dina Valeeva.

On Saturday the international students plunged into an unforgettable atmosphere of outdoor festivities in the Recreation and Entertainment park named after Yu.A. Gagarin, they tested their strength and agility in funny contests, and witnessed the ceremony of burning the winter effigy.

This holiday became a cultural discovery for many of the international students. They excitedly posted photos in social media and shared their impressions on everything with their families and friends. 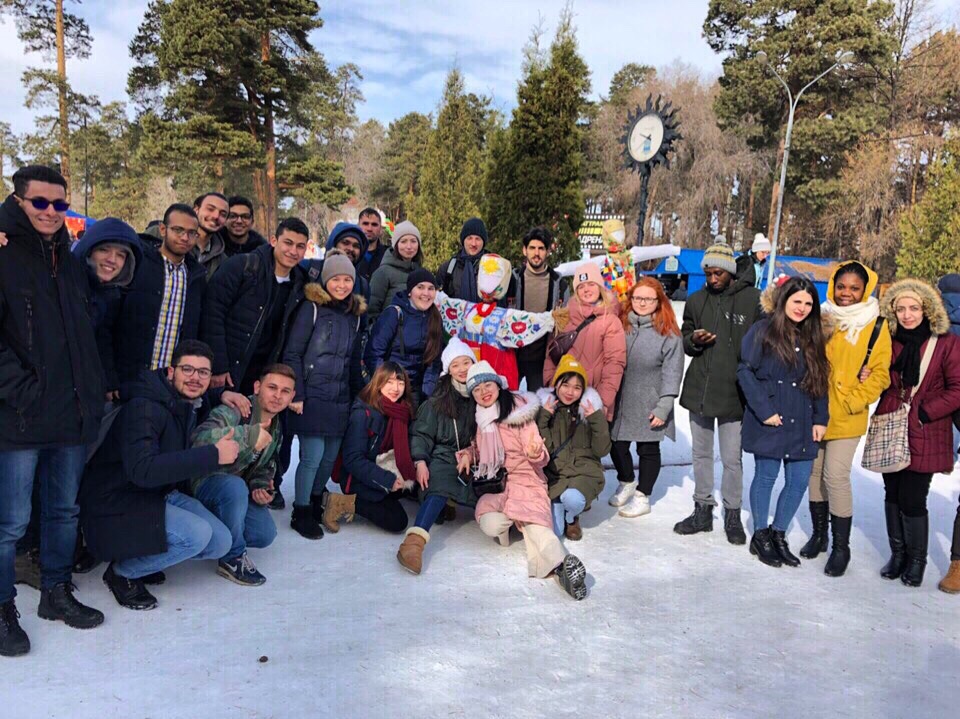 Marina Kovyazina; photo: archive of the Department of Russian as a Foreign Language