A week of festivities, gluttony, and all things pancakes – welcome to Russian Maslenitsa. Otherwise known as Pancake Week, Maslenitsa is a time when Russians make lots of blini or pancakes and burn effigies that represent winter. This year Maslenitsa takes place all across Russia on March 4-10. 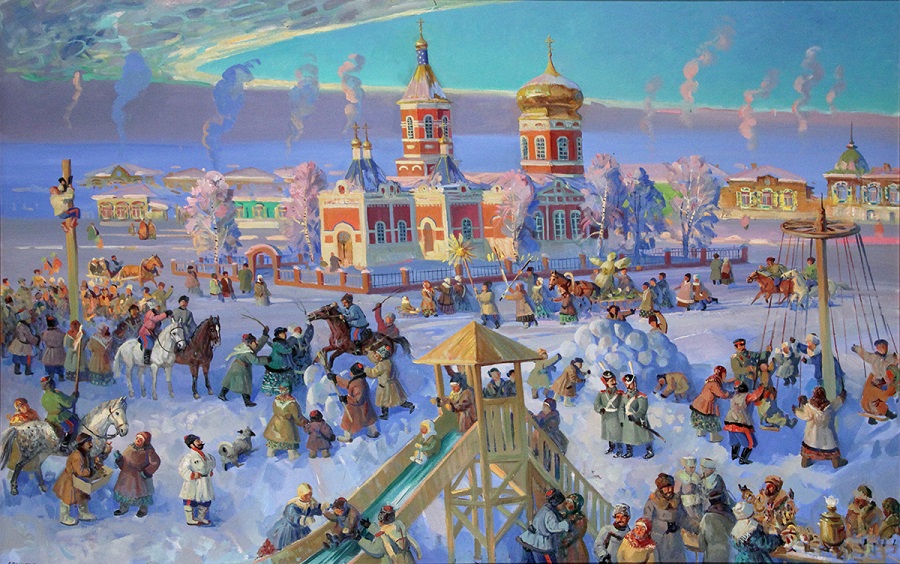 Maslenitsa has a very long history. This ancient Slavic week-long festival combines pagan and Christian traditions and is held every year to celebrate the end of winter and the coming of spring. Initially, pagans used to celebrate Maslenitsa on the spring equinox and enjoy the awakening of spring and the sun’s warmth. Blini or pancakes, the iconic treat of the celebration, symbolised Yarilo, a god of the sun, with their round shapes, golden colour, and warmth.

Later, Maslenitsa became the week that preceded Lent, and it was the last chance to gorge oneself on food before Easter (Lent is a strict fasting period when all animal-related foods and fish are prohibited). On the religious side, Maslenitsa week is preceded by omnivorous week, when people eat whatever they want, and then mottled week, when days of fasting alternate with days of meat-eating. During Maslenitsa, eating meat was prohibited, but, to compensate, dairy products were allowed to consume, which made pancakes a perfect meal option. Today the celebration period of Maslenitsa varies depending on the start date of Lent. 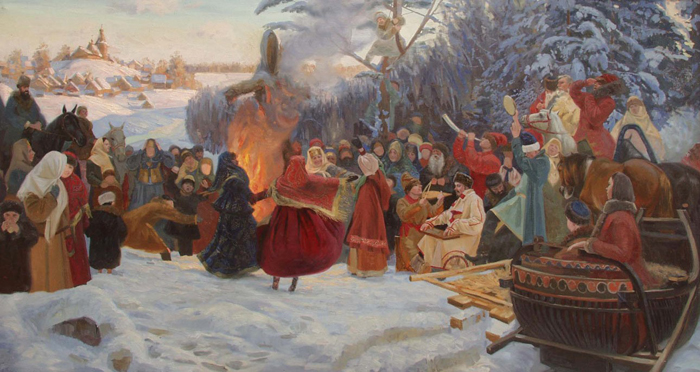 The main rule on Maslenitsa was to have as much fun as possible. It was believed that being gloomy and sad during that period would result in that person getting old in loneliness and misery. Traditionally, each Maslenitsa day had its name and meaning. Monday was called Welcoming. On this day, people would start making a lot of pancakes. The tradition required giving away the first pancake to beggars to pay tribute to the deceased. It was also common to make a Maslenitsa doll that represented winter and set it at the top of a hill where it would be later burned to bid farewell to the cold season.

Tuesday was known as Playing Day. People would go outside and organise various competitions, performances, and games. Young men would ask unmarried girls for a sleigh ride and look for a bride. Nobody would get married during Maslenitsa, but all marriages were planned for a Sunday after Easter. Wednesday was called Sweet Tooth Day. There was an abundance of pancakes and beer everywhere. On village streets, people would start piling their market and fair stalls with treats and delicacies. One of the most popular street drinks was hot tea from a samovar. Wednesday was also a day when a son-in-law would come to his wife’s family house, and her mother would treat him to her pancakes.

Thursday was the day of Revelry. People would stop working and dedicate the rest of the week to nothing but fun. Starting Thursday, men would engage in fist fighting (there were strict rules, of course, and the cheaters were severely punished, and one-on-one or wall-on-wall fights were only allowed). Despite its name, fist fighting was not a serious competition but a way to have fun, and men would even wear festive clothes. On this day, children, dressed for Maslenitsa, would walk from house to house and sing carols to get treats. 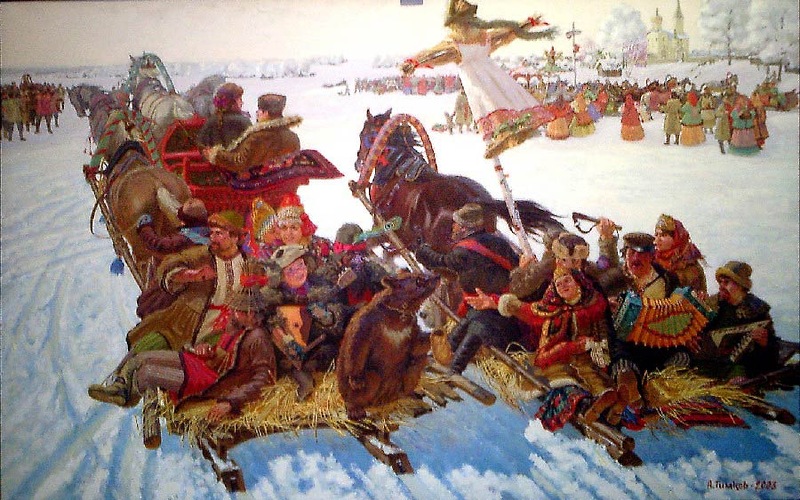 Friday was known as Mother-in-Law’s Eve. Friday was a reciprocal day when sons-in-law would invite their mothers-in-law for pancakes. On Friday’s eve, mothers-in-law, in turn, had to send a pancake-making kit to their sons-in-law, including a frying pan and a ladle, while fathers-in-law would send a sack of buckwheat flour and butter. On Friday, newlyweds would wear the best clothes and ride lavishly decorated sleighs along the streets. Traditionally, on Friday they had to visit every person who had been a guest on their wedding.

Sunday or Forgiveness Day completed Maslenitsa week. People would say sorry and ask for forgiveness of those who had been hurt by them one way or another. When villagers met in the street on Sunday, they would kiss each other, and one of them said, “Please, forgive me”, while the other would reply, “God will forgive you”, and all the disputes or arguments were thought to be resolved. On Forgiveness Day, people would attend cemeteries and say sorry to their deceased relatives, leaving pancakes for them. Last Maslenitsa day was also notable for the winter farewell ritual. All the village would get together, and people would make a huge fire. They would then burn a straw-stuffed Maslenitsa doll representing winter and threw pancakes into the fire as a sacrifice for the future soil fertility. It was time to thank winter for everything good that it had given, and welcome the long-awaited spring. How to Make Russian Blini

There is nothing like a plate of freshly made traditional Russian blini, hot and so filling! With blini, there really is no limit to what you fill or serve them with. The key is to make the perfect batter; that way even plain blini will be impossible to resist. Heat the milk so that it is warm but not boiling. Beat together the eggs, sugar, and salt in a bowl. Stir well. Add the vegetable oil and stir well again. Add ⅓ of the milk and stir lightly. Blend in the flour and stir constantly. The batter must not have any lumps in it. Add the left milk. Add the baking soda and stir quickly; this step will make your blini porous. You know you have the perfect batter when it is liquid, almost watery, and not lumpy. Let your batter rest for 20-30 minutes to make your future blini more elastic.

Preheat your frying pan (medium-high heat) and grease the pan with a small amount of vegetable oil before adding the batter. The pan should be big enough (at least 20 cm in diameter). You will need to grease your pan (thin layer of oil!) before frying every blin. This step is necessary to easily flip blini and transfer them to a plate.

Pick the pan up and carefully pour in a ladleful of batter while tilting the pan so that the batter spreads across the bottom and and coats it. The layer should be very thin! You know your blini are ready when they are golden and rusty from both sides (cooked blini also have brown spots on their surface). It usually takes no more than 1,5-2 minutes to cook the first side of a blin. After 1,5 minutes, carefully lift up the edge of the blin to see if it is cooked well. When one side is ready, flip the blin over and cook the other side for about 1 minute.

Put the ready blin on a plate (it might be useful to line each blin with a clean kitchen towel to let it absorb the extra grease). Stack blini on top of each other. To keep them warm, cover them with a kitchen towel.

Your blini are ready to serve. Blini are best served with sour cream, honey, condensed milk, or fruit preserves. If you want something extravagant, serve blini with red caviar. Another serving option is to spread your favourite filling (mushrooms, cottage cheese, cooked minced meat, fruit, cheese and ham, cooked liver, etc.) in the centre of each blin and fold it three times to make a triangle, or you can wrap it like a burrito.

Enjoy your blini and have a great Maslenitsa!