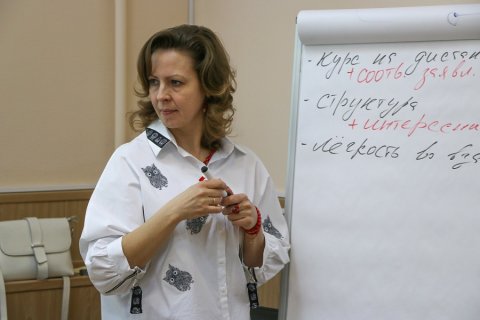 Within preparation to the 2nd Festival of Electronic Learning called “Interactive Universe”, SUSU’s Institute of Open and Distance Education acted as an organizer of a master class for academics of the university entitled “Blue Ocean in Distance Learning”.

The event was held in the form of a training-and-moderation and was conducted by Yulia Babanova, Doctor of Sciences (Economics), Director of the SUSU Centre of Business Development Technology, Professor at the Department of Industrial Economics and Project Management. The lecture holder talked about the Blue Ocean Strategy developed by W. Chan Kim and Renée Mauborgne and about its main principles (concentration of attention on the general image instead of numbers; stepping beyond the limits of the existing demand, etc.). Participants of the meeting learned that the metaphor “red oceans” is used for identifying reality in which various institutions operate, whereas “blue oceans” mean unlimited possibilities which can be created by these organisations.

Under the business coach’s guidance, academics determined what attracts attendees of study courses and what elements leave them indifferent. In the course of interaction, participants convinced themselves that the Blue Ocean Strategy, for implementation of which ine should concentrate on the new, is relevant not only for the business sphere, but can also be successfully applied in the system of distance learning.

On February 27 (Wednesday) at 14:00, a master class entitled “Inclusive Communication” is going to be held by Yulia Shumova, Associate Professor at the Department of Contemporary Educational Technologies of the SUSU Institute of Open and Distance Education, Head of the Centre of Introduction and Development of Inclusive Technologies Autonomous Non-profit Organisation.

You can learn more about other event held within the Festival on the New Educational Technologies website.