A Student of SUSU has been Awarded the Anatoly Sobchak Scholarship 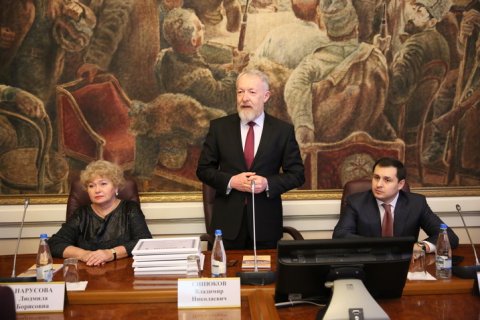 On February 16, a ceremony of awarding the Anatoly Sobchak Scholarship was held at MSAL. Among those who have been awarded was a student of South Ural State University.

While opening the event, Vladimir Sinyukov noted that applicants for the Anatoly Sobchak Scholarship are the elite and foundation of the future of our country, and he thanked all contestants for their strive for knowledge, dedication to the science of law and aspiration to make the world around them better.

Liudmila Narusova also greeted students and noted that awarding of scholarship applicants at MSAL is very significant as Oleg Kutafin and Anatoly Sobchak were not just like-minded people and colleagues but also close friends. Besides, Liudmila Narusova noted that Anatoly Sobchak had always supported initiatives of his associates among young people:

“In his activity, Anatoly Sobchak had always relied on young people, on former students and postgraduates. On the people who could think for their own, who had no obligations for the existing system. He thought that the ones who had to work for the future well-being were those who were going to live in that future,” concluded Liudmila Narusova.

After welcoming speeches, the awarding ceremony took place. This year, holders of the Scholarship are:

In the course of the ceremony, screening of a documentary by Ksenia Sobchak, “The Sobchak’s Case”, took place.

The Anatoly Sobchak Scholarship is annually awarded to full-time students majoring in Jurisprudence who has high academic achievements and take active part in research activity.