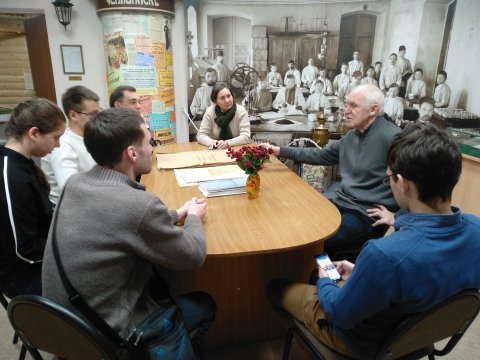 On January 31, 2019 first-year Master’s students of the project-based learning programme, as well as Bachelor’s students of the Department of Russian and International History of the Institute of Social Sciences and Humanities attended an exhibition on the Objects of Cultural Heritage of South Ural held at the Unified State Archive of the Chelyabinsk Region.

The meeting was organized by Deputy Director of the Archive Nikolay Antipin, being one of the supervisors of the project on Interactive Electronic Application on the Historical Reconstruction of the City of Chelyabinsk, which the students are working on. The excursion was hosted by a prominent Chelyabinsk local history expert Yurii Latyshev, who gave a detailed report on the existing and lost objects of cultural heritage of the Chelyabinsk Region, as well as answered all the questions of the history students.

The agenda of the discussion was the issue on the ways and possibilities of preserving the cultural heritage sites, and on the possibility of their historical reconstruction, including in different “virtual” forms. The talk with Yurii Latyshev resulted in reaching an agreement on further collaboration of the Department with this local history expert, what is important for the development of the project.