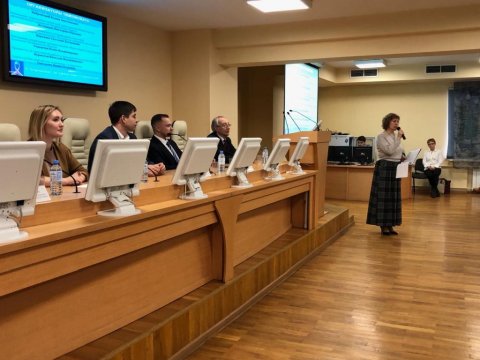 Chairman of the Organisation Committee is Evgeny Redin, First Deputy Governor fothe Chelyabinsk region; Vice-Chairmen are Aleksandr Kuznetsov, the Minister of Education and Science, and Aleksandr Shestakov, the Rector of FSAEI HE “SUSU (NRU)”.

Deputy Minister of Education and Science of the Chelyabinsk region, Vadim Bobrovsky, Head of Project Activity Administration of the Ministry of Economic Development of the Chelyabinsk region, Ekaterina Istomina, SUSU’s Vice-Rector for Student Affairs, Vyacheslav Burmatov, and Deputy Director of SUSU SEM, Natalya Pravdina addressed participants of the Championship with a welcoming speech. All of them noted the importance and relevance of the event for the region as a whole and for each participant of the Championship in particular.

Supervisor of the Championship, Professor at the Department of Industrial Economics and Project Management, Leonid Baev cited requirements for the concept of a project and talked about participation in the offsite competitive-training stage. At this stage, participants with their supervisors/school teachers will be given knowledge on managing projects of social and economic development, which in the future will allow improving the presented concepts till the state of a project, prepare them for defending on the third stage of the Championship, and get further implemented.

Presentations of projects that have been elaborated by former participants of the Championship, who are presently students at the SUSU Department of Industrial Economics and Project Management, were demonstrated as well. The projects have already been acknowledged at All-Russian and International levels.

Only 20 teams will make it to the final. The selected teams will continue competing for the main prizes of the Championship at the offsite stage.