South Ural State University facilitates the adaptation of its international students to the conditions which are new for them. Big part in this process is played by engaging them into extracurricular activities, sports and recreation. Many students who come from abroad take the opportunity to master winter sports in the cold season.

Last December SUSU students from foreign countries tried snowboarding and skiing for the first time ever. The SUSU International Office and Association of International Students jointly with Katalitsa project organised a trip to Sunny Valley mountain ski resort, near Miass, for students from the People’s Republic of China.

“We organised a trip to the mountain ski resort for about 100 students from China. For many of them it was the first experience in winter sports, like skiing and snowboarding. Skilful instructors helped them all. Students were charged with positive emotions, it was an interesting and funny event for them. This year we will definitely organise a similar trip,” notes inspector of the International Student Support of the International Office Valeria Chachina. 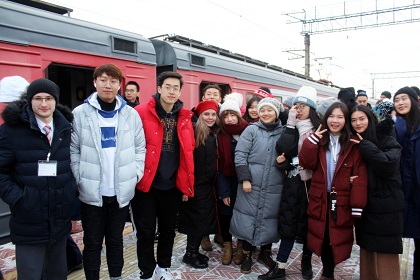 Some of the SUSU students from Argentina, Columbia and other countries expressed a wish to experience another Russian tradition – ice-water dipping. Their idea received support from their tutors –students of our university who act as mentors and help foreigners at the stage of adaptation. The tutors organised a trip to the cold plunge pools on lake Smolino.

“Our group of students that day included people from Nepal and Argentina. Before the ice-water dipping we visited the church to look at how a sermon is held. Such experience is very interesting for international students – many of them haven’t even seen snow before their coming to study at SUSU, and here they got a chance to learn about and partake in Russian traditions, and bath in ice-cold water. Foreigners show great interest in our culture, it is to learn more about it that they come to study to our country. When we’re telling students about our culture, we get to know more about ourselves and about our history. The things we think of as routine, seem very unusual for foreigners, it’s a whole new world for them. So, I think it’s very important to welcome them properly and show them our culture and our way of life,” shares SUSU tutor Andrey Melnikov. Among the foreigners who also supported the idea was a Master’s student of the SUSU Institute of Architecture and Construction Angela Rojas Celis. The student shares her impressions:

“I decided to join this tradition, because for me it’s important to know how people in Russia think, what their culture is like, and the best way to understand it is to live it through. I think that the experience that I’ve lived through is unique: at first you feel scared, you think you won’t be able to fight off the cold, but once you plunge in the water this feeling vanishes away. I’d like to do it once again, because it felt really nice for me. This is a chance to feel so many emotions at once in such a short time.”

Also this winter SUSU international students went bumper tubing. For the third year in a row the SUSU Sociocultural Adaptation Centre organises open air trips to Lazurny settlement. This winter among the event’s participants were about 45 students from China, Sri Lanka, Laos, Venezuela, Italy, Egypt, and other countries. One more trip is planned for the nearest future.

On January 29th the International Office will organise a visit to a waterworld park in Yekaterinburg. Also, on February 6th it is planned to take international students to hot springs. Last year more than 40 people participated in this event. 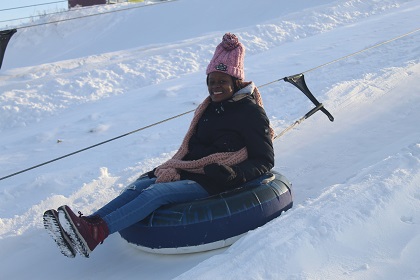 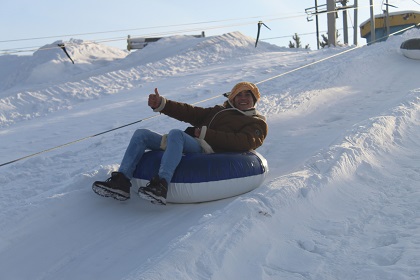