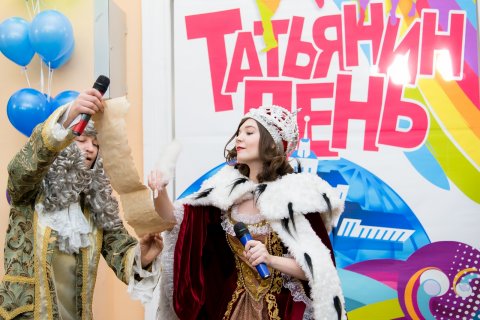 On December 25th the annual celebration of Tatiana Day will be held at South Ural State University. Students and academics of the university will take part in a games programme.

The name of the holiday “Tatiana Day” originates from the name of Saint Tatiana of Rome. By the way, the very ancient name “Tatiana” translates from Greek as “facilitator”. Saint Tatiana is considered to be patron saint of students. On January 25th of 1755 Elizaveta Petrovna, Empress of Russia, approved the petition by Ivan Shuvalov and signed a Decree on opening of the Moscow University, which became one of the centres of advanced Russian culture and social thinking.

Today students enjoy celebrating this holiday. On January 25th of 2005 a Decree was issued by the President of Russia “On Russian Students’ Day”, and the holiday of Russian students became officially established.

January 25, 2019 at 12.00, to celebrate Students’ Day, a games programme with the elements of theatrical performance will be held in the hall of the 2nd floor of the SUSU main building. The audience will learn about the most famous characters with the name Tatiana, readers’ favourite protagonists from the great classical literature: Tatiana from A.S. Pushkin’s Eugene Onegin, Tanyusha from P.P. Bazhov’s The Malachite Box, and Tanya from the poem by Sergei Yesenin. Based on these literary works, an intellectual battle will be held for academics and students, which has already become a tradition.

On the occasion of Tatiana Day SUSU Rector Aleksandr Shestakov grants three wishes of students. We hasten to inform you that the suggestions will traditionally be accepted till January 20th. Any SUSU student can tell the Rector about his/her dream on the university web-site in the Ask a Question section, as well as on the official I Love SUSU web-page in VKontakte social network. The main condition is that these favours are about the suggestions on improving the academic process, organisation of the university events, improving the accommodation conditions in the Campus, and expanding the extracurricular activities of students.

All the letters will be read by the expert committee headed by the Rector, and they will choose the most topical and important favours. On January 25th Aleksandr Shestakov will announce which three wishes of students will be granted.

The teams of the SUSU Recreation Centre will perform at the event, which will wrap up with a festive Russian party with games, amusements, and a student flashmob held to a live singing of Kaby Ne Bylo Zimy… song (by the SUSU pop song group).

All those willing to participate are more than welcome! And directors of institutes who will take part in the battle need to bring along their academic gowns and good mood!

Venue of celebration: Hall of the 2nd floor of the Main University Building.