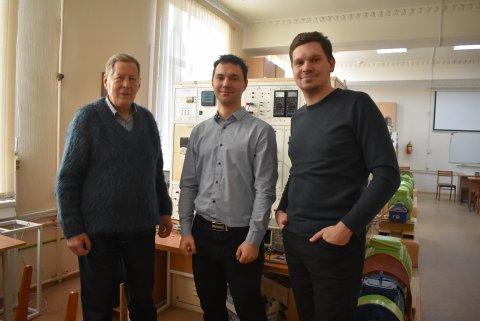 Differential electric drives with synchronous outside-excitation jet engines is a relatively new field of research, which formed at SUSU in the 1980s. Earlier, a significant role in the development of the Ural scientific school of electric drive was played by the Department of Electric Drive and Automation of Industrial Installations of Chelyabinsk Polytechnic Institute (now SUSU).

In 1952 the Faculty of Energy and Power Engineering of Chelyabinsk Polytechnic Institute opened a Department of the Industrial Sector Electrification, from which a Department of the Industrial Enterprises Electrification branched out in 1954 and was headed by Candidate of Sciences (Engineering) Gavriil Soldatchenkov. Soon, after he tragically passed away, the Department was headed by Associate Professor Nikolai Kalin. Among the Department’s founders were Yu.A. Bortsov, G.V. Suvorov, Yu.S. Usynin, M.V. Gelman, and S.D. Levintov.

From 1962 through 1972 the first department was headed by Associate Professor, Candidate of Sciences (Engineering) Samuel Levintov. Under his guidance an efficiently functioning team was formed and achieved significant successes in academic and scientific-methodical work.

The main principle of the Department academics’ work was close connection of scientific studies with the academic process, and Gavriil Soldatchenkov managed to organise an excellent laboratory base. The evolving of the Department of Electric Drive and Automation of Industrial Installations took place at the same time with the intensification of works on developing the Ural region metallurgy. That is why since the very moment of the Department’s functioning it established a scientific school on theoretical and experimental research in electric drives and industrial systems of the automation of rolling mills and other equipment of metallurgy plants.

The academics of the Department were actively participating in reconstructions of automated electric drives at multiple enterprises, including Magnitogorsk Iron & Steel Works, Chelyabinsk Pipe-Rolling Plant, Chelyabinsk Metallurgy Plant, Chelyabinsk Electrometallurgy Plant, Orsk-Khalilov Metallurgy Plant, and Orsk Non-ferrous Metal Working Plant. A vast experience was accumulated and consolidated in the field of developing the frequency methods of studying the complex electromechanical systems, creating the theory and means of technical diagnostics and adjustment of electric drives, and improving their interference resistance, what allowed to significantly shorten the time of start-up of complex electromechanical aggregates of rolling mills, as well as improve their efficiency and reliability. 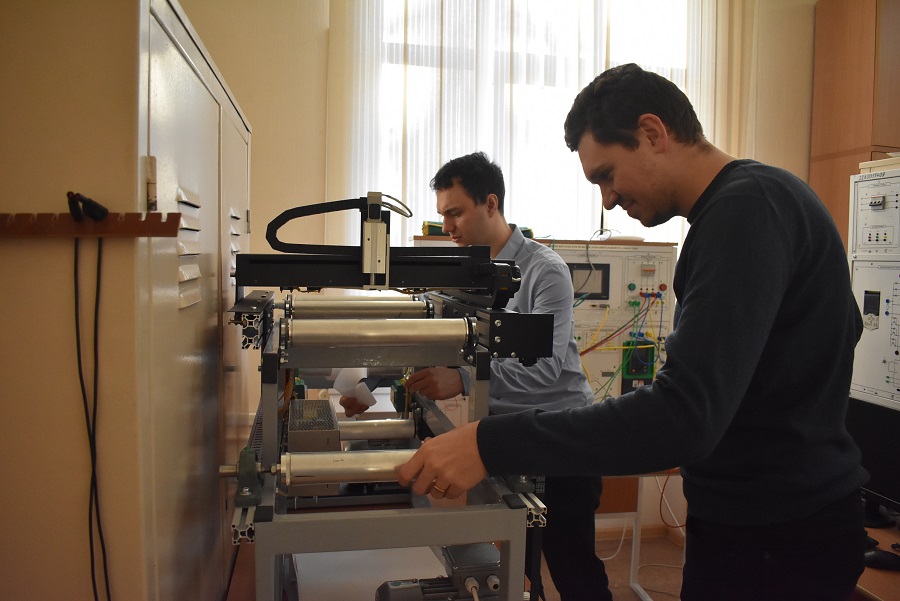 From 1973 through 1978 the Department of Electric Drive and Automation of Industrial Installations was headed Associate Professor, Candidate of Sciences (Engineering) by Gennadiy Suvorov. During this period research continued in the field of metallurgy electric drives, sensors of process parameters and power electronics. Technical means were developed for the frequency analysis with high sensitivity and expanded frequency range Vektor-2 and Vektor-2М, allowing to determine the frequency characteristics of closed-loop systems directly in the course of the technological process; and also new-generation devices were engineered, which were adapted to the valve electric drive systems – multichannel recorders of the parameters of electric drives during their actual industrial operation. This field was particularly worked on by: O.I. Osipov, A.N. Serebryakov, Yu.S. Shestakov, Yu.S. Usynin, L.I. Tsytovich, S.M. Butakov, and V.P. Matsin.

Starting from 1978 the Department was headed by an Honoured Worker of Science and Engineering of the Russian Federation, Doctor of Sciences (Engineering), Professor Rafaiz Gafiyatullin. And the following year, as was mutually decided upon by the USSR Mingeo (Ministry of Geology) and Minvuz (Ministry of Higher Education Institutions), an industrial laboratory was organised at the Department for creating and implementing of modern electric drives of geological-survey drilling machines. Under the academic advisory by Rafaiz Gafiyatullin the Department of Electric Drive made an important contribution to creation of defence machinery.

As a result of the research performed by the Department’s academics, electric drives for instrument complexes were created, as well as control systems for high-accuracy servo drives based on torque motors.

This work continued under the academic advisory by Yu.S. Usynin, who defended his doctoral thesis at Moscow Power Engineering Institute in 1994.

From 2003 the Department of Electric Drive and Automation of Industrial Installations was headed by Doctor of Sciences (Engineering), Professor Leonid Tsytovich. 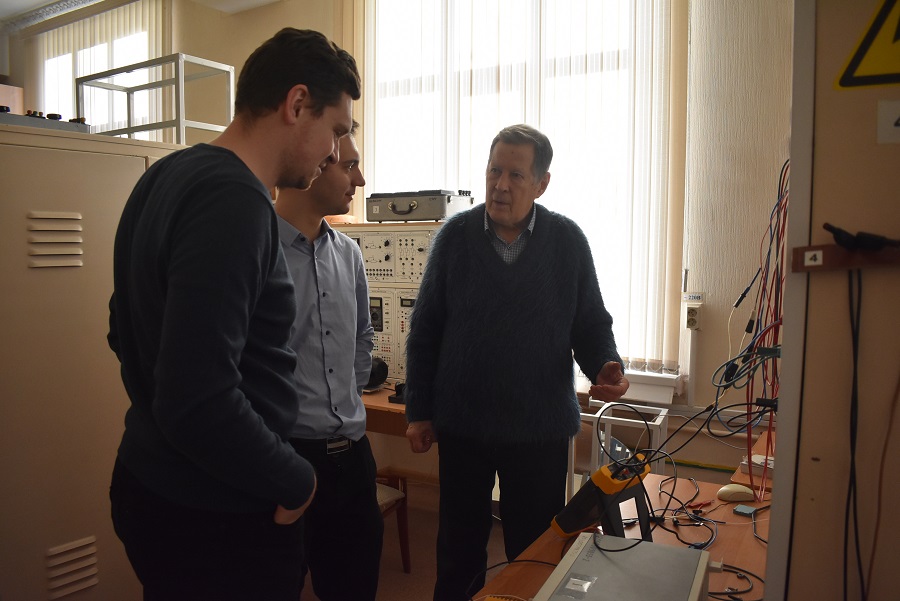 Today the Department of Automated Electric Drive, which also comprises the scientific school on Differential Electric Drives with Synchronous Outside-excitation Jet Engines, is headed by Aleksandr Shishkov, and the research field is being developed by the eldest academic of the Faculty of Energy and Power Engineering Yury Usynin.

He was born on June 27, 1937 in the town of Miass of the Chelyabinsk Region. In 1959 he graduated from Chelyabinsk Polytechnic Institute (now SUSU) majoring in Electrification of Industrial Enterprises. Having completed his postgraduate studies at Moscow Power Engineering Institute under academic advisory of Professor Vasily Bychkov and defended his candidate thesis, he returned to Chelyabinsk. Starting from 1959 he was working at Chelyabinsk Polytechnic Institute (CPI), starting as an assistant and becoming a professor at the Department of Electric Drive and Automation of Industrial Installations. During the period from 1965 through 1967 occupied the post of Deputy Dean of the Faculty of Energy and Power Engineering.

At present Yury Usynin is a professor at the Department of Automated Electric Drive of the SUSU Institute of Engineering and Technology reading lectures on the Theory of Electric Drive, and the Electric Drive Operating Systems courses.

The field of scientific interests of this researcher are the electric drives of cold rolling mills. The results of his work were at one time implemented at Magnitogorsk Iron & Steel Works, at Yuzhuralelektromontazh Trust, and at Novosibirsk Metallurgy Plant named after Kuzmin.

Being the Honoured Worker of the Higher Education of the Russian Federation, Yury Usynin has twenty inventor’s certificates and is the author of about one hundred and fifty research papers, including four monographs and seven study guides. Back in his time he was a member of the dissertation councils of SUSU and Nosov Magnitogorsk State Technical University.

“Differential electric drive, synchronous outside-excitation jet engines are just a relatively recent variant of an electric drive. The first publications date back in the 80s. I’ve been working on the differential drive for several decades now – I started this work as a postgraduate already back at Moscow Power Engineering Institute and continued it at SUSU,” explains Yury Usynin. “Differential electric drive is one of the variants of a multi-connected electric drive, that is the one with multiple physical interconnections. On the one hand, multiple connections means something difficult, complicated and inexplicable, but on the other they open additional possibilities, and the electric drive becomes viable, more controllable, and power generation improves.”

The drives with synchronous outside-excitation jet machines is not a firmly established term, but it has been adopted by many authors and leading scientific journals on electric engineering.

“This drive allows to make a machine simpler. A very smart and quite an efficient system of semiconductor control is created. Earlier we used to design electric drives as follows: we selected an engine at the storehouse, then selected a converter suitable for it, and then – the control system elements suitable for this converter. But these things should be engineered all together, in a complex,” believes Professor Usynin. “And if we put the priorities this way, then in a number of cases it would be more efficient to select an engine for a certain converter. This is a very difficult specialisation, an innovative one. To have a thorough understanding of electric drives, in addition to traditional knowledge of mathematics and physics, one needs to be well familiar with electric machines, power electronics, and control theory. We use complex control algorithms. This is a field, where digital industry has arrived in time. We are the users of digital devices, and when engineering our electric drives in particular, we use controllers and digital sensors.”

For instance, Dmitry works on the topical issue of electric drives and energy saving in the rolling mills of a pipe-rolling plant producing seamless tubing, which is used for example in the manufacture of helicopter rotor foils.

Other team members are dealing with the main motion drive in cold rolling of seamless pipes, and with the axial drive, where accuracy is very important.

In the future the scientific school plans on working with a company, which is headed by a SUSU alumnus. For a project, not only the financial indices matter, but also the possibility of achieving efficient results. In particular, there exists a need for electric drives for drilling rigs.