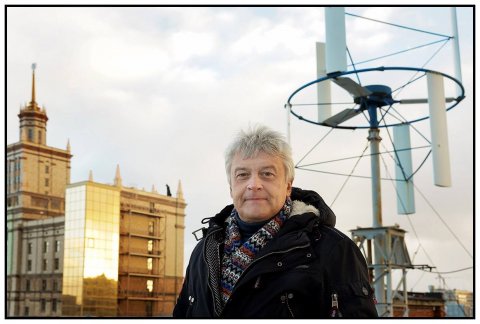 According to predictions by South Ural State University researchers, in just about half a century the mankind’s way of life will change forever. Oil and gas reserves will be exhausted. If we do not to consider alternative energy sources in advance, our descendants will be forced to move into caves and endure a primitive existence.

SUSU professor Evgeniy Solomin has been successfully working on developments in this field for a long time now. His field of scientific interests includes wind and solar energy. Our conversation today is about ecology and renewable energy sources.

Evgeniy Solomin, born in the Chelyabinsk Region (Maslovo), studied at Chelyabinsk Polytechnic Institute (ChPI), and graduated from Budapest University of Technology (major in Robots and Robotic Complexes) with the specialty of an electrical engineer. He is Doctor of Sciences (Engineering), Professor of the SUSU Department of Power Stations, Grids, and Electric Power Systems, as well as Director of the Alternative Energy International Innovations Centre, member of the Group of Experts – Energy at the European Commission, Brussels, Belgium, and the author of over 200 research papers and more than 30 patents. For his scientific developments he is awarded 33 diplomas and two medals. He is married with a son.

– What motivated you to study green energy?

– The triumphant reign of hydrocarbons on our planet can’t last forever. Mineral resources are exhaustible, unfortunately. The day will come (already in the foreseeable future) when the last barrel of oil on Earth will be used. My students and I calculated it: there is enough oil for just 55 years more, gas – 50 years, and uranium – 35 years. If we don’t learn to use the sun and wind before natural resources are spent, the prospects are unenviable: stone age, caves, and no communication. But if we master green energy, we’ll still have computers, TVs, and phones.

Research, developments, and the creation of various approaches to using renewable energy sources are important and timely. It is obvious that without heat, light, and power supply for technology, our technogenic system is doomed. Further development of alternative methods of energy production is important, strategically-correct, and economically-justified. In addition, based on the tests we’ve conducted, I can say that there is no doubt about the success of implementing such developments.

– What do you prefer in terms of science: the sun or the wind?

– The wind, as this is the main field we are working in. But if we give it a thought, the sun is a prime factor. The wind is the result of the sun rays activity. Solar batteries are a convenient source of electricity which does not require serious maintenance. However, they have two significant disadvantages: no power supply at night time, and low efficiency in the locations far from the equator, due to the angle of the solar rays. In addition, in regions with snowfalls, the experience of using these sources has shown that maintaining them during winter requires a lot of labour, since solar panels are subject to icing and are therefore practically unsuitable for the 3/4 of the planet.

Wind power plants also cannot be considered as a permanent energy source since the wind does not blow continuously, and quite some time is required for their repairs and maintenance. However, as of today, namely the wind power plants used in combination with storage vessels are considered to be the most profitable and reliable investment in regions where solar batters are inefficient. And this is a large part of our planet. What is more, the choice of energy sources in marine and ocean areas will fall on wind power plants for a whole range of reasons. Our wind power installation, by the way, is patented in 47 countries and such plants are successfully operated in the USA and Japan.

Meanwhile, Chelyabinsk researchers have gone further. The team, guided by Evgeniy Solomin, has created hybrid environmentally-clean wind-solar installations, which are a practically guaranteed option for uninterrupted power supply. But the main and very promising field is still the wind power engineering. Evgeniy Solomin began his work in it already back in the late 90s of the past century.

Upon graduating from the Budapest University of Technology, he lived for a few years in the USA and worked in robotics. Then together with his partners he organized a research and engineering centre in Russia. There were some interesting developments. In particular, the drive gear motor for the Curiosity Mars rover, a generator for the NASA super flywheel, and electric motors for plunging into a volcano. This device works for literally a few seconds before combusting, but researchers can gather a lot of helpful information in this short period of time. Today, Evgeniy Solomin is passionate about devices that make it possible to generate renewable energy and convert it to the type needed – heat or electricity.

How to Save the Planet

– Your developments are one of the ways out of this ecological crisis, which many people are talking about. Though, this path is long…

– My students and I calculated the likelihood of global warming. If we continue to pollute the planet as we are doing now, the polar ice caps will melt in 200-300 years. But we will run out of oil and gas much faster, so we will not have anything to pollute the planet with after that. So, there will be no ecological crisis. It is only possible in case of a nuclear war.

– You mean to say that everything is OK with the ecology right now?

– Yes. I don’t see any real acute problem of the planet pollution. I’ll give you an example. I delivered a report in Dusseldorf once. I spoke about how we had developed an absolutely environmentally-friendly wind power plant, which even squirrels were not scared of. Everyone clapped and cheered to that. But then a representative of Greenpeace said ‘You’ve made things even worse than they were before! Animals used to run away from these installations, now they won’t feel them.’ And people again started imagining our future as apocalyptic.

According to Professor Solomin, the USA is the main supplier of greenhouse gases into the atmosphere. The USA is polluting the world around six times more than the rest of the world. There has not been such an amount of carbon particles in the air since prehistoric times, when the Earth’s atmosphere was filled with carbon dioxide.

– In the California Academy of Sciences they have a huge poster board displaying the aftermath of global warming. When all of the polar ice caps melt, do you know what the highest point on the planet will be?

– Taganay! On the map, Mount Everest is flooded, since water masses will gather around the equator. No wonder that in the 90s the Americans began to buy lands in the Ural region. But if we get to that point, the system will become uncontrollable. And we don’t know whether or not it will find a stable balance. There will be no one left to find that out. So, in order not to aggravate the process of global warming, we are developing various designs of wind power plants. But these are mostly vertical axis turbines. Unlike horizontal turbines, these plants do not depend on the direction of the wind. And in periods when there is no wind, we use a hybrid installation with a solar module.

– And if there is no wind and no sun?

– That would be a problem (laughs). In that case, we’d use batteries. We use many technologies. Jointly with the Italians we have developed a hydrogen-closed cycle system. Using the sun and the wind, we produce hydrogen, and which is then used to generate energy. Though this system is not efficient, but it can work in the Arctic, for example. By the way, we have a wind power complex there, which we installed at the request of the Research-and-Development Institute of Space Instrument Engineering. The institute also purchased 20 foreign analogues. The whole shore is now littered with the blades of those foreign installations. Everything was blown away by the wind, but our plant is still working.

– You probably dream of saving the planet like many researchers?

– I dream of going on vacation to Thailand (laughs). To be honest, I don’t have any global aspirations. We are just working.

Professor Solomin’s “smart” house is equipped with alternative energy sources and all possible kinds of self-made electronics. The researcher is not afraid of power outages. Evgeniy Solomin also created a hyperboloid for home use. He uses solar energy to grill kebabs, while the rotating motor is also powered by the sun. It turns out very tasty! Right now the professor is working on the system of recognition of the size of meat slices, so that the speed of rotation sets itself automatically. But this is just a hobby which he enjoys in his free time when he is not busy with his research.