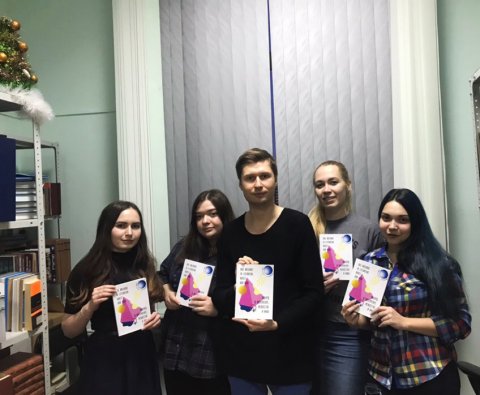 The SUSU Department of Russian Language and Literature has been working with the University of Zurich Department of Slavonic Studies for several years now. The partnership is being fulfilled in all possible scientific fields: delivering lectures, participating in conferences, and joined work of the student journals SlavicumPress and Divan.

This year, the partnership reached a new level of productive cooperation. The universities have published a combined collection of materials of the online conference for students, Master’s students, and postgraduate students organised May 25th-26th, 2018 by the University of Zurich Department of Slavonic Studies and the SUSU Department of Russian Language and Literature, and dedicated to modern issues in art and culture. The collection was titled The Absurd in Literature, Art, and Film.

The book includes works by participants from universities in Zurich, Lausanne, Constanta, Munich, Belgrade, the Kazakh Ablai Khan University of International Relations and World Languages, and, of course, by those from South Ural State University. The authors were not only united by their field of study but also by their focus on modern methodological solutions – the majority of the papers were completed using the inter- and multimedia approach to analysing works of literature, art, and film.

The sphere of interests of young researchers ranges from Russian folklore (absurdity in the fairy tale The Speckled Hen) to the latest Russian literature, what demonstrates their awareness of modern scientific information and the newest methods of research. The wide spectrum of papers is testament to the polygenetic nature of the phenomenon of the absurd as an object of linguistic, literary, philosophical, and artistic study.

Evgeniy Smyshlyaev, lecturer at the SUSU Department of Russian Language and Literature, took on the work of designing this publication, which is also accompanied by an electronic version. This generation of young researchers increasingly needs to digitize books, removing borders on the way to obtaining knowledge.

Holding of joint conferences and publishing a collection of materials offers a new experience in scientific cooperation, which opens significant prospects for partnership.