The Science of Rolling

Russian scientific schools of roller operators, established within the 20th century, use two generalized approaches – the force balance method and the energy method, which have modifications in their structures. The founder of the Chelyabinsk scientific school of roller operators was Vladimir Vydrin (1920-1988), postgraduate student of one of the pioneers of the Ural scientific school of metallurgists, Professor at Ural Polytechnic Institute, Akim Golovin. In 1955, while being already a candidate of engineering sciences, Vladimir Vydrin headed the CPI Department of Metal Forming and had been acting as its Head till 1988. The Doctor’s dissertation defended by V.Vydrin in 1961 entitled “The study of the rolling process as applicable to special cases” launched the beginning of a new research area. The scientist considered the set goals from the position of the energy conservation law; based on this principle, he had been developing a unified theory of interaction between the rolls and the strip, which demonstrated an inextricable qualitative and quantitative connection of kinematic phenomena with dynamics of rolling as well as the role of the neutral angle in the deformation zone as some kind of a regulator of energy balance of the rolling process.

The energy method for the first time provided the opportunity to correctly and theoretically properly describe the non-stationary process of filling the deformation zone with metal from the moment of contact of the exposed face of a workpiece with rollers till the process’s transition to the stationary condition. This is the only method that allows comprehensively characterizing the rolling process, taking into account its kinematics, energy parameters, and physical and mechanical properties of a metal.

Representatives of the school invented principally new processes: “rolling and drawing” (V.N. Vydrin, L.M. Ageev) and “rolling and forging” (V.N. Vydrin, G,I, Koval). The first of them was patented in the USA, Japan, FRG, England, France, Italy and Sweden and was widely acknowledged and applied in national and foreign industry.

Establishment and development of a scientific school takes place when its founder acquires students and followers, in other words, the employees who create its total product by common efforts. Within the first decade, they were the first postgrads and degree applicants of the Department, including those not listed among its staff members. Among them are the names that should be mentioned foremost: L.M. Ageev, Yu.T. Batin, V.G. Dukmasov, V.I. Kraynov, V.P. Polsky.

Contribution of the Chelyabinsk school into the national and the world’s science regarding rolling industry is in the following: an energy theory of interaction between the rolls and the strip during rolling, based on the energy conservation law, had been elaborated, developed and widely acknowledged; a modern theory of the continuous rolling process had been created based on the energy approach; a theory of filling the deformation zone during the period of the strip’s biting by the rolls had been elaborated; a connection between the kinematic (forward creep) and deformation (spread) characteristics of the rolling process had been determined with the joint use of the energy conservation law and the minimum energy law; the theory of deformation under sheet rolling had been elaborated from the position of providing the stripe’s evenness; the research area of Asymmetric Rolling Processes had become widely developed; a new process called “rolling and forging”, which became the foundation of such research direction as Stepwise Rolling Processes had been invented; a big number of research works had been completed in the area of Rolling Processes in Multiroll Gauges; large-scale research had been conducted in the sphere of theory and practice of the die-rolled section rolling; methodology and equipment for plastic layer research of mechanical properties of metals and alloys in a wide range of measurement of thermomechanical parameters had been elaborated; theoretical fundamentals of precision rolling of simple and shaped profiles had been elaborated.

Proceedings of research works conducted by the Chelyabinsk school of roller operators had been frequently publishing in foreign periodicals. Chelyabinsk scientists took part in many international conferences, congresses, symposiums and exhibitions.

The developed technologies and equipment had been introduced at dozens of domestic enterprises, the major of which are: Novosibirsk Metallurgical Plant and Zhdanovsky Iron and Steel Works; Metallurgical Plants in Chelyabinsk, Karaganda and Cherepovets; Balkhash Copper-Smelting Plant and Uzbek Refractory and Resistant Metals Integrated Plant (UzKTJM).

In the period from 1997 till 2002, a number of research and project works had been completed for Russian enterprises. The largest among them was the project of reconstruction of steel-rolling manufacture for Mechel OJSC and the project of ShP 280/MK-330 semi-continuous rolling mill for manufacture of rods and wire made of special steels and alloys for the Ural Plant of Precision Alloys. 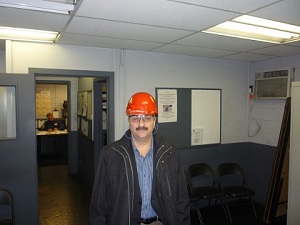 At the present time, the Chelyabinsk school of roller operators is headed by Professor at the Department of Metal Forming of the SUSU Institute of Engineering and Technology, Doctor of Engineering Sciences, Professor Aleksandr Vydrin.

As noticed by Professor Vydrin, the piercing mill is the most complex of all rolling aggregates, from the position of both the production process and theoretical description of the process.

“Research works have been conducted to calculate the settings and optimize this process, to improve calibrations of the manufacturing instrument. Three Candidate’s dissertations have been defended in this area. Speaking about the rolling-off process, in the essence, a pioneer approach to determination of speed rates of a continuous rolling mill has been developed on the basis of the energy theory of rolling, and the research on calculation of calibration of rolls allowed enhancing accuracy of geometrical dimensions of pipes more than two times,” says the scientist. “Two Candidate’s dissertations have been defended in this area. One Candidate’s dissertation has been defended on the topic of Reduction. This work allowed essentially reducing consumption of metal in pipe manufacture.” 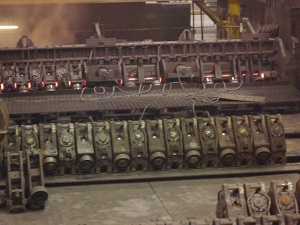 One of the necessary operations while producing drill pipes is pipe-end upset, which is also related to metal forming under pressure: the ends with the thread must be thicker and larger in diameter than the main pipe body. Formulas for correct determination of the effort necessary for the upset were concluded for the first time on the basis of the energy theory of rolling. Moreover, there is a transition zone between the “thick” and “thin” parts of a pipe; the longer the zone is the better. Previously, its size had been determined on the basis of practical experience. Using simulation, scientists from SUSU and RosNITI JSC managed to find out what the length of the transition zone depends on; they also found ways to improve the process of such pipes’ manufacture.

The scientific school cooperates with Sinarsky, Volzhsky and Seversky Pipe Plants, as well as with Taganrog Metallurgical Plant and even with a number of plants in the USA and Romania.

Nowadays, the research area of Energy Theory and Practice of Seamless Pipe Manufacture is being developed by A.V. Vydrin together with his former postgraduate students, who have successfully defended their Candidate’s dissertations. Some of them - for example, Aleksey Korol, Evgeniy Shkuratov, Vyacheslav Shirokov – have become lecturers.

The largest project that is being implemented by the scientific schools right now is development of a process assignment for design of a new pipe-rolling aggregate for Sinarsky Pipe Plant.

“We’ve achieved good results. In order to compile this assignment, we conducted a lot of experimental and theoretical research as there are very many requirements to satisfy: we need to achieve accuracy in geometry of the manufactured pipes, high performance rate of the aggregate; we also need to study the possibility of deforming the new difficult-to-form marks of steel,” explains Professor Vydrin.

Moreover, the scientists started working on digitalization of production processes; in this direction, the most prospective cooperation is carried out with the Seversky Pipe Plant and the Taganrog Metallurgical Plant.