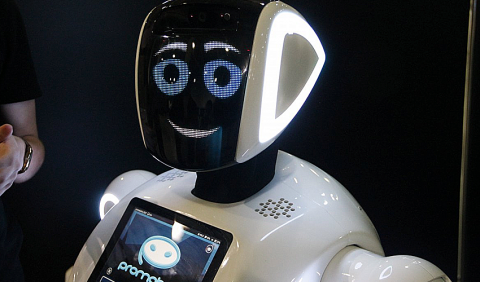 In China, South Ural State University (SUSU) created its own network of Centres in order to promote Russian language and enhance the quality of training of Chinese citizens before their study in Russia. As reported by the SUSU Press Service, a robot named Vanya is going to help students to learn “the great and mighty” Russian language.

The hardware and software complex has been developed by scientists and academic staff of the university. Vanya can identify speech and generate answers in Russian language. It serves as a teacher’s assistant. The invention obtained a grant within the federal target-oriented programme entitled “Russian Language”.

“Analytical review of the complex’s components showed that the humanoid NAO robot produced by Aldebaran Robotics can become a companion, an assistant or a research platform. At SUSU, NAO was renamed into Vanya,” said lecturer of the SUSU Institute of Linguistics and International Communications, Yulia Polyakova, in her interview to The Stimul.

Using the robot in the learning process makes efficient presentation of material in real life to become possible. Interactive learning tasks allow working on development of various skills in all types of speech activity of international students. Such means of communication (a command, questions and answers) allow making both educational and real-life communication in the language under study to be an essential component of the learning process. At that, the especially important thing is development of innovative tasks featuring the robot for international students, as the main goal of such tasks is activation of regular thinking of a student at the initiation stage. In the process of learning Russian language, pronouncing, lexical and grammatical skills of international students get formed. On their basis, the abilities of listening comprehension, speaking and reading are developing as well. However, obtaining these abilities is impossible without active participation of students themselves. It is precisely the communication-targeted tasks that are intended to help students learning to use the language in specific situations.

“The robot, equipped with a speech identification system, determines coordinates of the sound source and turns his head towards it; by doing this, he not only maintains visual contact with an international student but also listens to him or her attentively, reacting to the words of the one who speaks. Vanya can identify any text and then cite it out loud and therefore provide oral communication; he also can read newspapers, books or emails. Tactile sensors allow animating the dialogue by touching them and getting the expected reaction of the robot in a conversation,” says Yulia Polyakova.

Vanya has a visual system that allows him taking photos and videos, use electronic mail, distinguish colours and numbers, search out and identify faces of students, remember their names and transmit information to a PC or a network in the online mode.

According to Yulia Polyakova, a teacher can form the desired behaviour of the robot on the go, in a dialogue during a class: adjust the speech generation speed and voice intonation. In the process of a dialogue, Vanya plays high-quality audio records in a natural voice. Therefore, using the robot for working on listening comprehension, learning poems, holding pronunciation training or phonetic warm-ups, conducting dictations or polishing speech etiquette in contextual dialogues or choral pronunciation can be very efficient.

“We are going to keep improving the robot,” said Associate Professor at the Department of Information and Measuring Equipment, Dmitriy Katsay, in his interview to The Stimul. “We are talking about extension of Vanya’s capabilities by his inclusion into the composition of a distributed information system. Small computation capacity of the robot will be augmented by high-performance external computers. Vanya will be able to transmit audio information to external computers for its processing and interpret the results using his own audio means.”

According to students, Vanya is an excellent helper in learning new material, and one of his major advantages is that he expresses only positive emotions.

Students of Beijing Union University, Xuchang University, Zhengzhou University of Aeronautics, Shenyang University of Technology and some other partner universities of SUSU got the possibility to undertake free-of-charge Russian language learning under supervision of Russian teaching staff.

“Chinese students coming to study in Chelyabinsk within double degree programmes or the academic mobility programme are distinguished by their determination and diligency; however, even for them learning Russian language is not easy,” noted Coordinator of activity on forming the partnership network, Head of the SUSU Institute of Linguistics and International Communications’ Department of International Relations and Regional Studies, Liudmila Shestakova. According to Liudmila Shestakova, studying in the Pushkin Institute Centres will help Chinese students overcoming the language barrier.

In 2019, the SUSU Pushkin Institute Centre in China will organise the traditional total dictation, the Day of Slavic Writing System, the Day of Russian Language and other events.

Based on materials from stimul.online