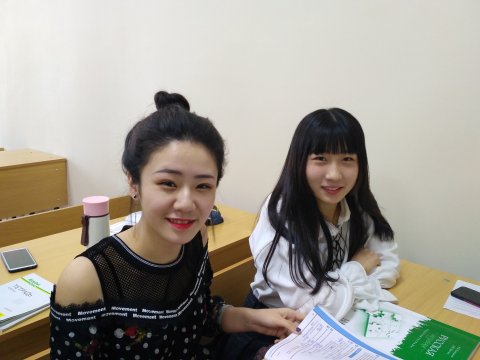 The SUSU Pushkin Institute research, education, and coordination centre holds events for students from China aimed at promoting Russian and education in Russia. Students were very interested in this form of education.

The SUSU Pushkin Institute RECC has organised four large projects for students – the International Online Olympiad in Russian as a Foreign Language, the Russian calligraphy contest, the Russian as a Mirror of Digital Transformations project contest, and the Russia and China: Country – Language – Culture photo contest. These events make it possible for students to test their knowledge of Russian language and culture. It is also important that they were developed by taking into consideration the specifics of SUSU as a university of digital transformations, and many of the assignments involve knowledge of modern technologies.

Some of the participants were students from Heihe University currently studying at SUSU. They talked about always trying to take part actively in events that allow them to use Russian outside of the classroom and learn about Russian culture.

“I believe that these kinds of events play an important role for students, because language learning is a living process. Knowledge needs to be applied practically, and not just in lessons. I would also like to participate in events that have games in Russian, attend exhibitions and concerts to learn more about Russian culture and traditions. I hope with all my heart that SUSU continues to become better and better and train many more excellent specialists,” noted student Yang Yanru.

“Russian culture is very attractive and interesting, so I hope that I will be able to find out everything about it at this university. I think that participation in extracurricular events is very helpful for us. We can grow and improve during games,” said Zhang Qi.

The students rated all of the SUSU Pushkin Institute Centre events highly, but they said that the Russian calligraphy contest was one of the most interesting. Participants were asked to complete assignments on special forms. The forms included assignments testing their Russian calligraphy skills and knowledge of the alphabet. They were developed by associate professor of the Department of Russian as a Foreign Language Yulia Kazakova taking into account the specifics of international students’ education.

“I wanted to take part in the contest to test my skills and develop new abilities. It was interesting to me to learn the old Russian alphabet, many old words were used in the assignments. Completing these assignments, I thought about how rapidly the Russian language developed,” said SUSU student from China, Fu Huiei.

“I learned about this contest from my teacher, and as a student studying in the SUSU Institute of Linguistics and International Communications, I couldn’t miss this opportunity. There is a proverb in China: “hieroglyphs look like the person who has written them”. And of course, calligraphy can show our unique traits in writing. I was especially interested in the last assignment which showed old Russian numbers. I have never seen these before, but thanks to this contest, I know now what they looked like,” said Sung Xianchuang.

Students who are enrolled in partner universities in China were very interested in the Pushkin Institute Centre events, especially those from the Shenyang University of Technology. They especially appreciated the accessibility and clarity of the requirements for contests and Olympiads, since the creators took into account the specifics of Chinese speakers’ perception of information.

“I would like to participate in events from the Pushkin Institute Centre because this allows me to speak with international students and practice my Russian. I learned about the contest from the centre’s site and decided to participate in it to improve my Russian proficiency. I liked that I didn’t have any communication barriers when completing the tasks,” noted Guo Zhe, student from China.

“The part I liked most of all was answering questions in Russian, this was great practice. These kinds of events make it possible to develop the interest of students in another culture. I want to participate in events that help me find international friends,” said student Luo Xu.