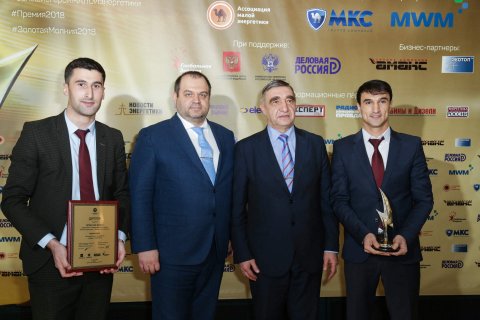 In the congress centre of the Chamber of Commerce and Industry of the Russian Federation in Moscow a ceremony of the 6th International Award Distributed Power Generation - Great Achievements was held. Among the award laureates were scientists from SUSU.

September 1st an international contest was launched, which had to reveal the best projects of 2018 in the field of distributed power generation and medium-scale power generation. The contest participants included postgraduates from the Department of Electrical Engineering of the Faculty of Energy and Power Engineering of the SUSU Institute of Engineering and Technology Bakhtier Kosimov and Dilshod Aminov together with their academic adviser, Head of the Department, Doctor of Sciences (Engineering) Sergei Gandzha.

On December 7 the contest results were announced in Moscow. The prestigious award for the best project in the sphere of distributed power generation and alternative generation was instituted by the Russian Distributed Power Generation Association with the support from the All Russia Public Organisation Business Russia, Power Generation Committee of the Russian Federation State Duma, and the Russian Federation Ministry of Energy. Representatives of more than 50 finalist companies from Russia, Japan, Italy, Germany, and the Republic of Belarus attended the award ceremony.

The assessment was performed by an international committee, which consisted of experts from several countries.

The scientists from SUSU submitted 2 projects for the committee’s consideration: Green Source of Renewable Electric Energy – 10 kW Wind Power Plant Based on No-contact Doubly-fed Electric Machine with a Control System; and Electric Power Block Based on the Technology of Methanol Production from Water and Carbon Dioxide of the Air.

In their presentations the researchers suggested a solution for the global problem of an unlimited storage of electric energy. According to Doctor of Sciences (Engineering) and Head of the Department of Electrical Engineering of the SUSU Faculty of Energy and Power Engineering Sergei Gandzha, the novelty is that the suggested project unites as much as five technological processes into one chain: electric energy – chemical energy – electric energy. No one in the world has ever done something like that.

“With electric power we produce methanol, and then use it in fuel cells (methanol batteries), while returning electric power and heat to consumers. The volume of methanol that can be stored is practically unlimited. We can use the already existing oil- and gas pipelines infrastructure for that purpose, and transmit the stored energy for long distances,” says Sergei Gandzha.

Postgraduates of the Department of Electrical Engineering of the SUSU Faculty of Energy and Power Engineering and the main performers of the project Bakhtier Kosimov and Dilshod Aminov share their impressions.

“This is the first time that I’m participating in an international contest. We tried to do our best, so our fruitful work brought us this award. We were very happy to be representing our university, that is why for all that we would like to thank our academic advisor Sergei Gandzha and the university management, who provided us with the opportunity to perform our research,” says Bakhtier Kosimov.

“At the award ceremony in Moscow we wouldn’t know if we won or not until the very last moment, since there had been many applications and strong competitors. But when we heard our names being announced, we couldn’t be happier for sure. I’m planning to keep participating in scientific contests and working on our project,” says Dilshod Aminov.

The project’s academic advisor Sergei Gandzha explains who might find their innovation useful.

“I believe that the Chelyabinsk entrepreneurs will be interested in this innovation not just from the point of view of energy storage, but also with regard to the ecology improvement. Currently, for the industrial enterprises, СО2 means hazardous emissions into the atmosphere. And within our project carbon dioxide is a valuable raw material used for methanol production,” says Sergei Gandzha.

At present the task set before the SUSU scientists is the creation of a laboratory unit for detailed studying and refinement of all the links in the process chain. The next stage is performing of the research-and-development works, which are supposed to make the project as close to industrial mass production as possible. 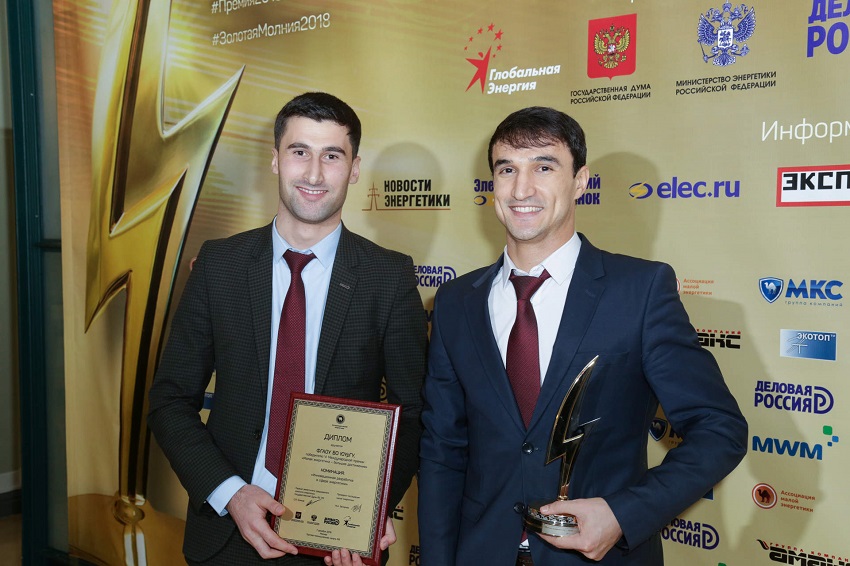 Every year the International Award Distributed Power Generation - Great Achievements marks the outstanding research studies and innovations in the field of power generation, which help the humanity solve the most pressing and difficult problems related to power generation. The award was established in 2002, and the world’s leading scientists are among its laureates. 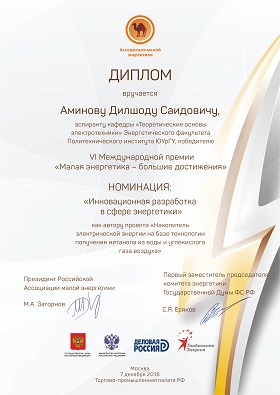