Why do Russians love New Year’s? It might strike you as odd that Russia celebrates New Year for more than a week. The tradition of making New Year celebrations a big deal might be traced to the fact that during the Soviet period all religious holidays were banned and Russia was left only with New Year’s. Today the Russian New Year period is all about having fun with friends and family when people make the most delicious meals and watch ever-popular Soviet movies. What is so special about Russian winter holiday season? Read below!

Russia is the biggest country in the world, spanning eleven time zones, which means the country celebrates New Year’s 11 times! The first Russians celebrating the arrival of the new year are the citizens of Kamchatka and Chukotka; last but not least, citizens of Kaliningrad raise their glasses to toast to the new year. Kaliningrad celebrates New Year’s together with Ukraine, Greece, Israel, and several South African countries. While Kaliningrad drinks champagne and lights fireworks, citizens of Vladivostok brace themselves for the 1-January hangover. 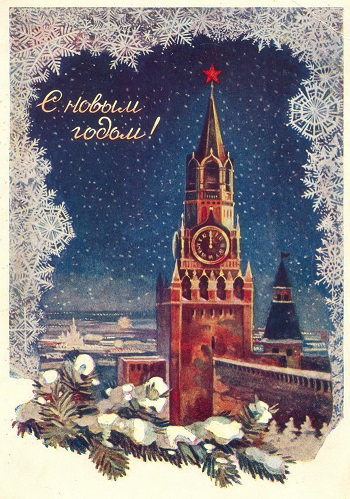 Old New Year is not a joke

It is true that for some Russians holiday season is not over until January 14, when Old New Year knocks on the door. No one dares to take down the Christmas tree until that day. The tradition to celebrate Old New Year comes from the difference between the Gregorian calendar and the old Julian calendar. In 1918, Russia officially adopted the Gregorian calendar, but the Orthodox Church continued using the Julian calendar, according to which January 14 marked the changing of the year. Many Russian people still celebrate Old New Year in one way or another despite it not being an official holiday. Thanks to the USSR, Old New Year is recognised not only in modern Russia but also in former Soviet republics such as Armenia, Belarus, Ukraine, Moldova, Georgia and Kazakhstan. Welcoming the new year with the President

On New Year’s Eve or ten minutes to midnight, Russians find themselves in front of their TVs surrounded by their family and friends to watch the traditional New Year address by the Russian president. Usually, you can see the president giving his speech in front of the Kremlin. In his speech, the Russian president remembers the major events of the passing year, talks about the plans for the country, and makes New Year wishes for Russians. No matter their political views, this New Year speech glues all Russian people to the screen. The speech is broadcast in all time zones of Russia and becomes available on the internet quickly, which means “western” Russians can watch the speech in the afternoon of December 31. The first New Year Address dates back to 1941 when the Soviet government broadcast a statement about the state of the country during the war.

After the President’s speech, the famous Spasskaya Tower is broadcast, and we hear the ringing of the beloved chimes at midnight and officially welcome the new year. Russians believe that wishes made between the first and the last ringing always come true. 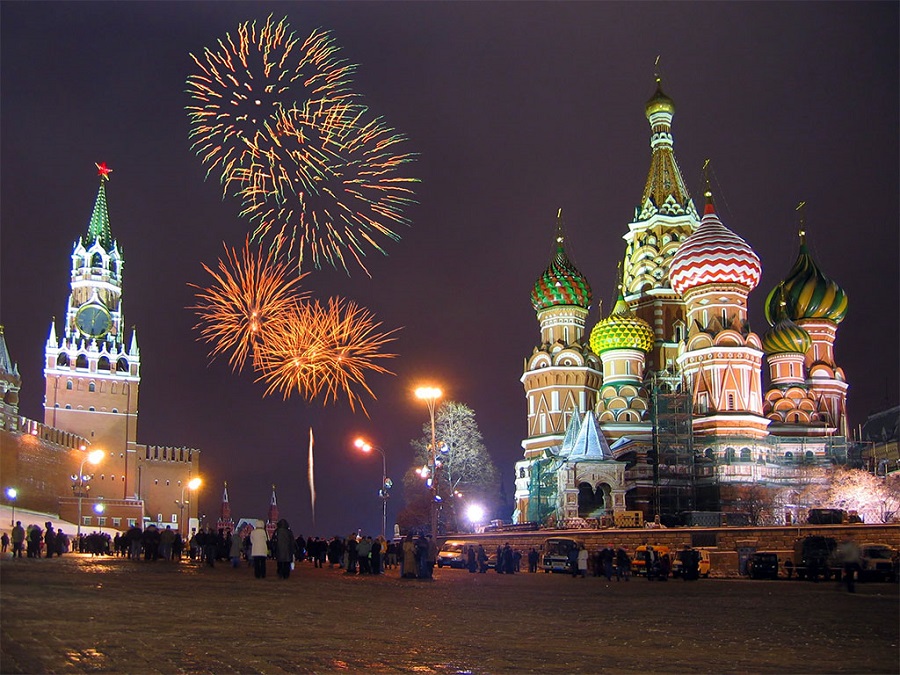 No New Year without Soviet films

What can better lead up to New Year than watching iconic films that put you in the festive mood? Throughout the last week of December to the middle of January Russian TV channels are all about classy Soviet films cherished by all Russian generations. It is a sort of unspoken tradition to binge-watch a series of New Year pictures that first appeared over thirty years ago. Apart from Home Alone, there is probably no Hollywood Christmas comedy that can overshadow the dearest Soviet films such as The Carnival Night (1956) by Eldar Ryazanov, Morozko (1964)  by Alexander Rou, Gentlemen of Fortune (1971), by Alexander Seryi, The Irony of Fate (1975) by Eldar Ryazanov, and Charodei (1982) by Konstantin Bromberg. Do not miss a chance to watch these films and try to uncover the mystery of the Russian soul.

Watch The Irony of Fate: Veliky Ustyug and Kostroma - the most Christmassy Russian cities

Do you know what the cities of Veliky Ustyug and Kostroma are famous for? Every Russian child knows the answer. The church-studded Veliky Ustyug founded in 1147 was seen as a provincial backwater until 1998 when this historical city was officially proclaimed to be the official ‘hometown’ of Ded Moroz (Russian Santa Claus). Today the city’s post office is one of the busiest in the world, receiving thousands and thousands of letters to Ded Moroz from children and adults. The Ded Moroz thing has become so popular during recent years, that the imaginary figure makes public appearance even in summer! If you decide to visit his residence in Veliky Ustyug, make sure you understand and can speak enough Russian, as the Russian Christmas wizard knows little English.

You have probably heard about Snegurochka, the granddaughter of Ded Moroz. She helps him answer the incoming letters, travels with him to different Russian cities and gives presents to children. Snegurochka does not live with her grandfather and has her residence in Kostroma. She owes her Kostroma roots to Alexander Ostrovsky, a great Russian playwright of the XIX century. Born and living in Kostroma, Ostrovsky wrote ‘The Snow Maiden”, a famous and tragic play about a girl made of snow who melts if her heart warms when she falls in love. As time went by, Snegurochka has become associated with winter holiday celebrations. Snegurochka’s residence was chosen to be a beautiful 19th-century terem (wooden house). People all over the country flock to Snegurochka’s home in Kostroma to participate in unique celebrations throughout the year.

The residence of Ded Moroz on Veliky Ustyug: http://www.dom-dm.ru/ Every Russian knows the more food on the New Year table the more prosperous the coming year will be. We Russians learn this mantra at our mothers’ knees. And we also learn that there can be no New Year celebration without the world-famous Olivier salad and Herring Under a Fur Coat or dressed herring.

The origins of the famous salad lie in the XIX-century Moscow. A chef of the famous French restaurant in Moscow Lucien Olivier created a salad with the secret dressing, but its ingredients changed depending on the season. At the beginning of the XX century, the famous restaurant closed and the Olivier’s recipe got published in different newspapers and magazines. Depending on the household, there began to appear various adaptations of the Olivier salad during the Soviet period. The salad ingredients were more affordable and less noble than during Tsarist Russia.  Today you can find an endless number of Olivier recipes on the internet. Grab some Russian friends of yours and make this yumminess together - it is bound to be fun!

Another traditional New Year dish for Russians is dressed herring or herring under a fur coat. The first thing necessary to know is that there is no real fur in this dish; the second thing is that it is not a cake as it might look from afar but a real salad. Herring under a fur coat is, basically a layer (or two) of salted herring nestled under several layers of cooked vegetables (like a coat), namely, potatoes, carrots, beetroots, and mayonnaise. Depending on one’s taste, you can also find eggs and onions in this salad. You can easily find various interpretations of the original recipe online and choose something to your liking. However, you should keep in mind that the more you store this salad in your refrigerator (preferably overnight), the more luscious the taste will be. 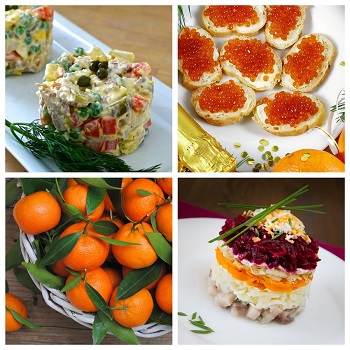 New Year’s is the most family-oriented holiday in the country. Everyone gathers around the festive table, and many people make special trips from other regions to celebrate with their families. If you happen to stay in Russia during the New Year period, you may be sure you will have a great time and lots of unforgettable memories.