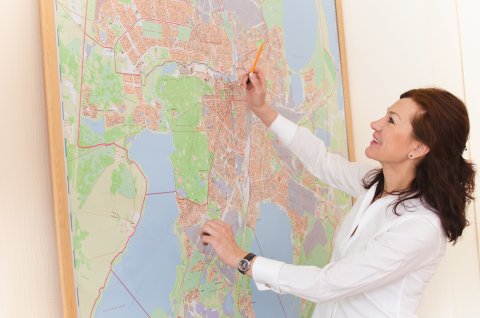 According to the decision by the Governor of the Chelyabinsk Region Boris Dubrovsky, 7.4 mln. roubles will be annually spent on digitalization of agricultural lands in our region in 2019 – 2021. More than 1.3 mln. hectares of agricultural lands, that is about 45% of plough land, have already been digitalized in the Chelyabinsk Region. The main contractor on digitalization of the municipalities’ lands is the Geoinformation Systems Research and Education Centre of South Ural State University. This is one of our progressive achievements as compared to other regions of our country, since more than half of the regions, except for southern regions, have not yet joined the creation of this electronic resource. This information was revealed at the meeting of the Interdepartmental Working Group for Land Issues of the Chelyabinsk Region Ministry of Agriculture, reports the press centre of the Regional Ministry of Agriculture.

The Working Group members include representatives of the territorial offices of the Russian Federal Service for State Registration, Cadastre and Cartography (Rosreestr), Federal State Statistics Service (Rosstat), Federal Property Management Agency (Rosimuschestvo), Federal Tax Service of Russia, Federal Forestry Agency (Rosleskhoz), Federal Service for Veterinary and Phytosanitary Surveillance (Rosselkhoznadzor), agrochemical service, and local government authorities; and their main task is to ensure the fullest and most up-to-date completion of the regional information system on agricultural lands. In their turn, regional data are submitted to the Unified Federal Information System on Agricultural Lands.

As the First Deputy Minister of Agriculture Aleksandr Zavalischin noted opening the meeting, we have to keep up the land digitalization progress, which we have achieved over the past year, since everyone is in need of the results of this work: the governing authorities – to make proper managerial decisions, the agricultural manufacturers using cartographic information while performing main agricultural works – to improve production efficiency and economic return, as well as the municipalities, which earn budget income from the land taxes.

The main problem while carrying out land digitalization is the lack of specialists and technologies. In the Chelyabinsk Region this problem has been solved through regional subsidy assistance. In 2018 by the decision of the Governor of the Chelyabinsk Region Boris Dubrovsky 2 mln. roubles were allotted for development and implementation of digital technologies aiming at rational use of the agricultural lands. Staring from 2019 and all through 2021 the annual amount of 7.4 mln. roubles will be allotted for land digitalization from the regional budget. All the municipalities of the region will be involved into the work on land digitalization and updating of the created interactive maps.

In 2018 the works on land digitalization have been performed in 10 districts: Uyskoe, Chebarkul, Sosnovka, Oktyabrskoye, Agapovka, Kizilskoe, Satka, Troitsk, Krasnoarmeyskoe, and Etkul. Each of these districts was allotted a subsidy of 200 thousand roubles, and the total amount of subsidies equalled 2 mln. roubles.

The Geoinformation Systems Research and Education Centre of South Ural State University has become the main contractor on the works on land digitalization in the abovementioned municipalities. According to the Centre Head Valentina Maksimova, the created cartographic materials will display the boundaries of fields, information on the cultivated crops, their active growing seasons, as well as data on the land plot owner, etc. At present the maps are being actively filled out, but it is already obvious that among the studied territories the best land efficiency is in Agapovka and Troitsk districts (with only 1% of derelict land there), as well as in Chebarkul District (2%), and the total unaccounted-for land tax for all the districts could amount to about 23 mln. roubles.

In the districts the Geoinformation Systems Research and Education Centre has held training workshops on working with the geoinformation system for the top managers and specialists of the district agricultural administrations, economic departments and land committees, as well as presented interactive equipment with uploaded land map. Moreover, the Centre facilitates in organising works on updating the regional information AgroGIS system with data from the districts.

According to the Head of Uyskoe Agricultural and Food Supplies Administration Sergey Urvachev, the implementation of the interactive map helps bring negligent owners under control and involve idle lands into production: “We have begun land digitalization in 2018. Our farming enterprises are actively developing and are ready to take more lands to use them in their productions, but we also have a lot of negligent owners, who abandoned their lands for this or that reason. We used to spend much time on revealing such owners through different authority channels. Using the interactive device, which contains databases of Rosreestr, we now know the owner of every field, and have forwarded about one hundred materials to the appropriate authorities, which are responsible for the municipality supervision. As a result, about 80% of the owners are leasing or selling their lands, or handing them over to municipalities.”

Apart from the subsidy on development and implementation of digital technologies aiming at rational use of agricultural lands, the local budgets for the works on land digitalization will be able to attract regional subsidies on advisory support with regard to the issues on development of agricultural production (the total volume of the 2018 subsidies amounted to 8 mln. roubles, and the same amount is planned to be spent in 2019). The work on digitalization of agricultural lands may be carried out within the frameworks of performing research-and-development works under contracts with agricultural enterprises, for which regional subsidies are also being allotted.