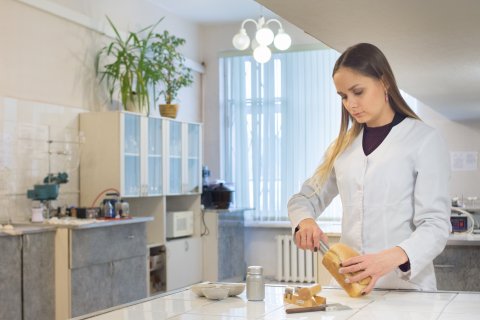 Researchers from South Ural State University have patented a unique method of producing fucoidan-based bread and with antistress, antioxidant and anticancer properties. Effective as prophylactic treatment of stress disorders, the bread is ready for mass production.

Over the recent years, researchers at the School of Medical Biology (SUSU) have patented over ten methods of producing modified foods, full of health benefits and effective in reducing anxiety and preventing a variety of diseases, including cancer.

“We thought it would be a good idea to focus on bread as it is a mass market product. Fucoidan, a polysaccharide generated in brown algae and some species of echinoderms, became the main functional ingredient. It has antioxidant and anti-infective properties, boosts the immune system and slows down the ageing processes,” shares one of the patent’s authors and Head of the SUSU Department of Food and Biotechnology, Doctor of Science (Engineering), Professor Irina Potoroko.

Together with other negative factors, environmental pollution, frequent and severe stress, and unhealthy diet result in certain disorders related to the accumulation of reactive oxygen intermediates (free radicals). This is called oxidative stress. Free radicals trigger a number of adverse chemical reactions in the body, damaging cell membranes, oxidising molecules of DNA, RNA, proteins, and phospholipids, and ultimately leading to mutations or death of cells, which results in many diseases (from cancer to cardiovascular diseases). Fucoidan, rich in antioxidant properties, is capable of neutralising free radicals in the human body and facilitate the prevention of oxidative stress and its related diseases.

Fucoidan-based bread will be produced from a mixture of wheat and rye flour. Currently, the SUSU researchers are working at developing bakery foods with other healthy supplements — vegetable extracts (from shelf fungus and larch) that have antioxidant and immunostimulating properties.

The researchers are thinking about producing a variety of healthy foods. They have already patented the production of unique beverages from apple, beetroot, honeysuckle, carrot, and sea buckthorn juices. Their mass production is soon to be started.