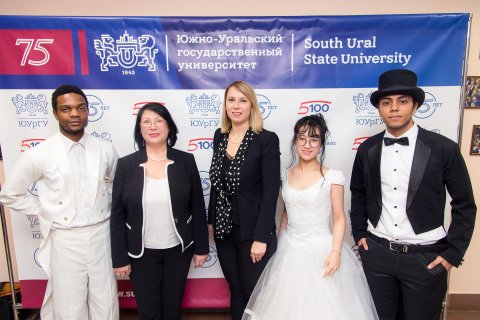 South Ural State University keeps confidently expanding the boundaries of its international collaboration, and strengthening its positions at the world’s scientific and educational arena. As part of the celebrations of the 75th Anniversary of one of the leading Russian universities, a presentation of a big-scale project, the SUSU’s Pushkin Institute centres network, was held.

The project was fulfilled by the Pushkin Institute Research, Education and Coordination Centre, Department of Russian as a Foreign Language, Department of International Relations and Regional Studies of the Institute of Linguistics and International Communications, jointly with the Institute of Open and Distance Education, Department of Information-measuring Equipment of the School of Electrical Engineering and Computer Science, and the Marketing and Strategic Communications Department. Over the period of several years the Pushkin Institute Centre has organised many events aiming at popularising the Russian language and culture abroad. Special distance education academic programmes were developed, advanced training courses for teachers were held, as well as various courses for students from China. Massive Online Open Courses for students from the People’s Republic of China and Arabic countries were elaborated, as well as virtual class programs with a system of speech samples processing, and those for a humanoid robot, which helps the SUSU specialists work with international students.

“The collaboration between South Ural State University and the People’s Republic of China began quite a while ago. By the present moment we have signed 45 Collaboration Agreements with the leading universities in China. Over 300 students from China are studying here under the main academic programmes, and about 100 people are attending the courses at our Faculty of Pre-University Education. Opening of the Pushkin Institute centres network is an ambitious project, which aims at the Russian language popularisation. Russian language is in high demand among the universities in China, so their joining the partner network will provide a unique opportunity to study Russian and to learn more about the Russian culture. This opens new prospects for collaboration with SUSU with regard to offering education to students from China, advanced training to teachers, and interaction in many other fields,” shared Olga Yaroshenko, SUSU Vice-Rector for International Relations.

The project is being fulfilled within a grant from the Russian Federation Department of Education. In 2018 SUSU earned a subsidy for fulfilling the events aiming at full functioning and development of the Russian language. The goal of the programme includes promoting the national language of Russia at the world’s educational space, forming a positive image of our country, and improving its international standing. SUSU opened 9 centres in the universities in China. Head of the SUSU Department of International Relations and Regional Studies Liudmila Shestakova became the project coordinator and explained how the idea of creating the partner network had come into being, and what are the specific features of it.

“Originally we wished to unite all the partners of our university in foreign countries and render them assistance with regard to teaching the Russian language. The Pushkin Institute centres network implies development of the forms of distance education. We offer ample resources to our partners, which we have elaborated to support the process of online training. Moreover, we hold master classes and webinars, and train specialists in Russian as a Foreign Language who will be working at our centres.”

The project presentation was a special event held as part of the SUSU 75th Anniversary celebrations. It was attended by the representatives of our partner universities from China, as well as of the Ministry of Education and Science of the Chelyabinsk Region. The multi-aspect work being carried out by the university specialists is important since it contributes not only to the university development, but also to the international relations between our region and the People’s Republic of China.

“Today the international activity is one of the priority fields in education, and such brilliant big-scale development of the Pushkin Institute centres network is significant not only for the university, but for the Chelyabinsk Region as well. The promotion of the SUSU’s Pushkin Institute network is an indicator of the level of the university’s international collaboration. Such projects boost the flow of international students into our region,” stressed leading specialist of the Ministry of Education and Science of the Chelyabinsk Region Anna Bukhtoyarova.

Video greetings and feedback by the international academics and students participating in the events of the SUSU’s Pushkin Institute Centre were also demonstrated. On the occasion of this presentation, students of the Institute of Linguistics and International Communications prepared a literary-musical performance inspired by Pushkin salon: girls and boys from China, Zimbabwe, Egypt and Russia recited poems by Alexander Pushkin and danced in ballroom gowns. 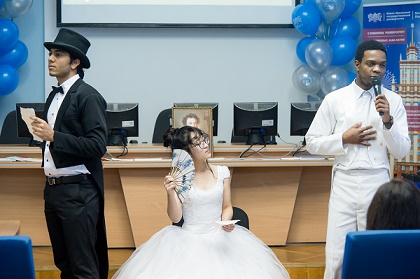 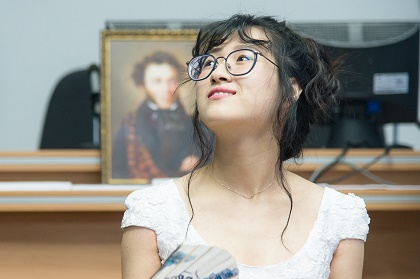 At present the Pushkin Institute Centre continues to hold events within the awarded grant: a second round has started for the Olympiad on Russian as a Foreign Language, the student photocontest is close to a wrap up, and the results of the advanced course on using of electronic technologies will be announced very soon. For details, please visit the portal of the SUSU’s Pushkin Institute partner network, which was specially created as part of the project.