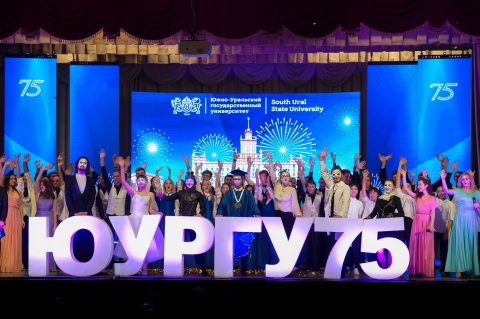 The celebratory week dedicated to the 75th Anniversary from the day of the university’s foundation finished at South Ural State University. Celebratory programme was very eventful and reflected the university’s storied history, as well as cultural and sport traditions. Within five days, the university vibrantly demonstrated achievements of its schools and institutes and presented its scientific, innovative and multi-aspect international activities, arts and sports. The final day of the Anniversary celebration was dedicated to celebratory greetings for the university from authorities, rectors of Russian universities and representatives of education.

At a ceremonial reception of official delegations, the Rector of SUSU Aleksandr Shestakov greeted the university’s guests:

“SUSU is celebrating its 75th anniversary. This is a very important milestone in our university’s development. This day, we can look back and assess everything that has been done within 75 years both by our predecessors, who had been establishing and developing the university during the Soviet times, and by us at the present time. We look forward into the future. Our goal right now is to be a university which develops economics, science and education not just in the Chelyabinsk Region and the Ural, but in Russia in general. We cooperate not only with Russian enterprises, but also with leading international companies of the hi-tech sphere. We see our mission in development of all these directions. I am grateful to all who have come here today to congratulate the university on its Anniversary.” 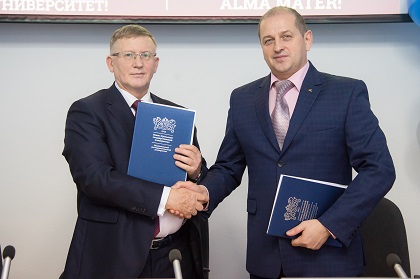 SUSU is making a serious contribution to development of education at the South Ural, as noted by Deputy Minister of Education and Science of the Chelyabinsk Region Elena Zayko:

“75 years is a colossal period. SUSU is one of the leading universities not just in our region, but in Russia as a whole. This is a university which is constantly developing, especially in the field of innovations. At that, these processes are covering not only academic and teaching staff but also, of course, studentship. The vast experience of cooperation with international companies proofs that specialists who graduate from SUSU are in-demand both in Russia and abroad. This is a quality mark. First of all, I would like to wish the university’s leadership, academic and teaching staff, students and specialists, well-being and success!”

“Our partnership started 4 years ago, but we are already amazed at the growth that has occurred at SUSU within this time. The university is simply developing before our eyes. We are especially amazed at how excellently the work is organised at the university, for which of course we should give credit to Aleksandr Shestakov. We are sure that our cooperation with SUSU will bring important results not only in science, but also in education as a whole in the future.” 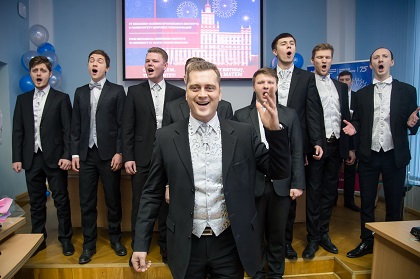 A graduate of Chelyabinsk Polytechnic Institute, Deputy Governor of the Chelyabinsk Region Oleg Klimov underlined the SUSU contribution into his career:

“SUSU is my Alma Mater. I graduated from the Faculty of Civil Engineering in 1977. I believe that this university provides a fundamental engineering education, which helped me personally, of course, and all my acquaintances, friends and colleagues a lot to achieve the results in life and do something worthy. In my opinion, SUSU is one of the leading universities in Russia. Young graduates of SUSU, with whom I meet, are very competent. They are real professionals. I wish our university to keep being an advanced institution, to prosper and continue preparing the best specialists.”

The festive events on the occasion of the 75th Anniversary of South Ural State University closed with a gala concert, at which Governor of the Chelyabinsk Region Boris Dubrovsky addressed the guests of the university:

“There was a time when Chelyabinsk Polytechnic Institute provided the post-war industry in the region with young specialists, played a key role in the fundamental reconstruction of the Soviet enterprises, and created new technologies for mechanical engineering, metallurgy, and construction. This experience of innovative work allowed the institute to become a national research university, a powerful educational corporation, and a core university of the South Urals in the 21st century. Today, SUSU successfully competes with leading universities in our country and strengthens its position in the framework of Project 5 - 100. It has become an integral part of the world’s educational system by teaching foreign students and participating in international exchange programmes. Like 75 years ago, SUSU is sensitive to the time and develops precisely those fields that are on message not only today, but tomorrow, as well. I wish the leading university of the Chelyabinsk Region successful development and prosperity.” It is worth mentioning that the Anniversary week of South Ural State University was full of significant events.

Thus, Governor of the Chelyabinsk Region Boris Dubrovsky took part in the opening of Quantorium Children's Technology Park at SUSU. Working on modern equipment will allow to teach necessary skills to the future engineers.

In the SUSU Activity Hall, a special meeting and a concert were held, after which everyone could taste an impressive Anniversary cake. Beautiful firework became a bright closure of the 75th Anniversary celebrations. In addition, it should be said that every day at 22:00, starting from December 10th, the Chelyabinsk residents and guests of the city could be witnessing a flashmob dedicated to the Anniversary of SUSU. Today will be no exception, and the number 75 will again light up in the windows of the Main University Building.

Starting from December 10th, the university held daily unique events dedicated to its Anniversary. Thus, the honouring of the university began with the SUSU, a Bridge between the Present and the Future photo exhibition. The pictures show the stages of the historical development of the university. Rector of SUSU Alexandr Shestakov took part in the opening ceremony of the gallery.

“For a university, 75 years is a young age, but what SUSU has become over this time indicates that it has always been meeting the demands of the times. Our university is the leader in the field of Industry 4.0 in our country. On September 1st, we will launch the Master’s programme in digital industry – the first and the only one in the Russian Federation. Our main task today is to become an international university. I am proud of SUSU, and I am grateful to the people who worked here, and those who work here now. I am sure that we will only keep moving forward!” said Alexandr Shestakov. To honour the international students of the university, an art installation was created in the form of three-dimensional “ЮУрГУ” (SUSU) letters with pictures of the flags of all the countries these students have come from.

In the university Activity Hall the most talented SUSU student was announced as part of the Campus Mister contest. The title was awarded to a representative of Dormitory No.7.1 Maksim Arslambekov.

The memorial plate was installed in honour of Professor Aleksandr Poletsky, who had made a significant contribution into development of Chelyabinsk Polytechnic Institute.

Pilot testing of a lean production plant was held the SUSU School of Economics and Management, an ILIC International Fest language festival was organised by the Institute of Linguistics and International Communications, and an open scientific workshop on EECS: Education and Science for Industry 4.0 was held at School of Electrical Engineering and Computer Science. On the main stage of SUSU a forum was held for the winners of Zvezda (Star) Multidisciplinary Engineering Olympiad, which is annually organised by the university. To close the second day of the Anniversary week, the Rector held special meetings with the university’s veterans and academic dynasties.

On the third day of the celebrations the SUSU Rector took part in the opening ceremony of the exhibition of achievements in research and engineering From Chelyabinsk Mechanical Engineering Institute to the University of Global Digital Transformations, where the latest innovations by the university researchers were presented. Moreover, a unique functional materials laboratory was opened, and Doctor of Sciences (Physics and Mathematics) Sergey Taskaev was appointed to head it.

A Science and Innovations at SUSU tele-marathon was broadcasted by SUSU-TV Television and Radio Company, and was devoted to achievements of the university’s researchers and prospective fields of development within Project 5-100.

The SUSU Leaders 2018 photo gallery opened at the university Scientific Library. A project on the History of South Urals: from the Ancient Times through the End of the 20th Century was presented.

I Love SUSU brand studio was opened, where SUSU students and staff can buy everything they need for work and study, from stationary to electronics, with the university’s logo.

A 75th Anniversary of SUSU: Golden Pages book was presented, which describes the history of the university, its main milestones, and most significant achievements. Also an international interuniversity project on Multi-purpose Journalism: Project-based Learning Experience was presented. This is a unique study guide, prepared under the editorship of Dean of the Faculty of Journalism Liudmila Shesterkina.

A presentation Eurasia in the Ancient Times, held in the Pushkin Hall on the research by SUSU archaeologists and foreign researchers, showed the results of joint projects by the university researchers and their colleagues from Hungary, Germany, Sweden, and the USA.