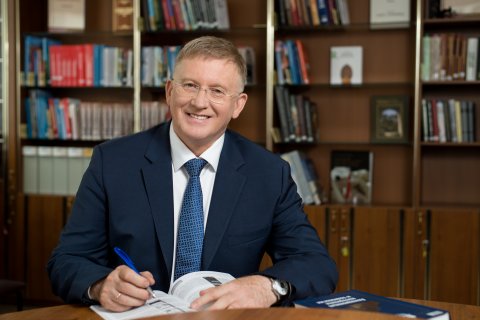 South Ural State University celebrates its 75th Anniversary. On its background is a glorious and eventful history; ahead of it are digital transformations. Today, the university is confidently stepping up to the international level and improves its positions in prestigious global and national rankings. SUSU aspires to take its rightful place in the global educational space. Rector of South Ural State University, Doctor of Sciences (Engineering), Professor Aleksandr Shestakov talked about the ways this task is being fulfilled:

– Mr. Shestakov, what scientific breakthroughs took place at the university over three quarters of a century?

– If we consider the 75-year history of the university’s development, one can see that its main achievement is in the fact that over its entire history the university has always answered the time’s calls. It has always been on the frontline of events, has always been responsive to our country’s demands and successfully worked in these directions.

During the war time, all tank-production factories happened to be located in the Ural region. Stalingrad Mechanical Institute was evacuated to Chelyabinsk, where in 1943 it became the basis of Chelyabinsk Mechanical Engineering Institute. Workers were needed to produce defence enginery, first of all – tanks. Our university started training such workers in accordance with the times’ need right away.

It was in 1944 already that research on heavy armour welding to improve tanks’ characteristics started. Thereafter, the first Head of the Department of Tanks became triple (!) Hero of Socialist Labour. Back then, the university already had professors, doctors of sciences and leading associate professors who were highly trained specialists. The bar was set very high from the very beginning. Approaches of highly-trained specialists that were used back then are still relevant.

The next period regards post-war history. In 1950s, Chelyabinsk Polytechnic Institute established seven engineering faculties: from the Faculty of Aerospace Engineering to the Faculty of Automatics and Mechanics. They were needed so that the country could augment its industrial and defensive potential after the war. The university was successfully fulfilling this task as well. 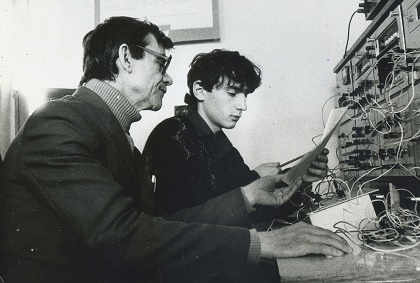 Moreover, 12 sector-specific and fundamental research laboratories were established. Government funding, as well as job positions for engineers and research fellows were provided. The Soviet Union supported establishment of large-scale laboratories as their research fellows carried out very serious development works; they also attracted specialists to complete defence and other big-scale orders. This as well was a very important component for development of the Polytechnic Institute. In the laboratories, research of the global level was carried out and training of employees of top- level qualification was performed. Each of the laboratories had several dozens of workers. In particular, the Laboratory of Computer-Aided Control Systems, in which I was being trained, had 70 people working there. Dynamic test beds of computer-aided control systems, which were distributed to practically all rocket and space companies of our country, came to existence as a result of this activity.

The Laboratory of Rolling, headed by Professor Vydrin, was developing new technologies; licenses were sold abroad – to Japan and Czechoslovakia. These were the results of intellectual labour. It was like this in all 12 laboratories, which had been operating at the university back then. Once again, the Polytechnic Institute corresponded with the needs of the time. It trained employees not only for the Chelyabinsk Region – they were allocated throughout the Soviet Union. Our alumni worked in every corner of the country.

The next stage was Chelyabinsk State Technical University. The period of its establishment was very important as well, as engineering specialties were being developed. Fundamental research became topical; physics and mathematics got intensively developed. This was a significant step, necessary for manufacture of flawless equipment in our country.

During the time of reformation, South Ural State University became a multi-purpose higher education institution. On the one hand, it accumulated many specialties of the humanitarian sphere (our country needed economists, accountants, lawyers; a big number of small innovative enterprises were being created; own businesses were coming into existence). But at the same time, the university was developing natural sciences as well. New faculties were established. Nowadays, the multi-purpose character of the higher education institution is very important in order to complete big-scale interdisciplinary projects. We have everything for this.

– In your opinion, which scientific breakthrough is the main one? Supercomputer?

– I think so. The university started developing in this direction in 2000. Today we have one of the biggest supercomputers in the Russian Federation. Moreover, we perform training of personnel who are capable of operating this machinery. Supercomputer is a very important component. This is a movement towards development of natural sciences, as simulation of various physical processes and phenomena, which our scientists are working on, is necessary. Besides, mathematical simulation is a tool for accelerated obtainment of high characteristics of technologies, devices and systems.

– The university is implementing the strategy of digital transformations. What has already been done? What is planned to be done?

– We started working in digital industry even before it became the topic of all talks in our country. This is the result of our interaction with Emerson corporation – the world’s leader in the field of automation. Upon an order from the corporation, we implemented two projects on development of digital twins. We supplied an operating station to Emerson’s engineers, which allowed to use a digital twin for improvement of the vortex acoustic flowmeter. Digital twin of the pressure sensor allowed to enhance the characteristics of this device as well. 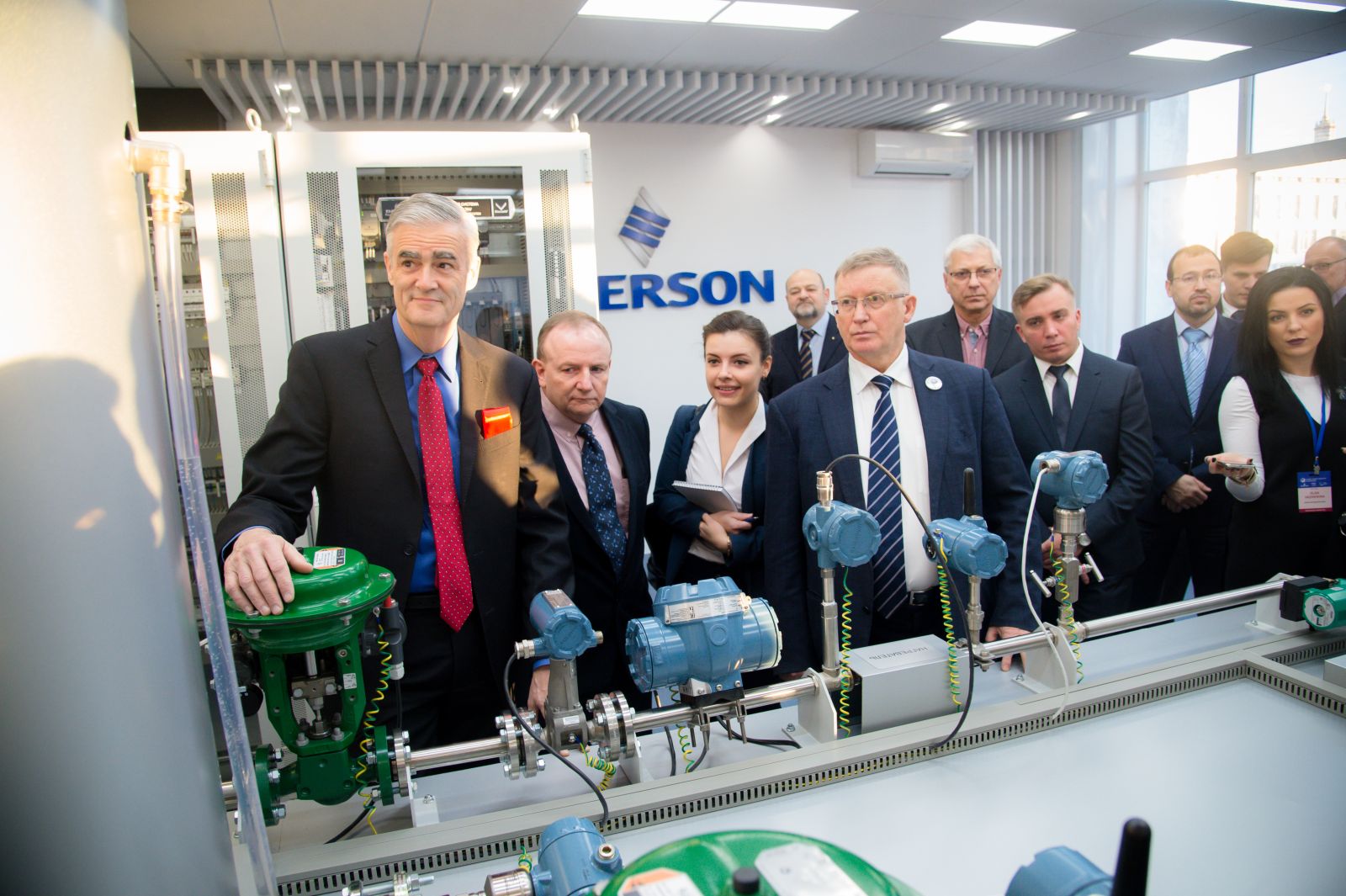 As a result of our work with Emerson corporation the Chelyabinsk Region received big investments from this foreign company. The first stage of its plant was built and put into operation by the corporation in 2015. Now the second stage is being designed, and the facility is planned to be commissioned in May of 2019, and it will be a production of the highest technological setup. Meanwhile, the majority of the workers of the plant and the global engineering centre, which was created, are the alumni of our university. This is a unique experience within the scale of our country. The corporation also made investments into SUSU. The first digital industry laboratory received $500,000 of funding, and the second one - $100,000. We will keep developing these laboratories.

– What new approaches, innovative models and technologies can the university provide for transition to Industry 4.0?

– First of all, let us get things straight with what Industry 4.0 means? The first aspect is the necessity of assessing the equipment condition, and performing measurements using various sensors. This is of the main new approaches of digital industry, something what has not been done before. Today we are fulfilling a big project at the rolling plant of Magnitogorsk Iron & Steel Works.

For you to make it clear, I will give a comparison. A cardiac monitor is tracking the status of cardiovascular system over the 24-hour period. So, something like that occurs in industry as well, only with regard to equipment. Meanwhile, data is decoded in a real-time mode.

The second approach is the creation of digital twins. I am talking about a physical-and-mathematical model of some device which depicts the processes underway. The sensor equipment is installed at a real facility, information is in-put, and this digital twin is used to assess the efficiency of work, the condition of the facility, and the chances of an accident occurring. We are beginning to engineer such digital twins for the power generation sector as well. On the one hand, we made these to assess the condition and efficiency, of a turbine for instance, and in the other hand – to train the personnel. Using the augmented reality and a digital twin the workers can learn how to properly operate complicated facilities.

The third and very important aspect of digital industry is energy saving. To come up with engineering solutions, you will also need to use sensor equipment, do collection and processing of information, and consequently, control power generation facilities in terms of energy efficiency. That is also something we are dealing with. We are performing a set of serious tasks jointly with Magnitogorsk Iron & Steel Works. The specialists of our university are doing international projects related to improving the efficiency of big servicing units. Digital industry means processing of big amounts of data in the real-time mode. While the system of data collection should be wireless. This is yet another trend of the digital industry of today, and we are also working in this field.

‒ SUSU has recently hosted a big international Global Smart Industry Conference, where the leading professors from many countries of Europe and Asia took part. What are the main results of that conference?

– When at one time we started moving towards the field of digital industry, we began searching for partners to create systems. And Magnitogorsk Iron & Steel Works became one of such partners. A conference on digital industry has been held in Russia for the first time. Together with the top management of Emerson we came up with an idea of it, and it took a whole year to complete all the preparations. The Emerson corporation president and vice presidents for innovations paid visits to SUSU and shared on the status and prospects of development of this field. The world’s leading professors gathered here. We opened a new teaching laboratory on digital industry.

A representative of the Ministry of Digital Development, Communications and Mass Media attended the global forum. The Moscow authorities showed interest in the experience of our collaboration with the plant. We discussed this issue at the meeting with the Deputy Minister. It was suggested to submit the joint projects to the Ministry. Their fulfilment will become grounds for creating the government system for supporting digital industry. I think this is a very serious result.

— Was there anything that the forum participant were surprised with? In which scientific fields, do you believe, we excel, as compared to many other countries of the world?

– A variety of different presentations were delivered at the forum. The presentations by our researchers were based on their experience obtained in the field of digital industry. In our conversations the foreign professors noted that the university’s status with regard to serious works in this field is very good. In terms of data processing we have reached the world’s level, and there is no doubt about it. I mean here the information systems, fundamental computer science, the faculty of mechanics and mathematics… – today our specialists are capable of performing works on big data processing and evaluation at an international level.

– And in which fields do we lag behind?

– I wouldn’t put it that way, in such a radical manner. We are at the start with regard to the field of digital twins. This sector is only beginning to be developed around the world, and we have set ourselves the task to fill this niche in our country. The multi-purpose character of SUSU will again be of help here. Specialists of various fields, whom we will join into teams, will be able to solve this task.

In many foreign universities the issues related to real industry and real technologies remain open pretty often. An academic approach and an industrial approach are often two different things. As I see it, the advantage of our university is and will continue to be in the fact that we are working in close relation to industry, which is the consumer of new digital technologies. This advantage of ours has emerged from the whole 75-year history of our university. We never stop at what we have achieved. We are planning on new stages of our intensive development. We are not only carefully looking into the future, but we are confidently moving forward.