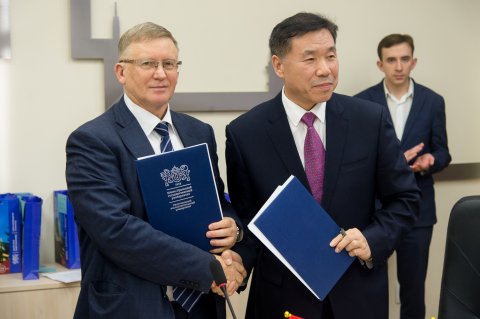 Over its long history, South Ural State University has become a truly multinational university – students from 52 countries near and far study here. On December 13th, as part of the celebration of SUSU’s 75th Anniversary, events dedicated to the university’s international activities were held.

The first of the events was the opening of the I Love SUSU brand studio, where SUSU students and staff can buy everything they need for work and study, from stationary to electronics, with the university’s logo. Rector Aleksandr Shestakov, who became the first customer at the university’s store, participated in the opening ceremony.

“We have been planning on doing something like this for a long time, but I didn’t think that the brand studio would turn out so stylish and beautiful. We needed a way to spread products with the university’s logo among teachers and students. This is one more fantastic event of the Anniversary week at our university. Today I bought a phone charger here. I go on business trips very often, and this is something I need on the road. I saw it here, so of course I bought it!” said Aleksandr Shestakov, sharing his impressions.

The brand store puts an emphasis the university’s multinational character. Opening a brand studio does not just make many products more available for students and teachers, but selling products with the university’s logo also helps popularise SUSU. 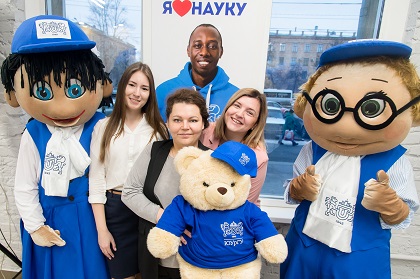 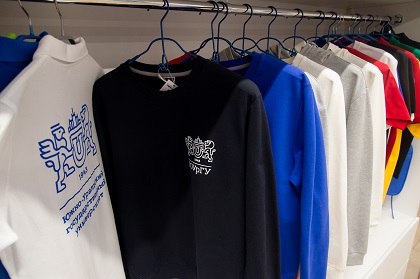 “The partnership between SUSU and Chinese universities began long ago. We have 45 partnership contracts with the leading universities in China. More than 300 students from China are studying under the university’s main academic programmes. Opening a network of the Pushkin Institute centres is an ambitious project of our university. It opens new prospects for collaboration,” noted Olga Yaroshenko, Vice-Rector for International Relations. Within the grant, the SUSU Pushkin Institute centre holds many events for students and academics from China. The multifaceted work by the university specialists is not just important for the university’s development, it also contributes to the international relations between the Chelyabinsk Region and China.

“International work is one of the highest priorities in education today. The lively, big-scale development of the Pushkin Institute centres network is significant for the university and for all of the Chelyabinsk Region. Promotion of the SUSU Pushkin Institute network is an indicator of the development of the international cooperation of the university and the region as a whole. Such projects contribute to increasing the flow of foreign students in to the region,” stressed lead specialist of the Ministry of Education and Science of the Chelyabinsk Region Anna Bukhtoyarova.

Another event within the celebration of the university’s Anniversary was the opening ceremony of the second stage of the Mechanics, Laser Processes, and Digital Production Technologies Laboratory. The laboratory was opened by Vice President of the Technical Services division of SMS Group Pino Teze, who is also Professor Emeritus at SUSU.

“SMS Group is a world leader in the manufacture of equipment for metallurgical production. We have been working with South Ural State University for 10 years already. We have found in SUSU a partner who helps us promote technologies for the industrial sector. I’m sure that the joint investments of SMS Group and SUSU into the development of such technologies will give us an advantage and help expand the horizons of our knowledge and their application.” A 75th Anniversary of SUSU: Golden Pages book was released in honour of the university’s Anniversary. It describes the history of the university, its main milestones, the most significant achievements, and the current state of the university. Several pages are dedicated to outstanding alumni, who were guests of the presentation. Among them, Deputy Chairman of the Board at OAO Chelyabinvestbank Dmitriy Piskunov:

“As a graduate of this university and representative of Chelyabinvestbank, I am proud that there is a page about us in this publication, and in previous publications as well. We have been partnering with South Ural State University for more than a quarter of a century. Over all these years, our partnership has been very fruitful and efficient, and we’re very proud of the trust the university puts in us.” An international interuniversity project on Multi-purpose Journalism: Project-based Learning Experience was presented at SUSU. This is a unique book, prepared under the editorship of Dean of the Faculty of Journalism Liudmila Shesterkina.

“Project-based learning is a modern model of education which breaks stereotypes and pushes the boundaries of traditional practice,” noted Lyudmila Shesterkina. “This is a specially-planned academic activity, where pieces of knowledge from various fields are not studied separately, but rather interact with one another. The goal of this academic project is providing practical study of an important topic and solving a problem in a certain period of time.” A presentation Eurasia in the Ancient Times, held in the Pushkin Hall on the research by SUSU archaeologists and foreign researchers, showed the results of joint projects by the university researchers and their colleagues from Hungary, Germany, Sweden, and the USA. A large number of projects are being fulfilled in Kazakhstan.

“We are currently involved in a project on the study of monuments from the early Middle Ages in Western Kazakhstan. We are interested in this territory because it connects Central Asia, especially the oases of Uzbekistan, Kyrgyzstan, Tajikistan, with the Ural Region. Trade routes, communications, and cultural interactions happened on this path. We are interested in finding out what traces have been left by these connections, and what kind of the manifestations of them there were. We expect that next year we will begin field work in this territory,” said Director of the SUSU Eurasian Studies Research and Education Centre Aleksandr Tairov, sharing his plans.

On the same day, Rector held a welcome reception ceremony for foreign delegations. The representatives of 10 partner universities took part in the meeting. The guests came from China, Bulgaria, Tajikistan, Kazakhstan, Great Britain, and South Korea. Vice-Rector of Harbin Institute of Technology Ren Nanqi, who is also the Executive Director of the Association of Sino-Russian Technical Universities [Ed. Note: SUSU is a member of ASRTU], spoke about the prospects of partnering with the leading university of the South Ural region.

“We value our friendship with SUSU because the fields of engineering are strong here. SUSU’s development process is very fast, we were able to see this personally: today we attended an excursion, and we were impressed by the university’s laboratories, where world-class research can be conducted. We are really hoping to strengthen the partnership with SUSU within the Association of Sino-Russian Technical Universities in our fields of joint research.” An important guest of this meeting was Michael Charles Caruana, Strategic Solutions Director of the influential rankings agency THE, with which SUSU has been partnering since 2017.

“I’m very grateful for the personal invitation to participate in the university’s Anniversary. During the first meeting in September of last year I saw the aspirations that SUSU has, and the university has a serious foundation to fulfil them. South Ural State University is on the right path. I’m sure that your goals will become a reality, and your presence in the international academic and research arena will become even more important.”

“We are creating the Alumni Association, which will become the base of communications between the university and its alumni in the future. It’s great that students do not lose their connection with the university after graduating, but constantly getting in touch with their teachers, and this is some sort of a binding thread between the graduates and the university.” “This is quite a big festival. Students from schools, universities, colleges, and other organisations in Chelyabinsk take part in it. People from all corners of the capital of the South Ural region come to visit. The festival is bright and beautiful. The students of our Department can learn a lot here, and today they participated as judges,” noted Director of the Institute of Sport, Tourism, and Service Vadim Ehrlich.

The fourth day of the celebrations ended with a meeting between the members of the International Scientific Council.