“A Bridge between the Present and the Future”: Celebration of SUSU’s 75th Anniversary has Started 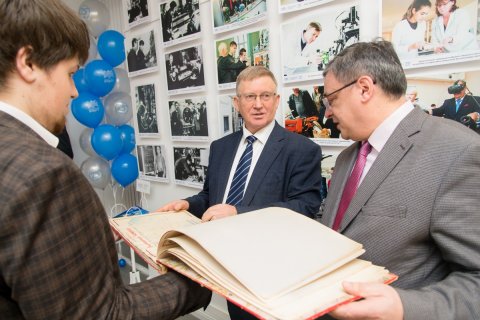 South Ural State University is a dynamically developing university which is rightfully considered to be one of the leading higher education institutions in Russia. December 15 is the 75th anniversary from the day of the university’s foundation, and first celebratory events which reflected eventful history as well as cultural and sport traditions of the university started today.

Celebration in honour of the university started with a photo exhibition entitled “SUSU – A Bridge between the Present and the Future”. Photos showed stages of the university’s historical development from CMEI to SUSU as well as its research and innovative activity, education process, outstanding scientists, social, cultural and sport events of former and today’s students. Aleksandr Shestakov took part in the ceremony of opening the historical gallery. He talked of how the university has changed during the time he acted as SUSU Rector. “By 2005, within the post-reformation period, SUSU became a universal education institution and started performing training of not only engineers but also economists, lawyers and specialists of other spheres; this is when development of programmes in natural sciences started. Overall, 250 thousands of specialists graduated from the university, and this is a quite serious number for the comparatively short period. 75 years for a university is a young age, but the way SUSU evolved within this time proves that it has always been aligned with the times. What is important, SUSU is the country’s leader in the sphere of Industry 4.0. On September 1, we will launch a master’s degree programme on digital industry – the first and the only one in the Russian Federation. And nowadays, the main goal of the university is to become a truly international university. Today I feel proud for the university and am grateful to people who had been and are still working here; I feel confident that we are going to move forward,” noted Aleksandr Shestakov. 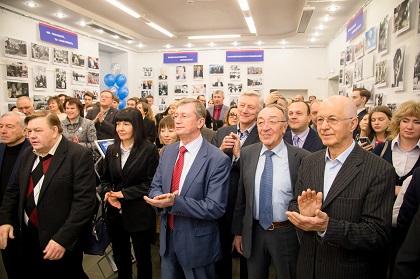 Museum and Education Complex of South Ural State University supervised by Nadezhda Ivanova made a great contribution not only to organising the exhibition but also to saving the memory about the past and the present of the university. The exhibition was organised using materials of the SUSU History Museum as well as modern photos taken by photographer of the Marketing and Strategic Communications Department, Oleg Igoshin.

The university’s history was reflected in a startup called “Digital History of SUSU” which was presented that day. This is a fragment of a global project of the Department of Russian and Foreign History, being implemented in the frameworks of project-based learning – the new educational technique introduced at the university in 2018-2019.

“This startup is part of a global project called “Public and Digital History” which is going to present history of the state, enterprises, the region, society and certain people. This is a strategy direction within our Institute and the University overall. “Digital History”, “Digital Art”, “Digital Coucher Culture” are the things that are trending nowadays because the world lives in such a format. Such work is very interesting for students as it corresponds with the way of mastering and translation of material that is relevant for them. This is a piece of puzzle that is going to become a big picture,” commented Director of the Institute of Social Sciences and Humanities, Professor Elena Ponomareva.

Digital History of SUSU is a special platform at the university’s website. It presents historical documents and archive photos and videos, many of which were not available for public use.

“Within this project we are presenting virtual history of SUSU since the moment of its foundation and up until today. We are planning to keep developing this university history project, adding new facts to it, new data, and new stories in an interactive format. One can see all the university rectors here, starting from the times when SUSU was a Chelyabinsk Mechanical Engineering Institute and Chelyabinsk Polytechnic Institute, can take a look at the documents laid in the university’s foundation, as well as the albums made by the first graduates of the university…Information that has been collected by the SUSU Museum will become available to everyone today,” shares Head of the Department of Russian and International History Olga Nikonova.

Dean of the Faculty of History of the SUSU Institute of Social Sciences and Humanities Igor Sibiriakov stressed the importance of this project:

“SUSU holds a special place in the system of education not only within the scale of the South Ural region, but already back in the times of the Soviet Union it was listed among major polytechnic institutes and was shaping the engineering elite of our country. We’re still fulfilling this mission of ours. The university is developing to comply with the trends and processes of the modern world. One of such processes is globalisation. And “digitalisation”, which is a fancy word of today, of many of the educational technologies and research technologies allows us to comply with these processes. This project helps make our university recognisable not only in our region or in our country, but on the global scale as well, and that’s our goal exactly.”

After the presentation each guest of the exhibition could leave a message for their descendants by the 100th Anniversary of the university by signing special postcards as part of the Take Memories as a Souvenir campaign. 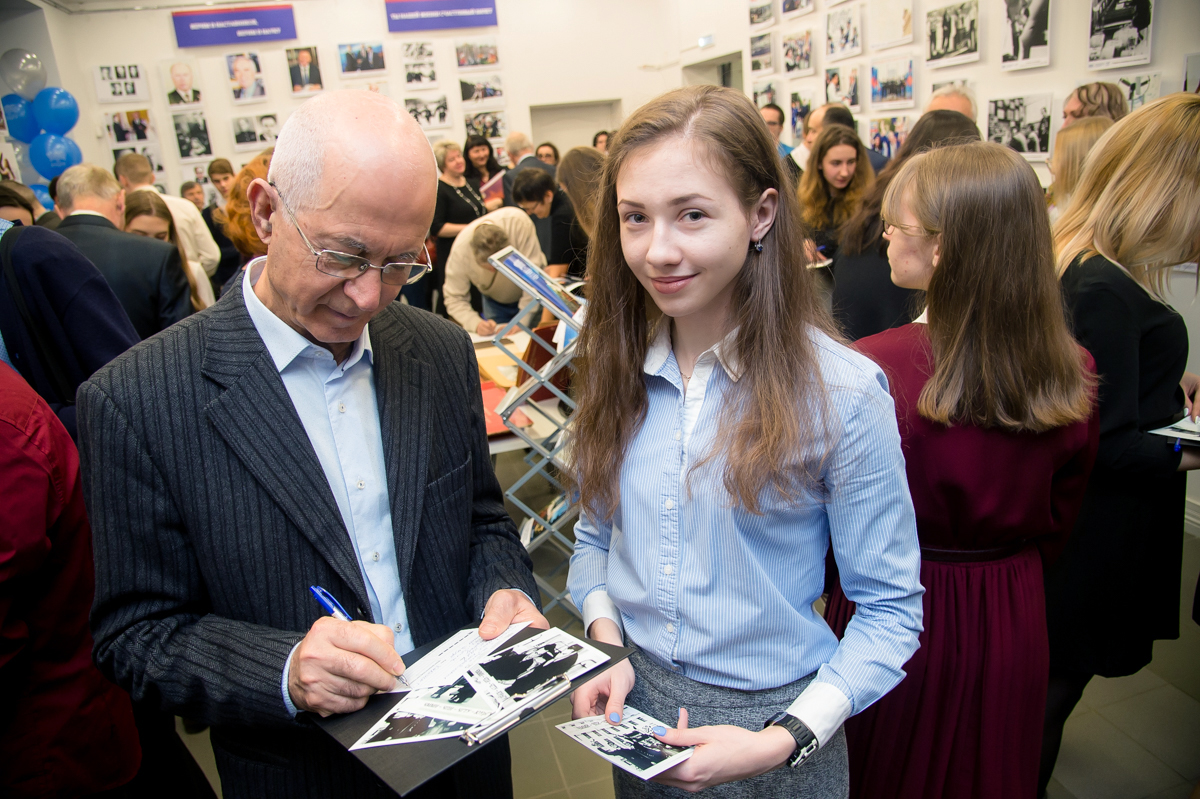 The Birthday of South Ural State University is not the only anniversary that is being celebrated this week. On December 10th an album presentation was held on the occasion of the 15th anniversary of SUSU Art Gallery and establishing of its collection of modern art. The Art Gallery’s academic advisor is Professor at the Department of Theology, Culture, and Arts, Doctor of Sciences (Art History) Natalya Parfentyeva. In the end of the event the album prepared to the 15th Anniversary of the Art Gallery was presented to SUSU Rector.

“Everything that has been created at the Art Gallery over these 15 years became part of the collection. More than 800 works of art were gathered, and today on the occasion of the SUSU’s Anniversary, we have presented the brightest, most vivid and picturesque ones. These works of art are priceless since they form a special cultural space, and they will be helping students understand what true art is. These works are very good indeed, and we believe we might have exhibited them in absolutely any museum.” Another exhibition, called From Design Students to the University, is also dedicated to art. The students demonstrated layout samples for a number of scientific literature by the university academics and for some children’s books, presented the created-by-them elements of trademark style for T-shirts, badges, mugs and other items, and the architecture designers presented their projects of urban environment.

“The exhibition aims at demonstrating the skills of our Department’s graduates. For instance, one of the stands shows identica. These are the elements of brand identity, which allow to instantly single out representatives of SUSU at various events. And these stands exhibit works by the Department’s students who made layouts for scientific papers, game books, and children’s literature. Our university is the only one in our city which offers to teach such skills. This work is quite difficult as it deals with polygraphy, printing work, colour reproduction, and other nuances. Moreover, miniature buildings are also presented at the exhibition. Small towns across our region show interest in forming their individual images, and we’re working on it with Yuzhnouralsk and Chebarkul,” shared Associate Professor of the Department of Department of Design and Visual Arts Larisa Surina.

In honour of all foreign students who study at the university, Extracurricular Activities Department together with International Office created an object d’art– three-dimensional letters “SUSU” with flags of all our foreign students’ states, from which they came to us. The flashmob took place in the hall of the second floor of SUSU. Vyacheslav Burmatov, Vice-Rector for Student Affairs, welcomed the guests of the event.

“Today I am glad to see everyone here at the opening of the object d’art. Our university is multinational; therefore, a large number of events are planned for the anniversary week, which are also devoted to foreign students.” President of Association of International Students of the Southern Urals, Uvindu Wijeweera, came to study at SUSU from Sri Lanka. He shared his impressions after presenting his country in a flashmob.

“I, like any foreign student, live far away from home. However, SUSU allows feeling comfortable here. When I see my flag at the university, I am very proud of it, I begin to remember my house. SUSU is the right place not only for me but also for all foreign students. Today everyone is happy to hold their flags and take photos, this is a great honour. I think I will remember this day all my life and, perhaps, to the 100th anniversary of SUSU, I will stand here with my children and show them this object d’art and our flag on it.”

After the flashmob, everyone had the opportunity to make a memorable photo with a new object d’art. An important event in the series of celebrations was the hockey game “Stars of Tractor” — “Stars of Polytechnic”. Stanislav Mosharov, a graduate of SUSU, Chairman of the Chelyabinsk City Duma, participated in the coaching staff of Polytechnic Ice Hockey Club.

“On this day, my favourite teams met in honour of the 75th anniversary of the beloved university. I used to train in Tractor Ice Hockey School, but I spent more than twenty seasons in Polytechnic team, and today I play for the team of veterans of this club. SUSU gave me a lot for life and in many respects determined the further fate. It was here that I met people with whom I communicate, make friends and work now. I always remember about my student years with great pleasure. I am pleased to be here at this meeting and see the beautiful hockey.”

Coach of Tractor Ice Hockey Club Andrei Mezin and Chief Coach of Polytechnic Ice Hockey Club and the World Champion of the University Hockey 2018 Artem Pletnev played on behalf of the student hockey club. Among “Stars of Tractor”, there were President of the Chelyabinsk Hockey Federation Andrei Kudinov, Honoured Coach of the Russian Federation, Director of Tractor Ice Hockey School Vyacheslav Ugryumov, Master of Sports of the international class Sergey Gomolyako and participant of the Olympic Games Sergey Yakovenko. The game was dynamic and bright, leaving the audience a lot of positive impressions, and ended with a score of 5-4 in favour of “Stars of Tractor”. Among the solemn events of this day, a worthy place was taken by the student holiday — the final of Mister Campus Contest. This large-scale project includes workshops, photo shoots, preparatory stages and much more. At SUSU Activity Hall, they chose the most talented student of SUSU, living in the campus. It was Maxim Arslambekov, the representative of hostel number 7.1.

At the end of the holiday, the lettering “SUSU — 75 years” will flash on the main building of South Ural State University.