A Puddle for Professor? A SUSU Scientist Can Clean Water Bodies off Heavy Metals and Radioactive Elements 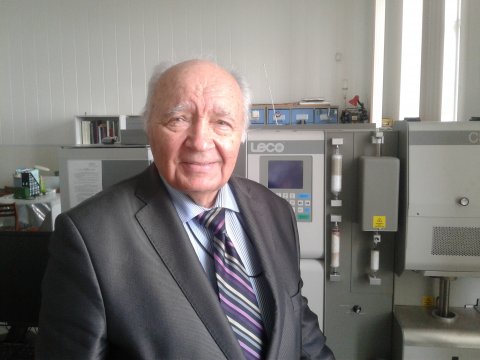 ...In his hands my interviewee holds some whitish granules, which look like fertilizers. It is a unique sorbing agent, an invention that took dozens of years to create. It has not been duly appreciated yet. But it may happen that these granules save our planet one day. The author of the invention is a SUSU Professor Gennady Mikhailov. Today we are talking to him about the most pressing problems of ecology.

Gennady Mikhailov was born in Chelyabinsk. In 1960 he graduated from Chelyabinsk Polytechnic Institute with honours. He is the Head of the Department of Materials Science, Physical and Chemical Properties of Materials, and senior research fellow at the SUSU Research and Innovation Services. His work experience in his speciality amounts to 58 years. Gennady Mikhailov is a Doctor of Sciences (Engineering), Professor, Hounoured Worker of Science of the Russian Federation, and Academician of the Academy of Sciences in Higher Education. He published 10 monographies, 2 study guides under the Academic Methodological Association, and about 500 articles in scientific journals and collected papers; he is also a holder of 12 invention certificates and 7 patents. Professor Mikhailov is a multiple-time awardee of orders and medals, including the Order of Honour  and Medal of the Order of Merit for the Fatherland of the 2nd class.

– What do you think, Professor Mikhailov: the humanity does not know how, or does not wish to interact with nature in a proper way?

– I couldn’t possibly speak for the whole humanity. But we may draw our conclusions, for instance, already from the single fact that people have allowed for a gigantic island of non-degradable polyethylene waste to form in the Pacific Ocean. Plastic components are being found grown into the tissues of the marine animals’ organs. But it’s not even the main issue. The thing is that solving of ecological problems means spending money on redeeming the sins of our past. That is, those of not even our past, but of other people and other companies. The economical structure of our country has changed, but the issue still remains topical: where to take the money from? We still have no answer to that, and this is a most serious misfortune! There exist good technologies, wonderful ideas, which could have helped in solving many of the ecological problems. But we need investments for that, so that we could profit from it. And… in the meantime the mankind ballasts down time-expired aircraft carriers and submarines in the world’s oceans as it’s the cheapest way to dispose of them. Who will be solving this issue, and when? Will the humanity ever get round to doing this?

– Let’s fantasize together. Imagine that an investor reaches out to you and is ready to give you a trunk full of cash if you answer his question ‘What can you, Professor Mikhailov, personally do for the humanity?..’

– I believe that we have achieved success in our work on a non-reversible sorbing agent. The thing is that there are very many water bodies in the South Ural region which were used in the process chains of industrial enterprises. These water bodies were the places for draining and dumping of the production waste, since it was very difficult and unprofitable to recycle it. There are systems of treatment ponds. Salts and cations of heavy metals settle there, and little by little such water bodies get polluted. As a result they become unsuitable for either swimming in them, or relaxing on their shores, because the salts of heavy metals are actually poisonous. These hydrate, mostly loose their ability to dissolve in water, “settle down” on the bottom, and silt up. Such muddy slush is typical for reversible water cycles. Heavy salts spread across the main storage territory, and start seeping into underground horizons...

– Well, it is possible to install a dredger and start pumping this heavy-metals-saturated muddy mass into a pipe. But we will need to discharge it all somewhere. And where to? One may suggest ‘Let’s discharge it into some old pit’. But what if the horizons under that pit start carrying these poisons all over the place? The only way out is to conserve such a water body, that is to do nothing and secretly hope that, maybe some bacterium suddenly appears and eats it all up? We need to elaborate a special method which would allow to turn this muddy mass into some mineral. A standard example of such a mineral is pebbly layer.

Have you ever examined pebbles up close? They can be pinkish, transparent, or white… These are different minerals, including some wicked ones. But it doesn’t bother us when we go swimming. Why is that? That’s because all of it is incorporated into an insoluble conglomerate, which brings us no harm. Therefore, we need to find a similar way of cleaning water bodies. And we’ve found it. We have developed a mineral composition, which absorbs the salts of heavy metals dissolved in water, cations in particular, and turns them into an insoluble conglomerate.

But here we’ve hit a wall. When we’re talking to someone about our discovery suggesting to hold a scientific experiment on filling some water body with our sorbing agent, a question instantly pops up ‘Who’s going to pay for that?’. Before we find a customer, we can’t attract manufacturers who would be producing the sorbing agent. We have obtained patents, gained experience, and produced the experiment results… But we don’t have a customer.

Professor Mikhailov often hears from people something like ‘Big deal, there’s nothing that hazardous in those water bodies at all’. But just dig a little deeper, and you will find arsenic, nickel, and mercury. And what not! Some of the regions tried to implement this approach. Big funds were allotted, but those were only enough for the so called monitoring – ‘the concentration of salts was at this or that level, and now it’s 0.1 bigger’. That is, we are only observing, but are not taking any response measures. All these ecological issues are of such big scope that big funds are required to start solving them. So these problems keep gathering like a snowball.

In the meantime the sorbing agent created at SUSU can absorb not only salts of heavy metals, but also all the varieties of radioactive actinoids. And it would not release them back! Traditional backfilling of polluted water bodies does not work, according to the scientist. Water is water – even if you cover it with something, new effluents may drain down from mountains. But the substances absorbed with the agent will not go anywhere, they will “stay put”. It is like some sort of burying. Meanwhile the sorbing agent costs very little (the pilot batches were produced from the slags of ferrous alloys). By the way, this sorbing agent may even be pumped into polluted underground lakes. It will “capture” all the radioactive substances, will not let go of them, so they will not be permeating into the underground horizons.

…The Russian Presidential Envoy for the Ural Federal District Pyotr Latyshev once undertook the fulfilment of the project on cleaning the aquatory of South Ural with the use of the Professor Mikhailov’s sorbing agent. He asked the researchers to submit all the documents to him and took those to Moscow. But…he passed away after a cardiac failure, so no one in our country’s capital got to know about the invention of the Chelyabinsk scientists. 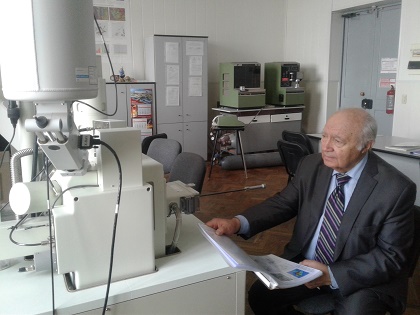 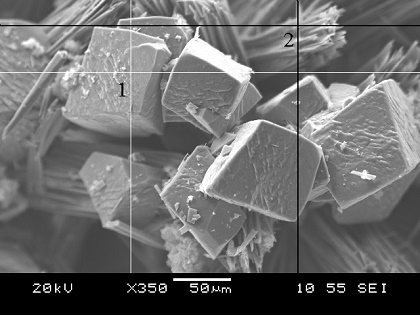 – In water bodies, to which salts of nickel, chrome and iron have been discharged little by little, the silt becomes dirty, and the concentrations reach the maximum permissible values. We obtain good results in the laboratory conditions, and things should work out well in nature, too. I ask ‘Give me a puddle!’ and hear in response: ‘We can’t guarantee the testing integrity, as once we put fencing blocks around a water body, people will steal them the very next day’...

…When you enter Karabash, you see ghastly black mountains. Though there is nothing scary about them really. It is just ferrous glass which does not dissolve in water. It is easy to cope with, as it is not poisonous, professor believes. All you need is take a couple of powerful bulldozers, slightly even out the ground, bring some soil and turf, and then birches may grow there. The main problem are the rust-coloured rivulets which are running down from the mountains and into Miass and Argazi. We need to focus our attention on solving this problem.

Decades-old waste in silt are millions of tonnes of iron sulphide, among other things. When exposed to rain and sunshine, sulphide turns into sulphite, and after that – into sulphurous iron salt. The latter one, through hydrolysis, turns into sulphurous acid, which dissolves everything on its way. And you may find all the elements of the periodic table in the waste from non-ferrous-metals ore beneficiation. Including those elements which humans are better not get in contact with. There is a reason why fish dies there... But we still have no customer. And only the government can act as the customer since the care for clean environment is in their field of competence.

– But let’s get back to plastic. Europe is planning to completely stop using disposable tableware made of this material by 2021. In Russia we hear the appeal to use paper bags in the sales sector more and more often…

– It’s a right thing to do. We still don’t have any serious technology which will allow to recycle big amounts of plastic. But I think this problem will be solved anyway. There’s just no other way. Though in general the humanity has not yet embraced the thought that ‘we need to take care of our planet Earth’. To make it happen, we need to unite our efforts and get down to solving the accumulated problems together. For now, we keep rushing around. We would  seize on the issue of the ozone holes, would write a pile of articles, and then it would turn out that ozone has nothing to do with it. The Earth looses hydrogen, which irretrievably vanishes into the atmosphere – this is, by the way, a real problem. At the moment we do not notice it, but it will become an issue one day. And how can we generate hydrogen? By means of water decomposition. And how much energy is required to perform water decomposition?..

Professor Mikhailov is sure that we will wake up to the reality soon. And it is high time we do that! The Earth is very small. The mankind will completely exhaust its resources in no time at all. Each generation must pause to think ‘What will we leave behind?’. “The mass media raising the issues of ecology is already a good sign. The main thing is to get over the fact that there will be no profit from these investments. On second thought, wouldn’t we all benefit from long life and good health?..”

Tatiana Stroganova; photo by the author and from the archives of Gennady Mikhailov, A i F-Chelyabinsk