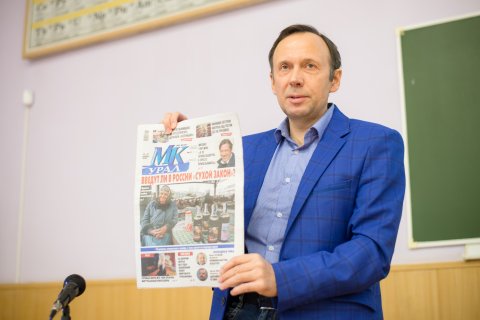 At South Ural State University a masterclass was held by the Chief Editor of Moskovsky Komsomolets – Ural newspaper Aleksandr Skripov, who shared his experience of working in mass media with the students of the Faculty of Journalism of the Institute of Social Sciences and Humanities.

The Chief Editor of MK-Ural Aleksandr Skripov opened the meeting by sharing his understanding of the profession of a journalist, and of the importance of “educating” the future mass-media content specialists by holding of such meetings:

“The most valuable thing that I can do for the today students is to share on certain practical subtleties, and explain what in particular the journalistic work of modern editorial teams includes. Today is exactly two years that I’m working as the newspaper’s Chief Editor, and my total working experience as a journalist amounts to 25 years. Over this time I have gained significant experience, and I believe that I must share it. The students who are yet in the process of learning may become our colleagues one day, and we need to be able to speak one language with them. Before choosing to get a job as a journalist every young specialist must understand if it will be interesting for him/her to ask questions, since a journalist spends every day searching for answers. You must be a fan of your profession and be truly interested in the things you write about.”

During his masterclass Aleksandr Skripov described the trends of the modern journalism, and in particular the transition of mass media into the web space, and the coexistence of newspapers and web-sites. According to the Chief Editor of MK-Ural the Internet mass media should be working 24/7 at present. The crucial feature of web-sites is how fast they provide information, while newspapers work less promptly. Nevertheless, the latter have much more credibility with regard to the information they provide, so it would be premature to say that this format is not in-demand. Moreover, newspapers are developing in a new aspect and start using multimedia content.

Mr. Skripov explained the function of headlines and the requirements to them to the future journalists. He noted that today it is popular to use emotional phrases, like quotes or idioms, and spoke about the impact of such types of materials as clickbait, which is a content mostly aiming at increasing a web-site’s traffic at the expense of the materials’ quality.

Students shared their impressions from the organised masterclass:

“To me it’s important that Aleksandr Skripov gave examples from his journalistic activity. I think that might come in handy in the future, and will help understand how to work with this or that material. It was interesting to learn the process of work of editorial teams of newspapers. I was especially fascinated by the fact that in modern newspapers multimedia elements can be used, and that MK-Ural plans on implementing them in its work in the future,” said second-year student of the Faculty of Journalism of the SUSU Institute of Social Sciences and Humanities Alena Egorova. 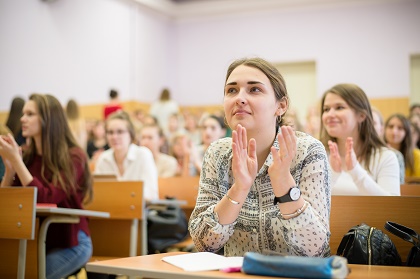 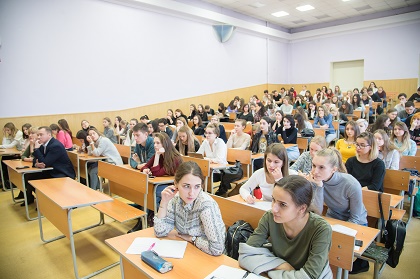 Vice-Rector for Student Affairs Vyacheslav Burmatov commented why it is important to organise such meetings between students and practicing specialists:

“Our university tries to organise meetings for students with people, who are real professionals in their field of activity. This is especially topical for the future journalists since the trends in the world of mass media change at a breakneck speed. Just a little while ago students of the Institute of Social Sciences and Humanities had a chance to live communicate with such well-known journalists as Aleksei Venedikotv and Aleksei Volin. Today we have invited Aleksandr Skripov as a speaker, and he has a colossal professional experience and a good understanding of the issues and problems of modern journalism. We really appreciate the fact that he was the one to initiate this event and share his experience with students.”

Vyacheslav Burmatov also noted that, possibly, in the future masterclasses on more specific topics will be organised, so that the future journalists already now could form an idea of what to expect from their future profession.