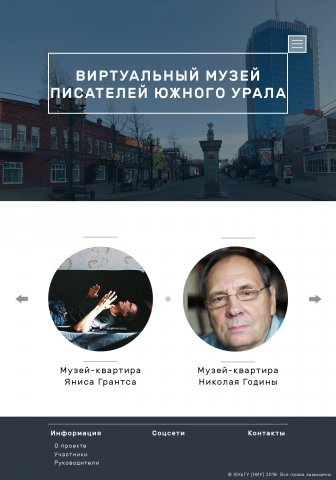 Today, art spaces are moving more and more towards virtual spaces. Many museums in Russia and around the world have their own virtual twins. Of special note are literary museums. Without leaving your apartment, you can visit museums dedicated to Mikhail Bulgakov, Marina Tsvetaeva, and many other authors. In 2018 our university also joined the process of creating such virtual memorial house museums, as part of a focus on project-based learning.

Besides its cultural and educational missions the project of the Virtual Museum of South Ural Writers also has a special mission on contributing into rebranding of the South Ural Region. The literary life in Chelyabinsk is bustling: new brilliant authors are appearing, literary events of various forms and levels are being held, and an anthology of modern Ural Region poetry is being created. A significant amount of literary material has been gathered which needs to be systematised in a form appropriate for the style of the times – online. The project of the Virtual Museum of South Ural Writers is being fulfilled as part of the Digital Humanity international movement, located at the intersection of computer sciences and humanities, and with the goal of popularising humanitarian knowledge through visualisation and the development of electronic products.

Thanks to this new project at SUSU, readers from anywhere around the world can get to know the literary scene of the South Ural Region and visit the homes of the best Ural Region authors. Tatiana Semyan, Doctor of Sciences (Philology), Professor at the SUSU Department of Russian Language and Literature, speaks to us about the idea and history of the creation of the Virtual Museum of South Ural Writers, the first personalia of the museum, how the Department’s international students participate in this project, and much more.

– Professor, how did the idea of a virtual museum come about?

– The creation of literary museums and art spaces has been a big trend over the last few years. Our neighbours in Yekaterinburg have a whole literary quarter, but it features mostly writers and poets of the Central Ural and North Ural regions. Until recently, nothing like this – a unified museum of writers and poets of the South Ural Region – existed in Chelyabinsk. The Department of Russian Language and Literature of the SUSU Institute of Social Sciences and Humanities was the initiator of the creation of the Virtual Museum of South Ural Writers at the university. The virtual format was chosen for a reason – this is the most productive and mobile format. Creating a real museum requires space, infrastructure, and funds. The online space makes it possible to visit a virtual museum without much effort, which means that the virtual version has more possibilities. 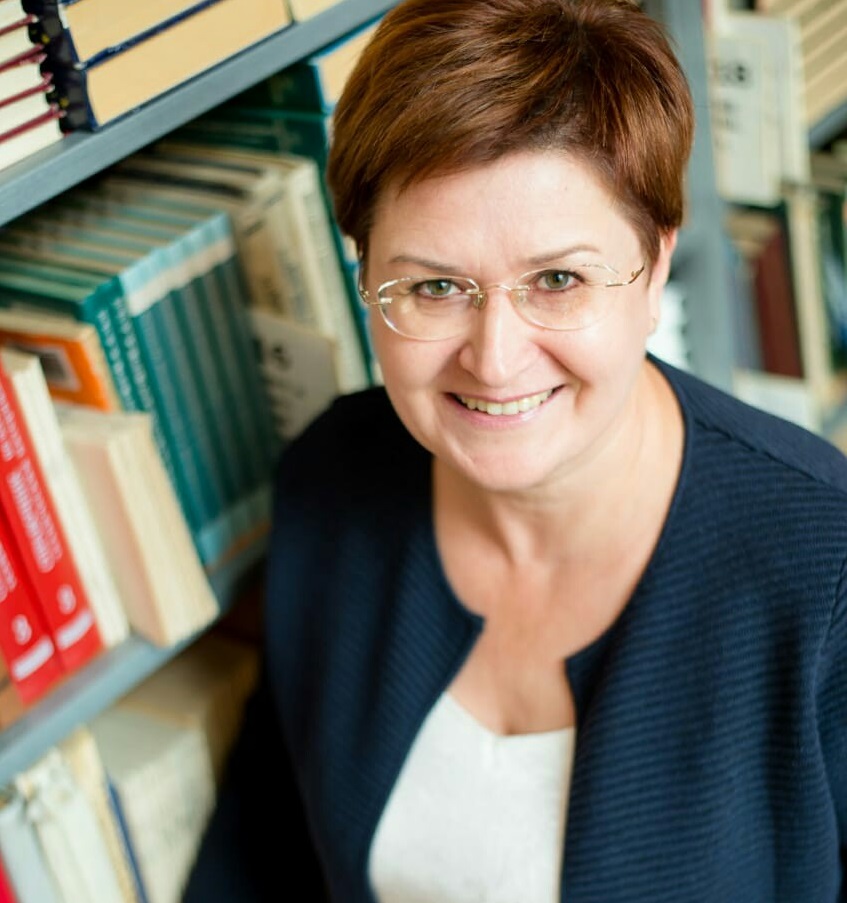 – Who is helping to create the museum?

– The project is centred around teaching students and is an interdisciplinary effort: we have philologists, designers, and programmers working in one team. Master’s students from group СГ-115 are involved in the creation of the virtual museum as part of the project-based learning programme: Artem Shilintsev, Arina Medvedeva, Olga Mayakova, Marina Chernykh, Anastasia Sakharova, Sofia Puchkova, Vlada Batueva, and Azaliya Sharafutdinova. Since we are creating a virtual museum, we are interested in partnering with designers. We have already invited two design students from the Institute of Architecture and Construction and programmers from the Institute of Natural Sciences and Mathematics to the project. The development of a virtual model of the museum, which the designers and programmers are working on, will eventually become the topic of their qualification projects.

Teachers from the Department of Russian Language and Literature are guiding these students’ activity. Step by step, a group of young researchers working on this project is forming in our Department. The Department teachers Evgeniy Smyshlyaev is participating in this project. We are focused on studying modern literature of Chelyabinsk and the South Ural Region. In May 2018, Evgeniy Smyshlyaev defended his candidate thesis on modern poetry of Chelyabinsk under my guidance. As the main commissioner of this project, the Ministry of Culture of the Chelyabinsk Region is supporting our efforts on creating this museum.

– How were the personalia chosen?

– As we were working on Evgeniy Smyshlyaev’s candidate thesis, we identified 30 personalia, although of course there are much more writers and poets in the South Ural Region. In science, we need the material to be structured and systematised. We began with the apartment museums of two writers: a poet from the older generation Nikolai Godina, who turned 80 in 2015, and a media personality Yanis Grants, who is 50 this year.

– What will the structure of the museum be like?

– We are working on a web-site that will host separate apartment museums. We used a similar project by Master’s students of the School of Economics and Management as an example – the virtual memorial house museum of Marina Tsvetaeva. By clicking on this museum, we get to the poet’s apartment. 360-degree photos were taken in the real Tsvetaeva Museum. Thanks to that you can study items of the interior by clicking on them in the virtual museum. We are planning on creating these kinds of interactive, live moments (a copy of the poet’s journal that opens, etc.) in our museum. I won’t reveal all of the secrets of our project, but the design will be interactive. The apartment museums house unique content related to the poets’ creative work: video, text, and audio.

We plan on including interviews with the poets and recordings of them reading their work in the museum. The main idea of the project is to dive into the artistic laboratory of the poets and the unique world of their creativity. We are planning on taking panoramic photos of the poets’ real apartments. We plan on beginning with Yanis Grants’ apartment. We have already gained permission for photoshoot.

Our plan is for the virtual museum to begin at the threshold of their homes. The poet will “open” the door, and we will “walk in”… It’s important to us to show the reality that the poet lives in – the laboratory he works in. Yanis Grants is open to these kinds of experiments. He is consciously mythologizing his own life – he participates in performances and is actively involved in the modern poetic reality of the Ural Region. So it’s no surprise that we chose him as our first subject with which to experiment when creating our first virtual museum. The project will include work in several fields, including scientific study of the poet’s creations and an educational component, in which students will learn to create the content of this museum, work with the content in a virtual space, and learn to analyse texts and write academic essays. This involves the study of the content and visual concepts of the museum, organising poetry events with the authors (creative meetings between the poets and students, etc.), and much more – everything that the transmedia virtual museum project entails.

Our plans for the project include cooperating with Slavicum Press electronic student journal of the University of Zurich’s Department of Slavonic Studies; forming of a grant for the project’s research part; publishing articles indexed in WoS and Scopus; developing Online Text Workshop courses; preparing the electronic publication on Multimedia Technologies in Applied Philology and the electronic textbook on Modern Russian Poetry; publishing a monography on Modern Poetry of Chelyabinsk; and much more.

– Are international students also working on this project?

– Yes, they are. And this is something unique! As part of the project, we organised a creative meeting between Yanis Grants and his international readers – international students of the Department of Russian Language and Literature. Students from Sudan, Elsamani Ibrahim, Mohamed Taha, and Huzeiwa Osman, were reading Yanis’ poems. During this meeting, the readers were able to speak with the writer and find out more about the origins of his creativity and about what inspires him. This was a very important and special experience for the writer to hear how non-native Russian speakers read his poetry. This was a chance to see his creations in a new way and in a different light. 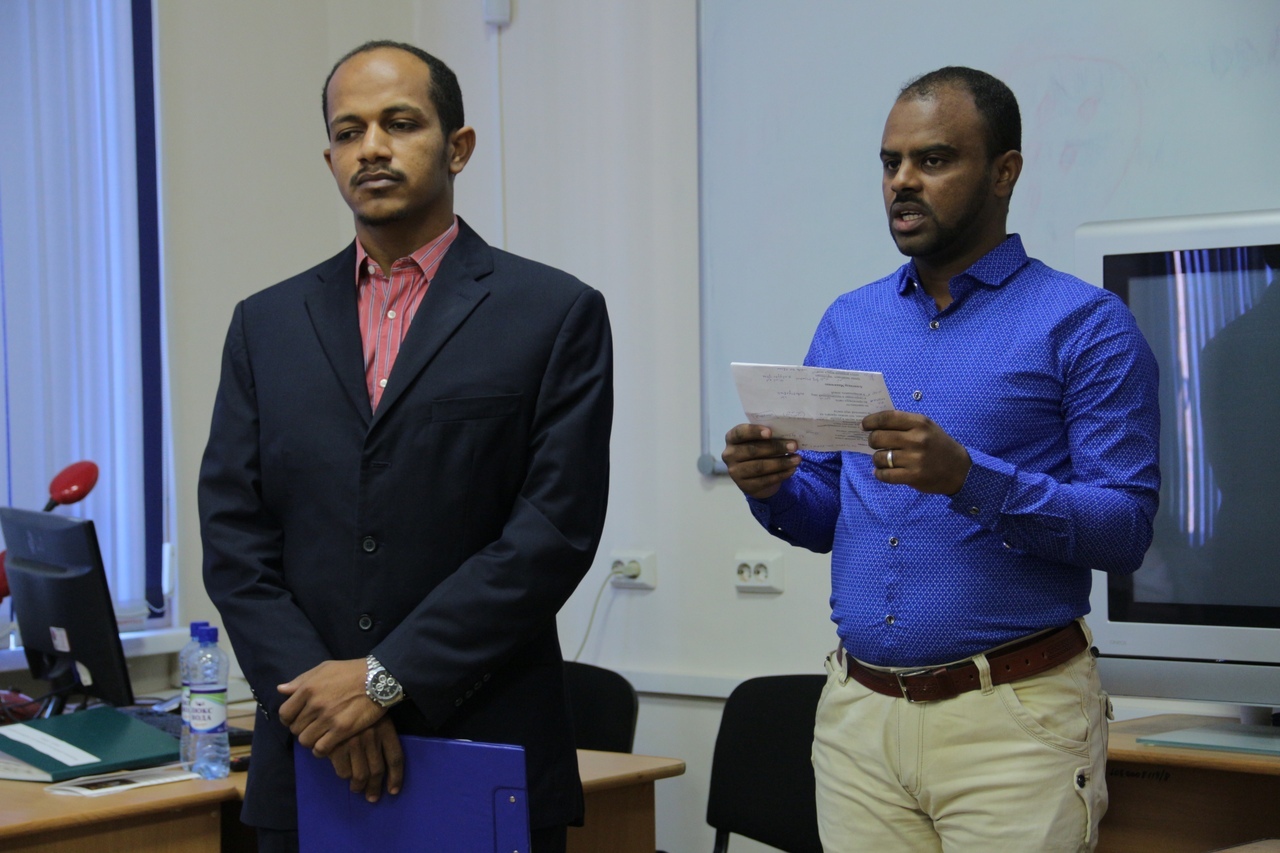 – Will the virtual museum of Nikolai Godina be created by the same principles?

– It will be built slightly differently. In the beginning, we had a qualification project dedicated to Nikolai Godina. Two graduate students helped publish Nikolai Godina’s book “Personal File” (“Lichnoye Delo”) as literary editors. Nikolai Godina presented unique archival materials to the university, which the graduate students analysed under my guidance, edited, and then formed a book and created the whole layout for it. The book was published on the occasion of the poet’s 80th birthday. We will not be doing a 360-degree panorama in the Godina Museum; we’ll only take pictures of his bookshelf and desk – his creative workshop. Some people believe that modern poets write their works on computers or smartphones; both Nikolai Godina and Yanis Grants write in notebooks at their desks.

It’s important to us to recreate the poet’s workspace and surroundings in our virtual museum. We plan on recreating Godina’s workshop as an interactive environment as well. Click the mouse, and the poet’s notebook opens… Modern readers are very interested in visual content, and we are trying to achieve this effect using an applied approach to studying of modern poetry.

– What other virtual apartments will appear in the museum in the near future?

– We plan on this being a long-term project. Of course, the museum’s structure will expand and we’ll add new personalia. With our next group of Master’s students we will be working on a virtual room museum for Aleksandr Samoylov, well-known for his interactive project Route 91 (“Marshrut 91”) on Google Maps. Aleksandr takes the route 91 shuttle to get to work. He dedicated a poem to each stop along his route. These poems are attached to the locations on Google Maps. We want to support and continue this idea by creating a detailed map of this route. We have our own strategy and approach to each poet.

Of course, the Virtual Museum of South Ural Writers can’t do without the iconic figure of Vitaliy Kalpidi. He is the key figure of modern poetry in the South Ural Region today. He was the initiator of many organisational projects, as well as of creation of the Anthology of Ural Poetry. It’s impossible to imagine the panorama of Chelyabinsk’s literary scene without Kalpidi. So we will definitely create a virtual museum for him. We will also create virtual rooms for many other South Ural Region poets and writers. Our region has huge cultural potential! And our goal is to demonstrate this potential to the whole world. Vitaliy Kalpidi is working on this now. We are also moving towards this in our project of the Virtual Museum of South Ural Writers and Poets.

One of the important tasks of our project is to create a positive image of Chelyabinsk – this is our big-scale goal! This project doesn’t only involve teaching Master’s students how to work on projects; they don’t just gain applied skills on the creation of a virtual museum, they also become involved in the cultural life of their native land. We are instilling a high level of culture in them, and this is a very important task!