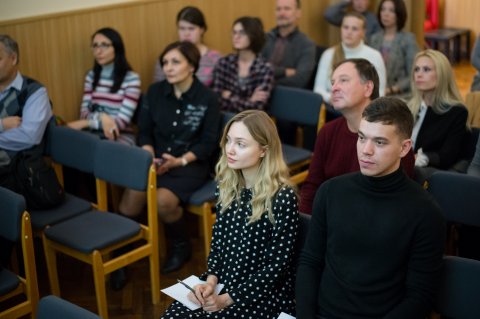 In the course of three days the conference participants were studying the most topical issues on the role of libraries at the institutions of higher education. The current problems and prospects of development were being discussed, as well as the role of university libraries in forming of the students’ system of values, and the issues of publication activity and information competence of the users.

Director of the Scientific Library Svetlana Smolina shares on the relevance of the conference.

“Today it is important for university libraries to determine new fields pf development in the context of the global trend called – digitalisation of science and education. The conference has demonstrated what was achieved by libraries with this regard, and what the status of the SUSU library is in the professional community. It should be noted that our colleagues have recognised (or have expressed their appreciation of) the multi-aspect development of the SUSU library.”

Recently the SUSU library has been focusing on integration with Univeris Corporate Information and Analytical System, what already today allows to automatically register and re-register users, update personal data, print out library cards, provide information to teachers on the availability of books on certain courses and subjects, automatically draw up the reference lists for the working programmes on subjects, and grant access to Antiplagiat.VUZ (University Antiplagiarism) system without the need for additional authentication in the resource itself.

“The Univeris has an option of rendering other library services: registering publications, academic and methodological publications of the university employees with further verification by the library staff, and sending information messages via the e-mailing service. In the future is planned to use the SUSU Corporate Information and Analytical System for putting hold on the most in-demand editions, renewal of the periods of book lending, tracing overdue books and sending notifications to the users on the necessity to return the books they borrowed, and also for remote registration in the electronic resources of the library,” says Svetlana Smolina.

On the first day of the conference a science-to-practice workshop was held on Information and Educational Technologies 2018. The leading experts of the sector discussed the innovative algorithms used to detect borrowings and prevent the artificial raising of the percent of originality, as well as the EDS system of integrated search allowing to search for electronic resources of foreign and Russian providers from common interface. Also a round table was held on the Role of Libraries in Building University Information and Education Environment. At the closure of the events the participants were awarded certificates.

The second conference day included delivering of the presentations. The employees and guests of the university shared their many-years experience, as well as suggested various ways of solving the most pressing issued of modern libraries.

An exhibition of educational literature was organised jointly with the representatives of publishing houses Infra-M, Knorus and IPR Media.

The third day closed with a master class by a consultant of Elsevier publishing house Galina Yakshonok regarding the Ways of Improving Efficiency of the Scientific-and-research Process through Using Scientometric Tools (SciVal). This event was organised mostly for the SUSU researchers who are planning their international scientific activity or are actively conducting it.

SciVal allows to find, trace and visualise the current trends in different fields of science, including with regard to the publication statistics of the SUSU employees. SciVal provides an opportunity to analyse the main trends in the scientific-and-research activity of the university and other leading Russian universities, to search for potential partners for joint research, and to visualise the statistics on publication activity and citation.

“I think the conference was successful. First and foremost it is important that the event was attended by more than 100 people representing university libraries of Chelyabinsk and the Chelyabinsk Region, Yekaterinburg, Omsk, Tymen, Samara, and other cities of Russia. The informal communication with our colleagues made us more confident about the chosen path of development of our library and of the further fulfilment of the goals and tasks set before us,” shares her impressions Director of the Scientific Library Svetlana Smolina.

Let us stress once again that the conference was organised by the SUSU Scientific Library jointly with Lan publishing house, Association of Manufacturers and Users of Electronic Educational Resources, JSC Antiplagiat, EBSCO Information Services company, and Elsevier publishing house.