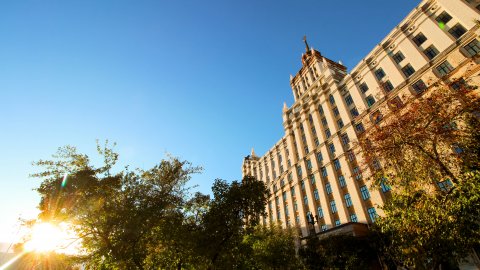 Annually, the prestigious ranking agency QS Quacquarelli Symonds publishes ratings of the world’s best universities. In October 2018, QS BRICS 2019 regional ranking was released and the published part of it included about 400 universities from Brazil, Russia, India, and China. In the course of five years, South Ural State University has been a regular participant of this ranking and has been showing just the positive dynamics. So, this year the university improved its result by 26 positions in comparison with the previous edition, having risen to the 112th place.

SUSU takes the best result in terms of the “Percent of Foreign Students” indicator, which is explained by the strategic work of the university in attracting foreign students and the desire to provide all the conditions for their study and life in Chelyabinsk. The university also showed growth in terms of the “Ratio of the Teaching Staff to the Number of Students,” which confirms that the university creates a comfortable educational environment for students. The growth of the indicator “Proportion of Foreign Employees” reflects the strengthening of SUSU positions in the international arena, as well as the rise of the university attractiveness for foreign scientists and researchers.

It should be noted that in the course of the ranking compiling, eight indicators are being assessed: academic reputation, reputation among employers, ratio of the teaching staff to the number of students, citation index and percent of publications per teacher, as well as percent of foreign employees, foreign students and PhD employees. At the same time, the reputation of the university is the most important indicator affecting the final position in the ranking. One of the main goals of this ranking is to track the development of BRICS countries universities in the frames of higher education, as well as their comparison between each other, what allows students and scientists from around the world choosing the best universities for further study or work.