SUSU Representatives Discuss Cooperation at the Consulate General of China 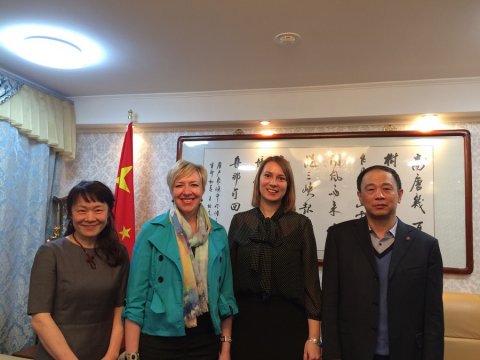 The Head of the SUSU International Affairs Division Olga Yaroshenko and the Head of Pushkin Institute Research, Education and Coordination Center Yadviga Berezovskaya visited the Consulate General of the People’s Republic of China in Yekaterinburg.

The SUSU representatives held a work meeting with the Consul for Education at the Consul General of the People’s Republic of China, Doctor of Sciences (Philosophy) Zhao Yan. Both parties discussed the most topical issues of cooperation and prospects of a more profound partnership in the future. They also discussed opening offices of Pushkin Institute at Chinese universities what could support popularization of the Russian language in the People’s Republic of China and boost Chinese students’ interest in obtaining higher education in Russia.

Currently, 217 students from the People’s Republic of China are studying at SUSU under main academic programs and at preparatory courses. In 2017, more than 30 meetings and round tables on science, education, government, and business were held at the university with representatives of 20 countries, including representatives of the People’s Republic of China. Within the frameworks of those meetings, the university’s top management and government representatives discussed SUSU’s policies with regard to foreign students’ presence on the territory of the Russian Federation, creation and fulfillment of programs on teaching Russian language, help for international students on parts of consulates, as well as possibilities of working on joint projects, and prospects for bilateral collaboration.

SUSU has vast network of international partners, cooperation with whom helps add to and develop key areas of knowledge through joint research and academic projects.