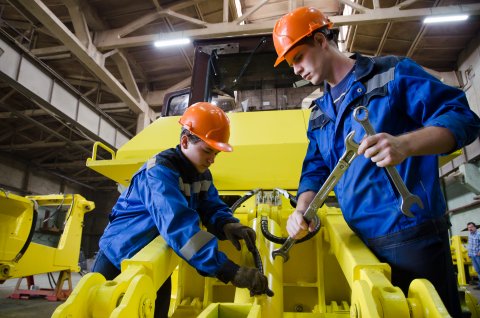 Starting from September of 2018, SUSU has been officially implementing the technology of project-based learning in master’s studies. Managers of the project – Director of the Institute of Social Sciences and Humanities, Doctor of Sciences (Philology), Professor Elena Ponomareva and Dean of the Faculty of Energy and Power Engineering of SUSU’s Institute of Engineering and Technology, Candidate of Sciences (Engineering), Associate Professor Aleksandr Shishkov, told us about premises of implementation of project-based learning at the university, its inclusion into the strategy of SUSU development, as well as of its structure, project team and prospects of development.

The path to university 3.0

The majority of objectives, for example, development of fundamental science, integration of SUSU into economics of the Big Ural, etc. are going to be solved directly in the frameworks of project groups. Digital transformation of the university assumes creation of a web-platform called “digital cloud”, to which all projects will be uploaded; execution of projects themselves is as well impossible without the use of modern digital technology. International cooperation of SUSU is actively developing in project activity in both humanitarian and engineering spheres: this is a unique institution with multiple possibilities – from resources of fundamental science to the global digital environment; therefore, project-based learning as the educational model is the most natural for such mega-university.

E.P.: Preparation for a successful launch of project-based learning at SUSU had been carrying out during several years. Within a year, a team called “SUSU Think Tank” had been conducting intensive preparatory work on elaboration of the educational model and its defense at expert councils and in the MAI Management School. Intensive work on elaboration of study plans has been conducting for a year, project documentation has been improving for successful functioning of the project, teams have been being selected; the mechanism of interaction between structural subdivisions that take part in the common project has been being coordinated.

А.Sh.: Previously, the discipline called “Project-based learning” was implemented in a study plan of a number of subdivisions of engineering sphere as an experiment. At the Department of Economics of Business and Project Management (Head of the Department is Natalya Dzenzelyuk), the discipline of Project Management has been being taught for more than 15 years. A significant knowledge background has been accumulated in this sphere, and a series of joint projects with enterprises of the region (Fortum etc.) has been implemented. Besides, project activity in a test mode started in the Laboratory of Additive Technology of the Institute of Engineering and Technology, in ISSH at the Faculty of Journalism, at INSM within a joint project with MMK PAO (the project entitled “Reagent-free photocatalytic water treatment in order to remove oxidation-resistant pollutants”), etc.

Starting from the new academic semester of 2018, project-based learning is going out of local format to a new level of higher professional education and acquires status of a educational model. This phenomenon will cover the entire university.

E.P.: Starting from September of 2018, the selective discipline of Project Management is to be implemented into study plan of students majoring in humanities as well, as they require competencies in the sphere of project management. Moreover, the team of the Department of Economics of Business and Project Management offers the course on Project Management for research and academic staff. This is a very important element for supporting all of us; the necessary theoretical background without which successful implementation of project-based learning on a qualitative scientific basis would be impossible.

We aspire to transformation of the university according to the model approved at the strategy session regarding Engineering 3.0; therefore, we do not set the goal to strictly differentiate projects by dividing them into engineering and humanitarian. The advantage of project-based education implementation at our university lies in its interdisciplinary nature: the teams consist of engineers and programmers, economists and markeologists, philologists and journalists, designers and architects, etc. Synergistic effect here is very important.

А.Sh.: Other universities focus on specific study areas. In our university, both engineering and humanitarian component are well-developed; our advantage is in implementation of interdisciplinary approach to project-based education based on digital platform.

E.P.: When making decision about launching each project, we referred to specific parameters, set at the moment of forming the contest of projects.

The focus was on interdisciplinary nature of a project, on its applicability, demand, relevance, on mandatory presence of external customer. Among customers of the submitted projects are industrial enterprises – partners of SUSU (Emerson, MMK, SMS-group, European Journalism Training Association, ministries and administrative bodies of the region, and others). In a number of cases, SUSU is acting as a customer under condition that the project is important for the university. As a result of the project, specific product must be obtained: technology, matrix, model, or software product.

Another mandatory condition is that each project must have only one supervisor.

Also, it is very important to comply with all technical parameters provided in project application. Let us remind that the goal of project-based learning is to obtain professional competencies and skills by working on a specific project; therefore, project application must provide explicit description of its scientific and practical components, distinctly determined objectives and work deadlines, intermediate and final results. Initially, there were more than 60 project applications, but many of them didn’t pass an expertise due to technical causes, as they had been filled in without taking into account technical requirements. As of today, 29 projects have been launched, and decisions about launching each of them were made collectively. See the Register of projects.

А.Sh.: Each project team should consist of not less than five students, because during their participation in a project they must obtain skills in teamwork. The main goal of project-based learning is to acquire new supplementary competencies together with those intended by the education programme; these competencies get determined in a result of interaction with employer, upon his “request”. By the time of graduation, each master’s degree student should have a portfolio. This is one of the key moments in encouragement to take part in project-based learning. Students voluntarily submit applications for participation. If a project is not interesting and a student does not keep up, he or she can quit the team and keep studying according to one’s educational trajectory. By the end of studying in master’s degree programme, the team is supposed to evolve and promote their practical and scientific inventions. In this case, employer gets both the finished project and the team of professionals.

E.P.: The major scope of projects is going to be implemented within master’s programmes. There are a number of reasons for this. First, master’s degree students have already formed their professional competencies, which means that their work within a project will be more conscious. Second, the two-year period for completing a project-based learning programme is maximally suitable. During master’s studies, students in a comparatively short period of time (two years) can acquire new competencies and get employed while already having a portfolio with serious professional achievements and real skills.

E.P.: The project team is a super team. It consists of several components. Project-based education is a pet project of Rector Aleksandr Shestakov. The work on the project began at the strategic sessions of SUSU, and further on, under the guidance of Vice-Rector for Academic Affairs, Adrei Shmidt; the model was being developed by the participants of the SUSU Think Tank – the university team who took training in Management School at Moscow Aviation Institute (MAI). Today the team is headed by Vice-Rector for Academic Affairs, Andrey Radionov. Aleksandr Shishkov and I are the project managers. The team also includes Head of Academic Services Department, Igor Sidorov. Project-based learning supposes principally different approach to elaboration of study plans. Now students within project-based learning have the right of choice. Students themselves determine their educational trajectory and select disciplines in their part of the project. Study plan becomes adjustable. Academic Services Department and Igor Sidorov personally greatly contributed to development of the new matrix. Moreover, all the Directors of Schools and academic secretaries were working on the new adjustable study plans. The Quality Assurance Office also actively works as part of the team (the Office Head is Dmitry Kharitonov, Deputy Head is Maksim Nesterov).

A very efficient and important part of the team are the people who share the ideology of project-based learning and who do very much for that: Directors of the Institutes and Schools, the project-responsible persons within the Institutes and Schools. It is very important for us to avoid obstacles and work as a team. In order to make timely and quality decisions, a seminar-meeting on the project-based learning fulfillment is organised, among the participants of which are projects’ supervisors, academic secretaries, and heads of the structural subdivisions. The meetings within the seminar will be held twice a month. The first meeting was held on September 19.

E.P.: The Digital Cloud of Projects, which is being developed under supervision of Vice-Rector for Informatization, Leonid Sokolinsky, is going to be a venue of the customer and the project team. The customer uploads an order – a project which he would like to bring out to outsourcing and implement at SUSU - to the cloud.

Also, the Register of finished projects and a list of applications submitted by participants of potential projects are going to be uploaded to the cloud. Project supervisors will be able to choose a team using the cloud data. Students themselves can act as project customers as well. After uploading of an order by a customer, the system will notify all students possessing corresponding competencies about a new project. Initiative school students can be participants of projects as well – and this is the guarantee that interested school leavers with high examination scores, who got engaged into such activity and came to love the university, will come to us as university applicants.

One of the main ideas of project-based learning is significant reduction of bureaucratic component. Project team should be formed bypassing all bureaucratic structures. Today, active work is being done on creation of the Digital cloud, and it is going to start operating in the nearest future.

Project manager – Dean of the Faculty of Energy and Power Engineering of the Institute of Engineering and Technology, Aleksandr Shishkov
E-mail: shishkovan[at]susu[dot]ru
Tel.: (351) 267-92-51