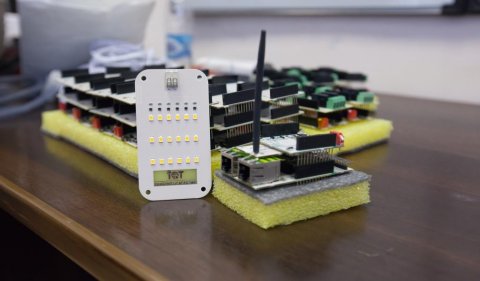 The signing of an agreement on the opening of Samsung IoT Academy program at the South Ural State University School of Electrical Engineering and Computer Science will be held on June 26th at SUSU.

This agreement is the result of successful selection of SUSU’s application to participate in a project on the development of a center of expertise on the Internet of Things and data mining being realized by Samsung Company in the leading universities in Russia.

The Internet of Things (IoT) is a concept of organizing the interaction of physical objects (“things”), devices and systems among themselves and with the environment by using various technologies of communications and connection standards. Today, the term “Internet of Things” includes personal electronic devices, smart building systems, technologies of the industrial Internet of things, smart city systems, and much more.

“’Samsung IoT Academy’ is a long-term social and academic project by our company aimed at training students in the technology of the Internet of Things and intelligent database analysis at leading universities in Russia. Teaching young IT specialists who are familiar with the latest technology trends, especially the Internet of Things, is one of the most important areas of our work. Connecting equipment is of key importance in various fields from transport to health services. Our goal is to train specialists who can develop these spheres and move in to the digital future alongside Samsung,” noted Sergey Pevnev, Director of corporate projects and partnerships with governmental authorities of Samsung Electronics.

As part of the project implementation, Samsung offers complex support of the academic process, including:

“For SUSU, the opening of Samsung IoT Academy program is a big step in the direction of solving one of the university’s key goals: offering research and academic support for the Ural region to move to the Industry 4.0 platform. Specialists in the sphere of Internet of Things technology and methods of big data mining are more in demand today than ever before. They are needed in industrial enterprises for the support of automation processes, they develop solutions for smart buildings and cities. The Samsung IoT Academy educational program, based on a project-focused approach, and the support of this program with advanced IoT platform equipment of Samsung Company allows us to take the training of such specialists at the SUSU School of Electrical Engineering and Computer Science to a new level of quality,” noted SUSU Rector, Aleksandr Shestakov.

The agreement signing and press conference will be held at room 1007 of the main building of South Ural State University on June 26th, 2018 at 11:00.

After signing the agreement, Tatiana Volkova, leading specialist in academic projects, author of the Samsung IoT Academy course, will hold a master class, in which anyone can take a first-hand look at devices of the Internet of Things and see how data from measurement devices look. The master class will be held in room 1001 of the main building of South Ural State University on June 26th, 2018 at 12:00.

South Ural State University (National Research University) is the center of academic, scientific, cultural, and sporting life of the South Ural. SUSU includes 9 institutes, 3 schools, a faculty of military training, and a faculty of pre-university training. More than 40 thousand students study at the university and its branch institutions. The academic process is provided by more than 5000 lecturers and staff, including more than 360 professors and doctors of sciences, 1600 candidates of sciences and associate professors. More than 200 areas of education are offered for bachelor’s students, master’s students, and specialists. In October 2015, as the result of a competitive selection process, SUSU entered the group of leading universities selected for Project 5-100, the goal of which is to maximize the competitive positioning of these universities in the global market of educational services and research programs. You can find additional information on SUSU on the website: www.susu.ru.

Samsung Electronics Co., Ltd. is one of the leading manufacturers of televisions, smartphones, personal electronic devices, tablets, cameras, household electronics, medical equipment, network systems, semiconductors, and LED solutions. The Company’s offices are located in 79 countries around the world. The Company has been operating in the Russian market since 1991. The headquarters of Samsung Electronics for CIS countries is located in Moscow. In addition, the Samsung Research Center operates in Russia. The Company’s factory producing Samsung consumer electronics successfully operates in the Kaluga region. In May of 2018, the Company opened the Center of Artificial Intelligence in Russia, which augmented the portfolio of divisions of Samsung Research and became the fifth overall among Samsung’s research centers around the world. The Company is also developing cultural, social, and educational initiatives around Russia.