Healthful Yogurt is Created at SUSU With the Use of Ultrasound 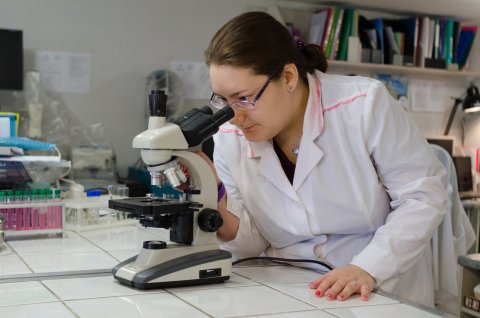 Healthy lifestyle is not just a complex of healthful habits and exercising. Healthy nutrition requires special attention as well, think researchers of South Ural State University. Precisely in this area, a series of the most prospective research projects are implemented nowadays.

Among the project is one entitled “Modification of yogurt technologies in order to enhance its functional properties”. Scientific supervisor of the research is Doctor of Engineering Sciences, Professor Irina Potoroko. Author of the project, a master’s degree student of the Department of Food and Biotechnology from SUSU’s School of Medical Biology, Daria Uskova, told us about properties of the new product and about technology of its production.

The new product is created with the use of ultrasound

“We are working on creation of a fermented milk product, the yogurt, with increased content of kefiran. Kefiran is an exopolysachharide produced by some lactobacteria. An increase of its content in the finished product is provided due to the use of ultrasonic cavitation during the stage of processing of milk which is used as the raw material.”

“Ultrasonic waves, when distributing in a medium, bear a bigger mechanical energy; they can cause coagulation of proteins and accelerate chemical reactions. They are also capable of causing instant mechanical destruction of microbic cells; bacterial microflora is very sensible to their exposure. Therefore, by exposing the food medium to ultrasound, we can reduce the process of pasteurization,” explains Daria Uskova. “In the result, we obtain milk which is totally safe for our organism, and which does not contain any alien microorganisms. The time for yogurt production is significantly reduced due to implementation of ultrasound.”

What effect does kefiran have on human organism?

The main advantage of the new product in comparison to analogous ones is in increased amount of kefiran. It has a favorable effect on gut microflora, stimulates activity of healthful microorganisms and prevents various diseases. Kefiran also supports the immune system, possess antimicrobial and wound healing properties, imposes inhibitory effect on pathogenic microorganisms.

“At the present time we are considering other techniques for producing fermented milk products. For example, adding to yogurt some biologically active substances which can enhance its functional properties. Among such healthful substances is fucoidan. It kills virses and infections, supports the immune system, slows down aging processes and suppresses irritation. When producing this product, we use complex approach: we add fucoidan while applying ultrasonic cavitation.”

A patent for invention of the new product has already been obtained. Further plans of the researchers are connected with its implementation into mass production. At the moment, significant part of research of School of Medical Biology is connected with the use of biologically active substances. Fashion for healthy lifestyle requires expanding the assortment of healthful nutrition products, and researchers from SUSU are capable to satisfy this demand.