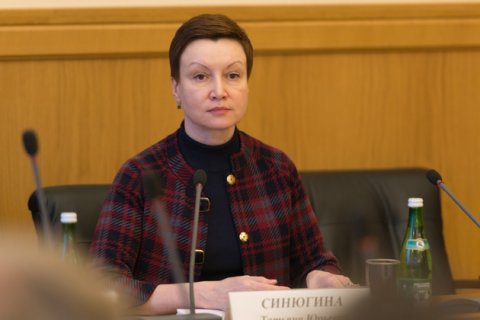 T.Yu. Sinyugina stressed that the creation of the necessary environment for providing education, training, and rehabilitation to children with disabilities is a priority area of work for the Russian Ministry of Education and Science. The Deputy Minister reported on the results of work in this field.

Tatiyana Yuryevna explained that it is not just the number of students with disabilities that is important, it is “very important that the children have a truly high-quality education equal to their peers.”

“When we speak of efficacy and quality of education in inclusive classes, the creation of these conditions is one of our top priorities not just in general education in schools but also in professional education,” says T.Yu. Sinyugina.

Tatiyana Yuryevna noted that 2017 was the “year of foundation” for a network of academic resource centers for training individuals with disabilities (ARC). In 2018, the ARC network will expand.

The Director of the Department for Public Policy on Higher Education of the Russian Ministry of Education and Science A.B. Sobolev offered more information at the meeting on the development of ARC. He clarified that in 2017, 13 ARCs were founded at locations under the jurisdiction of the Russian Ministry of Education and Science. Each ARC has a “zone of responsibility” – a list of entities in the Russian Federation regions in which the ARC organizes work in increasing the accessibility of higher education for individuals with disabilities.

A.B. Sobolev informed the audience that agreements on increasing the accessibility and quality of higher education for individuals with disabilities were signed with 190 universities.

The participants of the meeting also discussed the necessity of amending the regulations on the psychological, medical, and pedagogical commission and the FRCs’ complex support of children with disorders of the musculo-skeletal system and eyesight.

The participants also approved the members of work groups under the Council of the Minister of Education and Science of the Russian Federation on Issues of Educating Individuals with Disabilities and the Council’s plan for 2018.

Within the realization of the State Program of the Russian Federation “Accessible Environment 2011-2020”, approved by Decision No.1297 of the Russian Federation Government as of December 1, 2017 a network of Academic Resource Centers for the education of individuals with disabilities was formed. In the higher education system, ARC serves as a resource that universities can use to increase the accessibility and quality of education for individuals with disabilities.