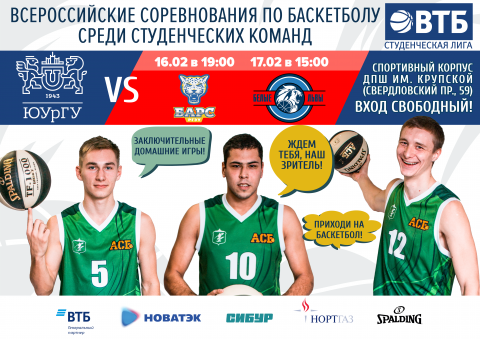 On February 16-17, SUSU-Chelbasket team will play final home games in the VTB Student league in season 2017/18.

The SUSU-Chelbasket student team of the city of Chelyabinsk will host teams from the middle of the VTB Student league’s standings on their court: they are teams BARS-RGEU from Rostov-on-Don and BGTU from Belgorod.

In the ongoing season, SUSU-Chelbasket team played 20 games with 4 wins. Despite the 13th place in the VTB Student league and a lot of games lost because many injuries in this season, our city’s team demonstrates spectacular basketball, and is close to winning over their opponents in each match.

Opponents of the Chelyabinsk team, BARS-RGEU and BGTU, placed 8th and 9th correspondingly, each have 12 wins and 13 loses. It should be noted that our opponents for the final home games in the season are correspondingly competing against each other for making to the final 8 of the VTB Student league.

We invite basketball lovers to support the team of their city and university in all-Russian basketball competition among student teams.

Competition venue: sports hall at the Palace of Pioneers and Pupils named after Krupskaya (59 Sverdlovskiy Prospect)

SUSU Chelbasket Team is a Chelyabinsk student team, a joint project within the framework of collaboration of the Municipal Autonomous Institution Basketball Club “Chelbasket” and South Ural State University aiming at joint development of physical education and sports in Chelyabinsk, as well as of student associations, and which provides an opportunity for young talented athletes to prove themselves at high-status competitions.

Thanks to support from the titular sponsor of the League, VTB Bank, a competitive and educational atmosphere has been created, supporting the progress of all involved. Players receive the chance to regularly compete with high-level teams while not forgetting about their education. Coaches can improve their qualifications by attending master classes and workshops, learning the best methods and practices. Managers of these student basketball clubs will complete training in a special program and receive certain subsidies.

Student Basketball Association (ASB) is the biggest student sports league of Russia and the world’s second as per number of teams. Every year it holds over 4,000 matches in 69 Russian Federation entities where 800 male and female teams participate. Only amateur athletes take part in the Student Basketball Association Championship. ASB trains managers, holds an annual Stars Match, 3x3 tournaments, and the ASB FEST. The best ASB players enter the national team and compete at international tournaments. Managers participate in a competitive program, and the best of them receive grants.